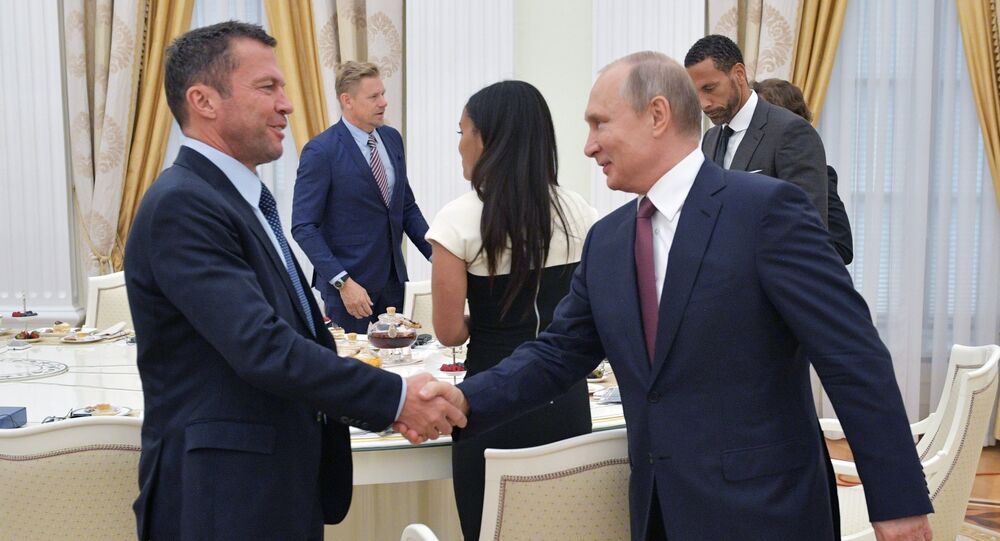 On the sidelines of the World Cup, Lothar Matthäus, a former German football player, is traveling across the tournament’s host country. In particular, he met Russian President Vladimir Putin and shook hands with him for a photo. In doing so, he apparently angered the newspaper Bild. However, Matthew countered its criticism like a true champion.

Apparently, Julian Reichelt, Bild's chief editor, didn't like the fact that Lothar Matthäus, who also contributes to the newspaper, was photographed with Russian President Vladimir Putin. Julian's article states that Matthäus shouldn't have "shaken bloody hands" with Putin. The article also says that "the worst world's regimes would buy these tournaments with their unlimited funds."

However, Matthäus couldn't just sit back. The former German team captain tweeted a photo showing the hypocrisy of the newspaper's management. The picture shows Kai Diekmann, the former chief editor, Nikolaus Blome, the deputy chief editor, and Vladimir Putin. In the photo, Blome is shaking hands with the president, and Diekmann is in a good mood.

That was a classic own goal of the Bild: while the newspaper's article got just under 80 likes on Twitter, Matthäus's response generated 1,400 likes. Also, Bild's management has been hit hard by the Twitter users — someone called it a "golden goal", and there was even someone who said: "That's quite a counter-attack. Bravo, Lothar."

Someone's probably a sore loser: Kai Diekmann, the former chief editor of the Bild, griped that Lothar Matthäus should pay a fine for reposting the Diekmann-Putin photo because he doesn't hold the copyright for the picture. That didn't go down well with the Twitter community: "Kai, just take a breath," one user replied. Another user comments: "Oh Kai, you'd better keep silent now." Matthäus also repeatedly offered financial support in case he has to pay a fine.

@argonerd tweeted: "A very weak comeback! Don't worry, Mr. Diekmann, the community here would definitely support @LMatthaeus10 if it comes to that. It's a matter of honor!"

@TeilZeitMensch tweeted: "The internet works like this: if something's really good, you have to pay for it. If Lothar now has to pay because he's used that picture, we'll launch a campaign here on Twitter. Everyone donates €1 for the good joke and Lothar will get twice the money. That's it!"But then Diekmann went below the belt. First he responded to the donation appeal with: "What, so it's not him??? That would be unfair of you!" And then when a Twitter user drew attention to the fact that Matthew could easily pay the fine from his own pocket, Diekmann continued by saying: "Wouldn't he be smashed up after that????"

© Sputnik / Ramil Sitdikov
England Making History at 2018 FIFA World Cup - Head Coach Southgate
And what about Lothar Matthäus? He said nothing of his Twitter comment. However, he tweeted a meaningful post that didn't directly address Bild's allegations: "Politics and sports can't be separated, but for us athletes, only the peaceful and fair competition counts. The Russian people have organized a fantastic World Cup…"
The consequences of the dispute are still unclear for Matthäus. There's no official statement by the Bild yet. However, the former German footballer can be sure that his fans will still support him. And Bild has once again proven that double standards are its most favored tool.
...
Reddit
Google+
Blogger
Pinterest
StumbleUpon
Telegram
WhatsApp
401