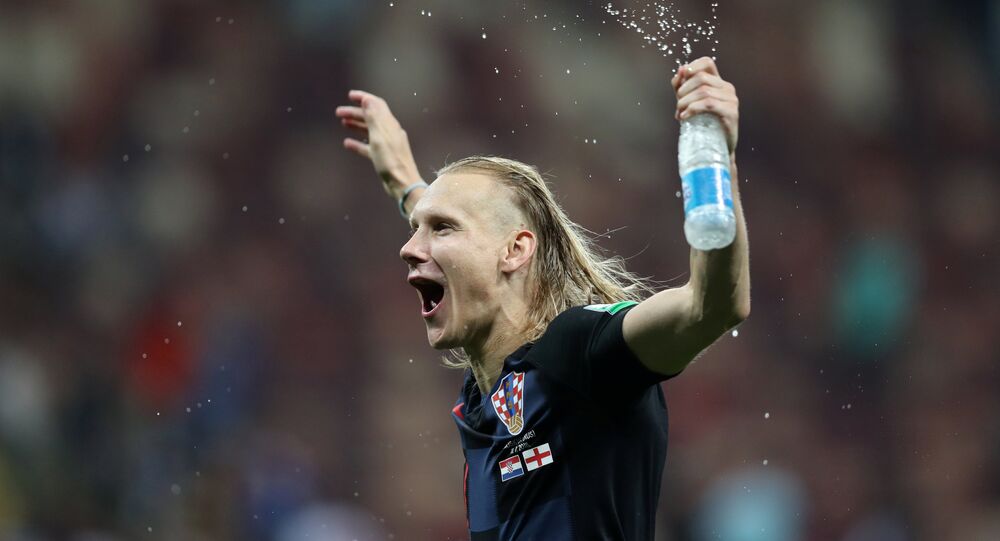 A video has recently emerged on social media, in which Vida was filmed shouting the controversial slogan "Glory to Ukraine!" after Croatia beat Russia in the World Cup quarterfinal. The comments sparked a backlash in Russia, with fans booing Vida every time he touched the ball in Tuesday's semifinal.

Croatia defender Domagoj Vida apologized to Russians for the words he said after his World Cup quarterfinal win over Russia.

"I know that I made a mistake. I didn't do it on purpose. I would like to apologize once again to the Russian nation," Vida said.

The 29-year-old added that his side had a very difficult game. "There is one more game ahead," he said, promising that the team would play for the people of Croatia and do their best to win.

The Croatian was booed and whistled at every time he touched the ball in Tuesday's clash with the Three Lions.

Domagoj Vida has been in the spotlight in recent days as he appeared in a video which showed him saying "Glory to Ukraine!" The slogan became associated with anti-Russian Ukrainian nationalists amid the 2014 political coup in Kiev which brought down the country's elected president and prompted pro-independence movements in the east of the country as well as Crimea's decision to re-unite with Russia.

In another video, which emerged after Croatia's win over Russia on Saturday, the defender was seen in the locker room shouting "Glory to Ukraine!", while Croatia assistant coach Ognjen Vukojevic was dedicating the victory to Dinamo Kiev and Ukraine.

Vukojevic was sacked by the Croatian Football Union and slapped with a $15,000 fine by FIFA. Vida escaped a ban from the world football's governing body and played against England in Wednesday's semifinal.

Croatia will face off against France in the World Cup final at Luzhniki Stadium in Moscow on July 15.