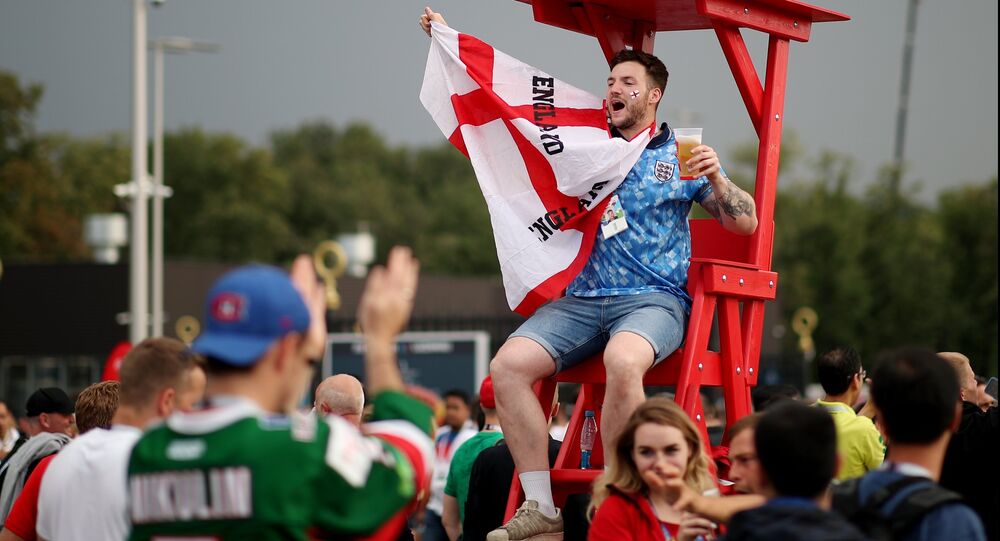 Tunes of the Tournament: 'Football's Coming Home' and Beyond

The volume has been turned up in Moscow, as England fans celebrate the semifinals in advance. A colorful selection of songs is being sung throughout the city. Here’s a sneak peek.

As the coveted match between England and Croatia draws nearer, the streets of Moscow are alive with songs, chants and dancing. England fans have shown up in full force, far better represented than the Croatian fans at this point. Sputnik asked fans, whose voices were hoarse from singing (read: shouting), to provide some insight about the background to some of the most popular songs of the 2018 tournament.

England's Going All the Way

Wooah-oh, drinking all your vodka,

Wooah-oh, England's going all the way!

This song is particularly popular with the Russians, many of whom have used it as a handy tool in learning how to count to four in English. This particular ditty first arose in Russia. Connie from Nottingham, or "Nottingham Connie," claims that he invented it while taking a bath, but that is widely debated and should not be taken as a fact. Still in its infancy, this song has spread like wildfire during the 2018 tournament, becoming one of the most frequently used riffs.

I just don't want to go to work,

I want to stay here,

Drink all your beer,

There are two versions to this song, one of which is significantly more "PG" than the other. Depending on the crowd, the word "beer" can be replaced with "gear," or the Russian word for beer, which is "pivo." This one is normally sung with quite a melody, until the word "home," which comes out in a tuneless wail. This song originates from the European championships of 2016. Commenting on the song is Nick from Leicester, who says "that's a good one that."

​We're on our Way

We're on our way

To Moscow, on our way,

How do we get there I don't know,

How do we get there, I don't care

All I know that England's gonna win."

READ MORE: Britain Beware? 'We May be Drunk — but We Ain't Hooligans!' (PHOTO, VIDEO)

This song has been sung throughout the entire tournament.

The sesh is on in Moscow ahead of #CROENG but I don't think he knows the words! #WorldCup #ENG pic.twitter.com/CNq82M0sWD

This one is just a general English football song, rather than an England song. It has been largely absent from the tournament so far, but today, with the onset of all the new fans flying out for the semifinals, the song is being sung.

Your defense is terrified,

Your defense is terrified.

This is an amendment of an old song from Northern Island, though Chris from Liverpool argues that it could originally stem from Wigan Athletic. The word "Harry" could be replaced by any one of the following: Harry Kane, Will Griggs, etc. Though John says that the name used should normally be that of a striker, given that the defense is "terrified."

This song is one of the more tuneful on the England mixtape and really rouses the crowd, often accompanied by some dance moves.

England ‘Till I Die.

"England till I die,

I'm England till I die

I'm England till I die."

You Still Turn Me On

"Looking back from where we first met,

I cannot escape, and I cannot forget,

You still turn me on,

"That is from here, from Russia," promises Dave from Nottingham. It is his favorite — but why? "It's unique, different." Dave is right, it is rather unique and different. But not everybody has heard of it. John says, "I've never heard it before." A debate swiftly ensues. "That's an Atomic Kitten song we think maybe." "Is it an Atomic Kitten song, is it?' A short discussion of Kerry Katona follows, and we all agree that it is probably a remix of an Atomic Kitten song. This particular song is one of the harder songs to get started. Once it gets going however, it can be immensely powerful.