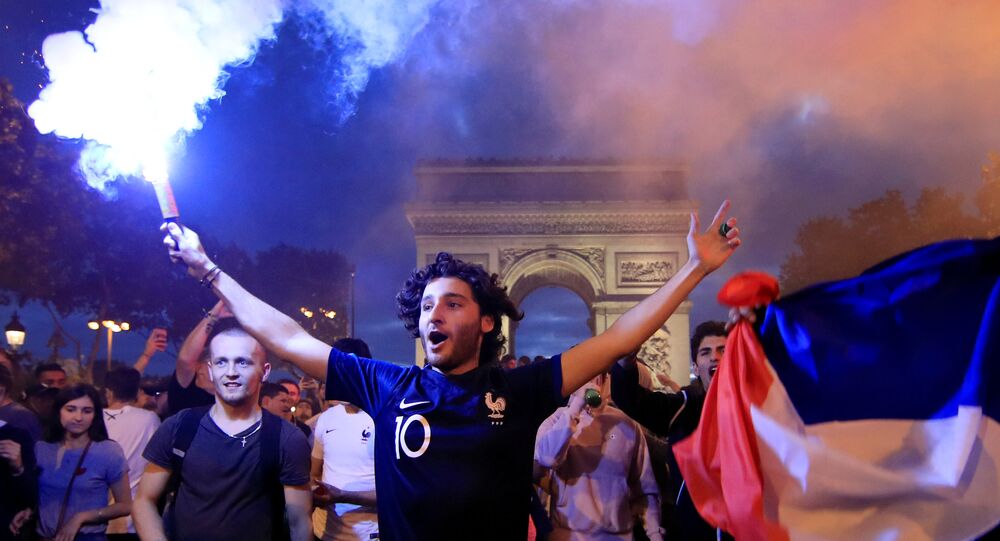 France, like many other countries, has sent thousands of ambassadors to Russia to root for the national team at the World Cup. Some fans have talked to Sputnik and shared their impressions of the country, recommending that anyone interested should see for themselves.

An overwhelming majority of those France fans who talked to Sputnik in Moscow's streets were making their first-ever visit to the capital. The World Cup gave them a unique opportunity to see things from another perspective.

"We were told that Russians would be fighting with fans all the time. It turned out that this was not true! They are normal! No, this is a good country," said Loïc who came to Russia from Nice.

"We hosted Euro 2016, but the atmosphere here is much better than in France," noted a Frenchman.

He pointed to a big number of South American fans, regretting that there were only "a few French people."

READ MORE: How England Fans Have Fun in Russia

France fans are in the minority at the ongoing World Cup. According to the French Football Federation and FIFA, Russia welcomed from 17,000 to 20,000 fans from France.

Those who made it to the host country were lavish with compliments. "We're impressed. This is a wonderful city, very beautiful, very clean. Russians are very nice," Margerie and Alain from Lille commend Moscow.

When asked about what was her biggest impression in Russia, Margerie responded, after a pause, "Cleanliness. It is much cleaner here than in France. The organization is another thing, everything is awesome."

Maxime from the town of Huez, Isère department praised Moscow's architecture. "There are many buildings here that were constructed in the past hundred years. There are more historic, older buildings in France. Those that were built in the Soviet era represent a culture that is closer to us than the French culture in general."

Maxime has already visited Red Square, had a tour of several churches and landmarks, and has been to a market.

"The atmosphere [here] will show Russia from another side, not the one displayed in the mass media. The media only talk politics, but when you come to Russia, you see the Russian people and everything else, and this is a big pleasure," Maxime said.

He also gave a thumbs-up to the security efforts during the World Cup.

"You should come and see Russia, see other cultures, and form your own opinion," he believes.

The 2018 World Cup kicked off on June 14 and will run until July 15, with the final match to be held at the Luzhniki Stadium.

Italian Gets Knocked out of Wimbledon by Williams, Strikes Fans With Doll Face

Belgian, French Fans to Take a Walk Ahead of Football Semi-Final - Consuls Gen.