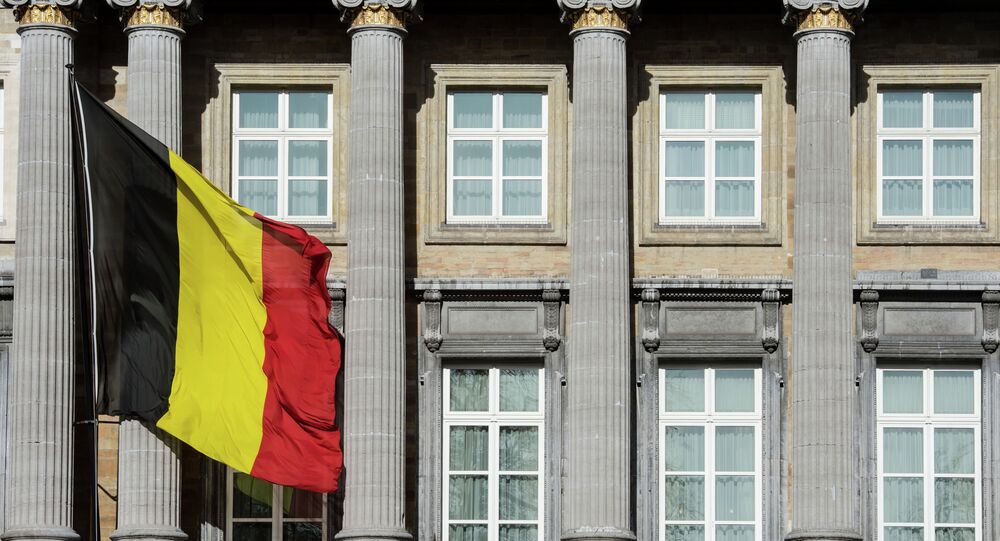 Belgium play France in St. Petersburg in the first World Cup semi-final on Tuesday night. Sputnik looks at the history of a nation which was only created as a buffer state in the wake of the Napoleonic wars.

When Belgium take on France on Tuesday, July 10, they will have on their coaching team France's former World Cup striker Thierry Henry, who became a legend at Arsenal.

Chelsea midfielder Eden Hazard, who is one of the stars of Belgium's midfield, grew up supporting France in international tournaments.

Hazard and his brother Thorgen, who is also in the squad, were born in La Louvière, a former coal mining town deep in Wallonia, the French-speaking half of Belgium.

Wallonia has also produced goalkeeper Thibault Courtois and defender Thomas Meunier but the majority of the squad are from Dutch-speaking Flanders, although the team is also sprinkled with the offspring of immigrants, such as striker Romelu Lukaku and defender Vincent Kompany.

​King Philippe and Queen Mathilde of Belgium and the country's Foreign Minister Didier Reynders will be in St Petersburg to support the team.

Eden Hazard who idolizes Zidane: "Because of the seven years I spent in France I feel 99% Belgian & 1% French, but the idea of taking French nationality never crossed my mind." pic.twitter.com/sNZMQQ7byn

Belgium came into being in 1830, when Britain and France supported an uprising in Brussels by French-speaking Walloons, who were angry at their treatment by the Dutch-speaking United Kingdom of the Netherlands, which included modern-day Belgium and Holland.

A Belgian monarchy was created with a German prince becoming Leopold I, the first King of the Belgians.

His son, Leopold II, conquered a vast area of central Africa and created the Congo Free State, which was run entirely for his own personal enrichment.

Once a Belgian, always a Belgian!
Am in heaven!
Family, friends, the sea, the stars.
So good to feel happy!
Viva Belgia!

Mercenaries brutalized the Congolese people and the appalling conditions there were finally brought to the attention of people in Europe by English journalist Edmund Dene Morel.

Public outcry forced Leopold II to agree, in 1909, to let Belgium take over his colony, creating the Belgian Congo..

But five years later Belgium was invaded by Germany at the outbreak of the First World War and the invasion triggered Britain entering the war.

During the Second World War when Belgium was occupied by the Germans and a defeated France signed an armistice with the Nazi invaders and agreed to set up a puppet regime at Vichy, the US President Franklin D. Roosevelt even suggested that after the Allies' eventual victory a larger buffer state be created, including Belgium and much of northern France.

90 kilometers from the capital lies this hidden gem, home to the saxophone and Europe’s hardest biscuits. Located at Wallonia, the French-speaking region of Belgium 🇧🇪, the city of Dinant sits at the point where the Meuse and Lesse rivers meet. pic.twitter.com/1Mr0bZgDnW

The idea never went ahead because Charles DeGaulle, the leader of the Free French, and Winston Churchill managed to persuade Roosevelt the pre-war borders should be restored.

When Belgium was liberated in 1945, Leopold III, the King of the Belgians, was restored but Belgium's single official language remained French — with the Dutch-speaking Flemish people excluded from official life.

The Belgian constitution was only translated into Dutch in 1967.

The Rise Of Flemish Nationalism

The resentment of the Dutch-speaking half of the country began to grow in the 1970s, when the right-wing Vlaams Blok (Flemish Block) party was created.

Just found out that Romelu Lukaku, in addition to being Romelu Lukaku, speaks 6 languages fluently (English, French, Flemish/Dutch, Spanish, Portuguese and a Swahili variant of Congolese). What are we all doing with our lives?

As Wallonia's coal and steel industries closed down and unemployment rose, more and more hard-working Flemish taxpayers' money was being used to subsidy hard-up Walloons.

In 2004 the Vlaams Blok were forced to close down by the Belgian Supreme Court, after being accused of being racist.

The party was reformed as the Vlaams Belang but it only has two seats in the 35-member Belgian Senate.

Tiny Minority of Belgians Want To Be French

But there are also Walloon extremists who want to break off the southern half of the country and join France.

In 1967 when President De Gaulle visited Canada and spoke out in support of the French-speaking Quebecois, he was urged to declare his support for "Free Wallonia" but he desisted.

The Rassemblement Wallonie France (RWF) — which wants Wallonia, including the cities of Liege, Charleroi and Namur, to become part of France, won only 1.37 percent of the vote for the Walloon Parliament in 2009 and only 0.43 percent of the vote in European elections that same month.

So with the extremists' dreams of tearing Belgium apart in tatters, it looks as if Belgium will exist for a few more years and the Red Devils will be appearing in plenty more World Cups.