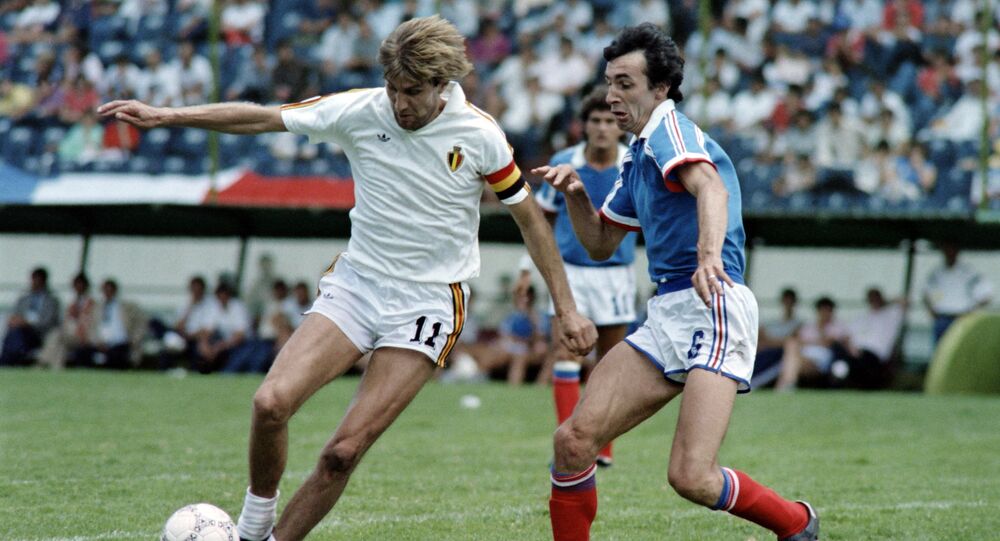 France will play Belgium and England will take on Croatia in the World Cup semi-finals on Tuesday and Wednesday nights. Sputnik looks back at the last time the four countries came so close to winning global football's biggest trophy.

England famously won the trophy, as hosts, in 1966 and France also won when they were the hosts in 1998 but Belgium and Croatia have never won the World Cup, although in the latter's case the country did not even exist prior to 1991.

Belgium's current crop of players is known as the "golden generation" and it has been more than 30 years since the country — which is divided between French-speaking Wallonia and Dutch-speaking Flanders — produced such a magnificent team.

The Belgians got off to a sluggish start in Mexico in 1986, losing the first match to the hosts, 2-1 and then drawing with Paraguay and defeating Iraq to scrape through to the Round of 16.

But they came alive in a dramatic match with the Soviet Union, winning 4-3 in extra time with a goal from Tottenham striker Nico Claesen.

They then beat Spain on penalties in the quarter final but were unlucky enough to come up against Diego Maradona's Argentina in the semi-final.

The game was goalless at half time but Maradona went up a couple of gears after the break and scored two goals without reply, the second being a classic dribble which left the Belgian defenders in sixes and sevens.

But it does not compare with the current Belgian team which has quality in every position.

“I’ve had a chaotic year. It has been really tough, to the extent that I’ve considered calling it a day. What I’m experiencing now is unreal. Quite simply, I’m over the moon.”

Italia '90 has a special place in the hearts of England fans even though it would literally end in tears.

Manager Bobby Robson — who died in 2009 — had created a decent England team in 1986 who had only been knocked out by the genius and outright cheating of Maradona.

Four years later England fans had great hopes again in Italy but the team started slowly, with draws against Ireland and Holland and a 1-0 win over Egypt.

In the Round of 16 Belgium almost took them to penalties before midfielder David Platt popped up with a winning goal in the 119th minute.

Cameroon became the first African team to reach a quarter final and with five minutes to go they were leading England 2-1. But a penalty by Gary Lineker, and another in extra time, put England through.

West Germany — who had reached the final four years earlier — were the opponents in the semi-final and they took the lead through marauding defender Andy Brehme on the hour.

In the 99th minute England's Geordie genius in midfield, Paul Gascoigne, was booked for a foul, which meant he would be suspended for the final if England made it.

As his eyes welled up Lineker was caught on camera signalling to Robson on the bench, as if to say "You need to have a word with him."

In the end though, it did not matter.

​In the shootout the machine-like Germans scored four penalties while Stuart "Psycho" Pearce had one saved and then Chris Waddle hit his over the bar.

It was all over.

Up until 1990 Croatian players played for Yugoslavia, a team which also comprised Serbs, Slovenes, Bosnians, Macedonians and Montenegrins.

Yugoslavia made it to the semi-finals of the World Cup in 1962 but were beaten 3-1 by Czechoslovakia — their only goal coming from a Croat, Dražan Jerković.

Because of political turmoil Croatia did not compete in the 1994 World Cup but when they made their first appearance on the world stage four years later, in the now famous red and white checked shirts, they made a huge impact.

The team was captained by Zvonimir Boban, who is currently Deputy Secretary General of FIFA.

Croatia beat Jamaica and Japan in the group stage and narrowly lost to Argentina.

They beat Romania in the Round of 16 and then pulled off one of world football's biggest shocks in the quarter final — thrashing Germany 3-0, with goals from Jarni, Vlaovic and Suker.

​Suker — who would win the Golden Boot — put them in front against the hosts, France, in the semi but Lilian Thuram equalized a minute later and the French defender scored the winning goal with 20 minutes to go.

Despite the defeat, Croatians were delighted because their team had gone a lot further than the team from the Former Republic of Yugoslavia, which was essentially made up of mainly Serbian players.

France famously went on to the win the 1998 World Cup final 3-0 against Brazil — the first time Les Bleus had ever won the trophy.

Four years later France crashed out of the World Cup in Japan in the group stages after an embarrassing defeat to Senegal but in 2006 the team made it to the semi-finals.

​At the 2006 World Cup in Germany, France's team contained a handful of players who had won the trophy back in 1998 — goalkeeper Fabien Barthez. defender Lilian Thuram and midfield genius and captain Zinedine Zidane.

Others had come to the fore, like Franck Ribery and a certain Thierry Henry, who is ironically now assistant manager of the Belgium team.

But, like in Russia this year, France were unimpressive in their early games. They drew 0-0 with Switzerland and 1-1 with South Korea, before overcoming tiny Togo.

They began to turn it on in the knockout stages, defeating Spain and then Brazil to make it to the semi-final.

On July 5, 2006, in Munich, they took on an impressive Portugal team — who contained impressive midfielders Luis Figo and Deco in midfield and a young Cristiano Ronaldo up front.

A single goal — a penalty by Zidane in the 33rd minute — sealed victory but France's dreams of repeating the glory of 1998 were not to be.

They lost the final on penalties to Italy and Zidane was sent off in extra time after he head-butted Marco Materazzi who had muttered an incendiary comment.

For years there was speculation about what it was the Italian said — one theory was that he had called Zidane — whose parents are from Algeria — "the son of a harki", a reference to the Arab militiamen who had been employed by the French during the Algerian war of independence and are considered traitors.

But in 2016 Materazzi finally admitted he had made a rude remark about the player's sister.