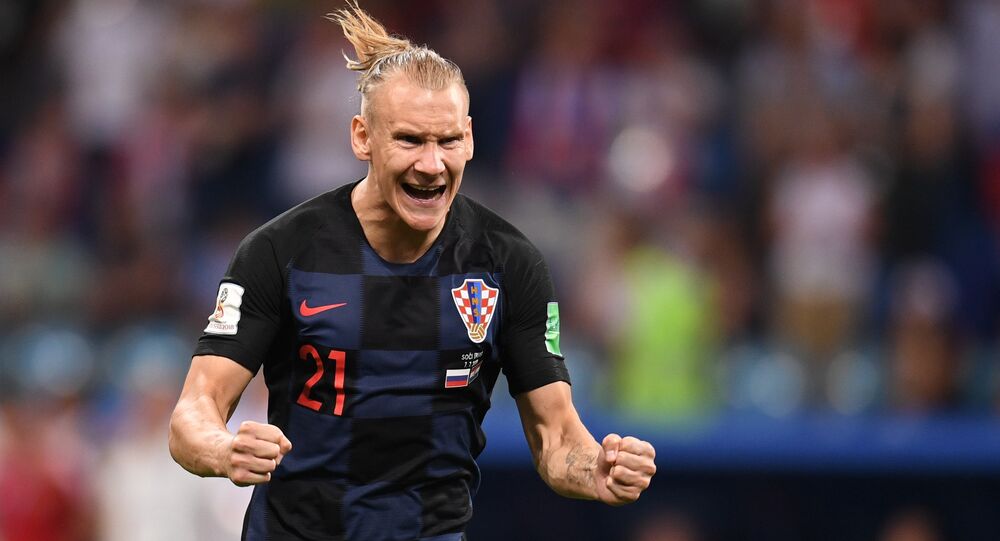 "We can confirm that FIFA's disciplinary committee has sent a warning to the player Domagoj Vida due to his video statement following the 2018 FIFA World Cup match between Russia and Croatia," FIFA was quoted as saying by the Associated Press.

© Sputnik / Ilya Pitalev
Thousands of Fans Chant 'Great Job' to Russia Players After FIFA World Cup
A video appeared on social media on Saturday night showing two ex-players of Dynamo Kiev club. Former Croatia midfielder Ognjen Vukojevic was saying "this is a victory for Dynamo [Kiev] and Ukraine", while Croatia defender Domagoj Vida was shouting 'Glory to Ukraine!', which is a famous slogan of the Ukranian far-right militants.

However, later Vida claimed he did not mean to offend anyone with his statements.

"It was definitely no political message, but a simple thank you for all the support from Ukraine, where Vukojevic and I spent a number of years. Our intention was not to offend anyone… I have many friends in Ukraine, I have a number of them in Russia — and I am proud of all of them. I'm happy to speak Russian and I enjoy Russian hospitality at the World Cup,' Vida said as quoted by the Croatian Football Federation.

"Croatian Football Federation would like to emphasize that the aforementioned messages were merely a response to numerous messages of support received from Ukraine during the 2018 FIFA World Cup, considering the deep impact Vida and Vukojević had in Ukraine when playing for powerhouse Dynamo Kyiv. Nonetheless, Croatian Football Federation has pointed out to both Vida and Vukojević, as well as all other internationals, to refrain from any messages that could be politically interpreted in the future," the statement said.

Previously, hosts Russia was defeated 4-3 on penalties by Croatia in the quarter-finals and were eliminated from the tournament, while Croatia advanced to the next round and will now take on England at Moscow's Luzhniki Stadium on Wednesday.