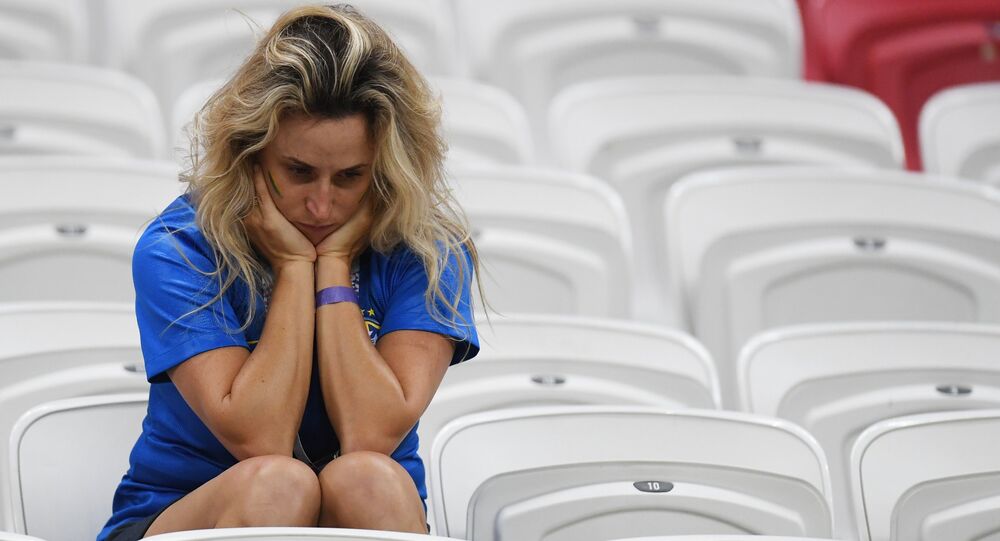 There's just a small collection of England supporters at the World Cup 2018, but of that, a mere estimated 4% are women. It’s not many at all. We've heard enough about the footballer’s wives, it’s time to talk about the football FANs wives.

Imagine all the England fans flew back from Russia on one aeroplane, and it crash landed on a desert island, with no chance of rescue. Their only option would be to repopulate the island; or walk hand in hand into extinction. The England fans would probably have to do the latter, simply because there’re just not enough ladies amongst them. In fact, throughout the duration of the Cup, I have encountered just four female England fans- and two of them were Australian! I chased some England fans down, to figure out ‘wagwan’ with all the WAGs.

Marcus, Leeds: Oh, my girls out in Miami at home — but she’s checks in on me every ten minutes — look!

Marcus scrolls down his Facebook page, and demonstrates how many of his photos his partner, Jae, has ‘liked’. It’s true, Jae is keen on his photos, and Marcus is positively beaming because of it. He offers to call her up to speak with me, so I can find out for myself what she is up to.

I thought his opener was a little dodgy: ‘Hey Jae, I’m here with a girl who wants to know if I have a girlfriend…’ but nevertheless, Jae was happy to speak, a true sign of a trusting relationship.

Jae Heller, Miami: I’m at home. I couldn’t really come out because I am in the middle of taking a PHD in Education, and I have a huge amount of work and studying to do. Also, Marcus didn’t actually invite me, so…

When quizzed on that, Marcus admits that Jae was not invited on his World Cup excursion. He’s pretty adamant that it’s a man’s sort of trip. “I’m with two guys from Leeds, and the others I met here. With a woman it’s a bit different.” Marcus insists that he doesn’t do anything ‘naughty’, and that the trust in their relationship is implicit- it’s a sentiment that Jae agrees with.

Jae Heller, Miami: Of course, I trust him, and I am excited to see him again. Absence makes the heart grow fonder. I’m particularly excited for the presents he brings me!

Listening over my shoulder, Marcus nods. He later explains how his holiday comes at a price. Jae wants diamonds- earrings and a necklace. ‘In the end it works out cheaper than hotels and flights for the two of us- but mind you, if England get to the final then she’s coming out for sure!”.

Lee Hardy is from Birmingham in the UK. He works as the managing director of an electro-contracting firm and uses the World Cup as a chance to ‘relax’ and ‘unwind’. Back in Birmingham, he’s left behind his wife, Tamara, and his two kids. Just like Jae, Tamara was not invited to the World Cup- but even if England get to the final, Tamara’s coming out to join the festivities.

Lee Hardy: I would never bring a woman to the football, that is just fate worse than death! This is how men relax. I do nice things with my wife, like going to the spa and things like that, and I do football with the men and that’s just how it is!

That’s not how it is for all the fan-sets. In fact, the South American female demographic is hugely well-represented at this year’s World Cup tournament. If we were to take the former fictional scenario and apply it to the Colombian fans: (Plane, desert island, repopulate/ extinction), they’d have no problem building a fruitful community. They’ve travelled out to the Cup in groups: Families, children, husbands, wives, girlfriends, young and old, and they’re having a joyous time- So why aren’t England doing the same? I asked Lee, if he’d noticed how South America doesn’t seem to have an issue with women and football. Lee had noticed and thinks it’s ‘a bit weird innit.’

For the families that have come to Russia to the World Cup together, it’s not weird at all. ‘I would never have stayed at home! This is our holiday, we only have one every few years, so we all go together of course.’ Sara Lopez, is from Colombia. She’s here with her two young boys and her husband, Abraham. For them, it is strange to hear that the majority of England fans haven’t come out to Russia with their ‘WAGs’.

Sara Lopez: Football is fun for everyone, and it is not just about the football anyway, we are seeing a new country, and travelling all around. It’s great to experience it together before the boys get too old to want to come on holiday!

© REUTERS / Lee Smith
England WAG Ahead of Colombia Match: Sex Doesn't Hinder Performance
As well as a slight cultural difference, Lee Hardy thinks there might be something to do with the politics of our nations. He is keen to note that for many of the brits, if they were to bring their families to the World Cup, Russia wouldn’t have been the one to do so.

Lee Hardy: My wife is a bit worried about Russia, and how violent it would be. The British government spent two years telling us not to go, so it’s not the place you want to take your kids! Of course, it’s all been fantastic so her minds at ease now, we all know it’s going be fine. I still don’t think she’ll come to the next one though!