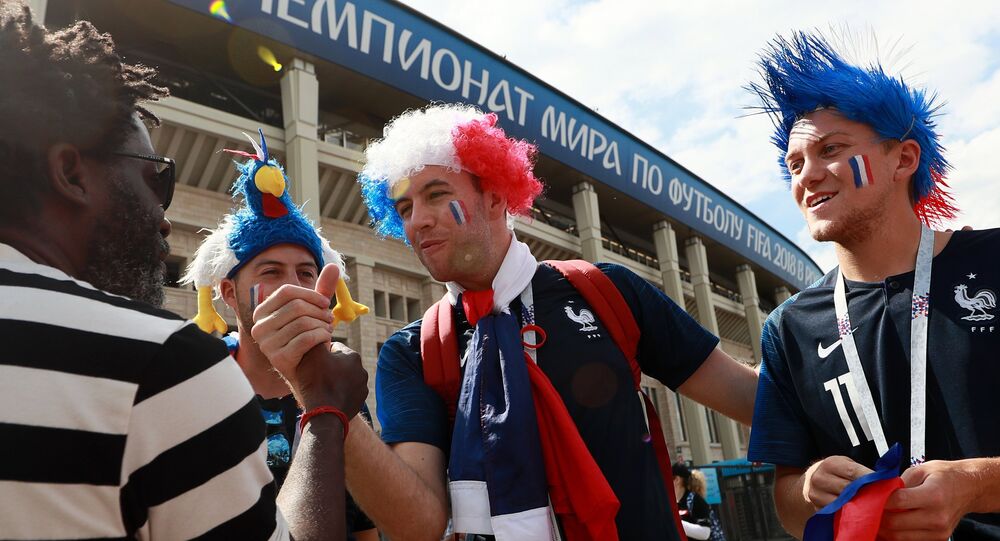 NIZHNY NOVGOROD (Sputnik) - The 2018 FIFA World Cup in Russia has had a positive influence on the image of the host nation abroad, Minister-Counsellor of the French Embassy in Russia Paul-Bertrand Barets said on Saturday.

"Such event as the World Cup has had a positive impact on changing the way foreigners see Russia, on changing the image of the country in a positive way. We know that prejudices exist everywhere and at all times and it's not in our power to change that. But such event as the World Cup, that supports certain sporting values and promotes mutual respect, is very important for improving Russia's image abroad," Barets said.

The French diplomat went on saying that he had been analyzing comments from his compatriots who had already visited such host cities as Moscow, Kazan, Yekaterinburg and Nizhny Novgorod and were planning to visit St. Petersburg.

"I can note that their view of Russia has changed in a positive way. We can also come across lots of positive reviews and comments in the French media," Barets stated.

The Minister-Counsellor noted that French representatives had been very satisfied with the security measures provided in the host country during World Cup.

"We have worked a lot with the Russian side regarding the security and we are satisfied with the results. Our [French] security attache worked [with the Russian side] during the whole of the preparation period for the World cup and during the tournament itself. Moreover, we set up a special team, who is helping our compatriots traveling across Russia during the World Cup and as of now we've had no problems, everything goes as planned, Barets said.

© Sputnik / Maxim Bogodvid
Mbappe or Neymar? France-Uruguay Game Divides Twitter Over Who Deserves Oscar
He added that Russia managed to organize the tournament perfectly and he was happy that football values are respected and the hosts are tolerant towards the representatives of all participating countries.

After beating Uruguay 2-0 on Friday in the quarter-final, France will play Belgium in the last four for the first time since the 2006 FIFA World Cup.

The 2018 FIFA World Cup kicked off on June 14 and will continue until July 15, with the final set to be held at the Luzhniki Stadium.