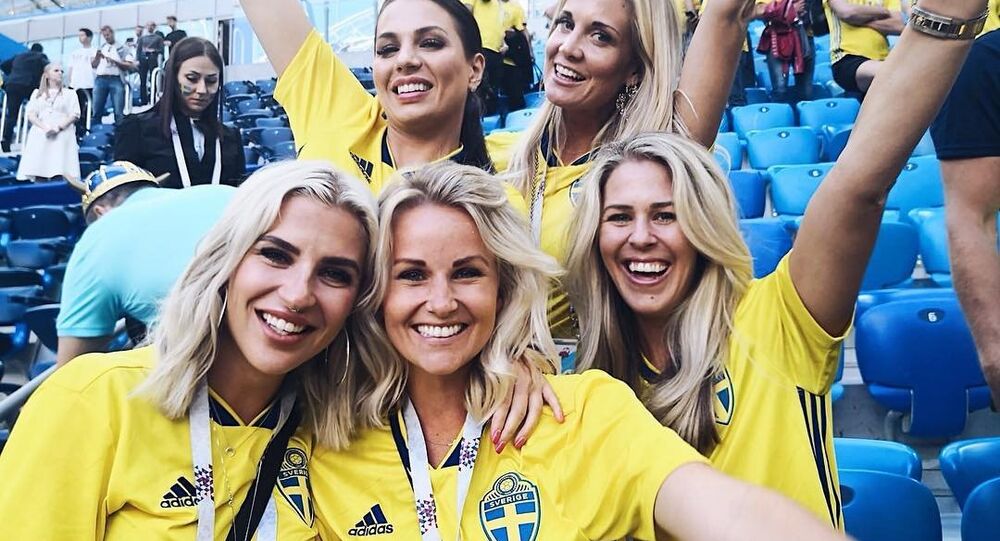 As Swedish footballers are readying for the historic World Cup quarter-finals with England on July 7, the players’ wives and girlfriends are posting cheery snaps to support their loved ones.

Sweden recently beat Switzerland 1-0, having reached their first World Cup quarter-finals since 1994, and the Scandinavian beauties have been supporting their husbands and boyfriends all the way. Here are some of the stunning Swedish WAGs:

Camilla Sjodahl-Essen, who’s been dating midfielder Albin Ekdal for over 10 years and is now expecting their first child, is one of the WAGs to have traveled to Russia for the championship.

More than 10 years together and obviously still going strong❤️❤️❤️❤️❤️💍💍

Camilla’s been supportive of Ekdal, posting pictures of her wearing Team Sweden’s jersey before switching the game.

After Sweden’s second match against Germany, she wrote she had “goosebumps and teary eyes” while watching her man play.

The girlfriend of goalkeeper Robin Olsen, Mia Lindgren, prefers to keep a low profile, but has been quite active on her Instagram.

Mia wrote that while she couldn’t be there next to him, she was very “proud” of her man, and uploaded a series of snaps with her kids ahead of the games, sending love and support from Sweden.

The wife of Sweden’s captain Andreas Granqvist, Sofie, is now waiting at home for her husband, who she calls her “king”, as she has just given birth to their second child.

She’s been sharing tons of pics of her life “as a mom & a wife of a footballer.”

🇸🇪 I am so proud to be your wife hubby. 🇸🇪 #viärsverige #hejasverige #nutarvimexico #sweden #vm2018

They see me rollin’ 🚘

Swedish social media “influencer” Josefin Lustig traveled to Russia to support her husband center back Mikael Lustig, and has even been filming a vlog about the World Cup.

Sneak peek of the vlog! Don’t miss the whole video on the blog. So much happiness in this video! So happy that I capture this, memories to keep forever! 💛💙

A new vlog is up from this trip to Russia! Go check it out on the blog 💙💛🇸🇪

Judging by her Instagram, she’s been pretty excited to visit the tournament’s host country and has enthusiastically been cheering on her man, wearing T-shirt in team colors.

I’m so excited to go back to Russia on Tuesday! No kids this time 🥂🇸🇪

The two married last year and have two daughters together.

The 24-year-old Maja Nilsson, who works in marketing, married defender Victor Lindelöf last month after the couple got engaged in the Maldives. She shared the pictures of the ceremony on Instagram, where she’s followed by over 116,000 people.

Right after we officially became husband and wife!!!! ❤️

The beautiful blonde has accompanied her man to Russia and has been watching the games from the stadiums – it seems that she’s enjoying her time at the World Cup.

MY ONE AND ONLY ❤️ vi ses i KVARTEN älskling

After three hours we finally made it to CAMP SWEDEN 🇸🇪

Guidetti and Dahlstrom have two kids together, and are planning to marry soon:

Swedish forward Marcus Berg’s wife Josefine Ringblom, who can boast of 22.5k followers on Instagram, is also among the WAGs, who have arrived in Russia to support their soulmates.

Life right now! Qualitytime through the glass when all I want to do is to hold you in my arms! But it's QUARTERFINALS BABY! Amazing amazing amazing! Goosebumps! Älskar dig 💕 #TeamBerg

The couple is raising three kids together, Jolie, Leonel and Mateo:

Sweden is set to take on England on July 7 in the city of Samara.