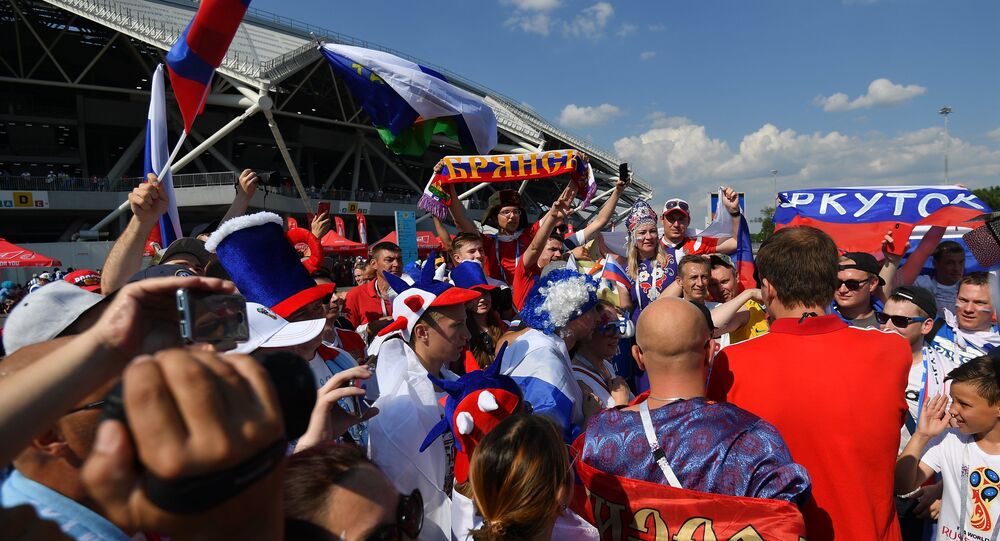 With the FIFA World Cup 2018 hosted by Russia just about to enter its last phase, the tournament has already started attracting praise and appreciation for its errorless conduct and organizing perfectness.

New Delhi (Sputnik) — Former captain of the Indian football team and considered one of the most legendary soccer players in the whole of South Asia, IM Vijayan in an exclusive interview with Sputnik appreciated "the warmth of the hosts who went out of their way to make the guests feel comfortable and at home."

#WorldCup in the Round of 16, Spartak Stadium and Rostov Arena.

"I think it is one of the most well-organized events in recent football history. We had many people visiting Russia to watch the event and they all have called back their experience saying that the people were courteous and they did their best to make the visitors comfortable," Vijayan told Sputnik.

© Sputnik / Ilya Pitalev
Qatar Mulling Adoption of Russia's FIFA World Cup FAN IDs
Some of the guests have returned with sweet memories and while some like me are now going to Russia to watch the semi-finals live, he added.

Vijayan is especially excited about the kind of team departures the knockout round has seen.

"The qualifying round has been very interesting and I must say everyone played their best in team spirit without any problems. The matches we conducted in the best of the spirit of sport and the reports I read in the media are conclusive to state that the organizers did their best," he adds.

© Sputnik
Real Russia VS Myths: US Volunteer’s Impressions of 2018 FIFA World Cup
IM Vijayan known for his extraordinary volleys, lighting fast pace and swift movement on the pitch, is one of the most successful players to have represented India on the international circuit. He made his debut for the national team in 1989 and represented the team at various international tournaments such as the Nehru Cup, World Cup qualifyers, SAFF (South Asian Football Federation) Cup and SAF Games.

The former Indian striker is leaving for Russia this weekend to witness the World Cup semifinals with a hope that India will be playing in the FIFA World Cup soon.

"I am hopeful, the future looks very bright," he told Sputnik.