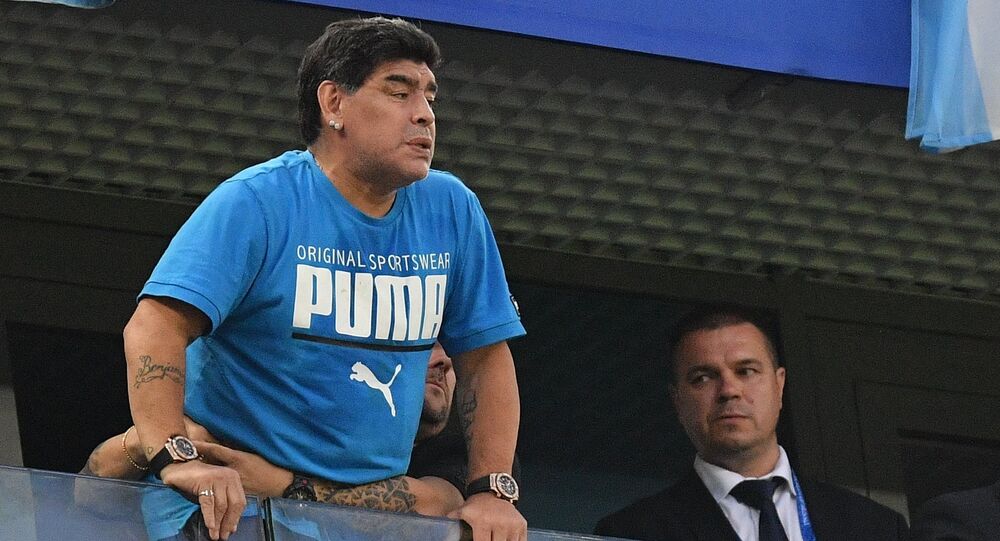 FIFA earlier stated that Diego Maradona’s criticism of American referee Mark Geiger’s performance during the England vs Colombia game in the World Cup round of 16 on Tuesday was “entirely inappropriate and completely unfounded.”

In light of FIFA’s “strong rebuke” of the Argentine football legend’s “insinuations,” Maradona took to Instagram to apologize to the world football organization for his previous remarks. Suggesting that he was too excited in rooting for Colombia, he "said a couple of things” and admitted that “some of them are unacceptable."

“My apologies to FIFA and its president: as much as I may sometimes have opinions contrary to some arbitration decisions, I have absolute respect for the work – not easy – that the institution and the referees do,” he wrote.

His apology comes shortly after FIFA issued a statement condemning his remarks on referee Mark Geiger’s performance during the Colombia vs England match on Tuesday.

“FIFA considers the additional comments and insinuations made as being entirely inappropriate and completely unfounded. At a time when FIFA is doing everything within its power to ensure principles of fair play, integrity and respect are at the forefront of this World Cup and how the organization is now run, FIFA is extremely sorry to read such declarations from a player who has written the history of our game,” the statement read.

“I saw a monumental theft. I apologize to all the Colombian people, but they must know the players are not to blame. […] A man like [Geiger] should not be put in charge of a game of that magnitude,” he told Venezuelan broadcaster Telesur.

He further questioned Geiger’s appointment as a referee for the game and lashed out at the chairman of the referees’ committee, Pierluigi Collina, insisting that he apologize.

“The referees are chosen by Collina, who was appointed by Infantino [Gianni Infantino, the president of FIFA] to change the new FIFA from thieves and fixers, and today we saw the opposite — an old and fixed FIFA,” he elaborated.

Maradona then claimed that Geiger knew more about baseball than football:

“The referee will know a lot about baseball, but he has no idea about football. The Colombian players asked for VAR [Video Assistant Referee] and he did not give it to them. Twice the English threw themselves to the ground and he did not admonish them. This was theft,” the Argentine star concluded.

© REUTERS / Matthew Childs
'Not a Crack Player': Maradona Takes Shot at Spain's Ramos Ahead of Russia Match
Colombia lost 4-3 in a penalty shootout in a game that saw them given six of the match’s eight yellow cards and whistled for 23 fouls compared to England’s thirteen.

Geiger also awarded a penalty to England’s squad after Colombian midfielder Carlos Sanchez was determined to have pulled down striker Harry Kane.

Maradona, who famously led Argentina to victory at the 1986 World Cup, has already hit headlines for his bizarre conduct during the championship in Russia.

Watching the games from the VIP section, he couldn’t contain his emotions as he cheered for Argentina – he even flipped his middle fingers during the match against Nigeria.