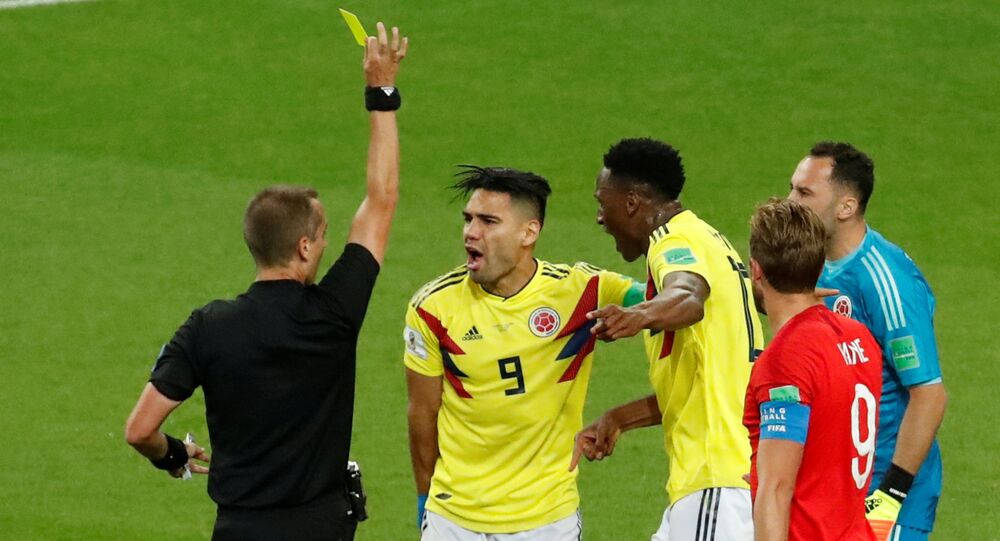 As Colombia is grieving over Tuesday's World Cup penalty shootout loss to England, Monaco striker Radamel Falcao and Argentina legend Diego Maradona suggested their versions of why the team was knocked out of the World Cup, and are blaming the referee.

Standing in front of the reporters after Tuesday's defeat by England on penalties in the best of 16 round, Colombia captain Radamel Falcao criticized American referee Mark Geiger for what he called a bias towards England.

READ MORE: England Knocks Out Colombia in FIFA World Cup Round of 16 in Penalty Shootout

"I found it peculiar that they put an American referee in this instance," Falcao said, as quoted by ESPN.

"To tell you the truth, the process leaves a lot of doubts. He only spoke English, some bias was certain." The striker went on to say that the referee was favoring England in the 50-50 plays.

Speaking to Venezuelan TV channel teleSUR, he said: "I saw a monumental theft on the pitch. I apologize to all the Colombian people, but the players are not to blame as we don't choose the referees."

"The referees are chosen by [Pierluigi] Collina, who was appointed by Infantino to change the new FIFA from thieves and fixers, and today we saw the opposite — an old and fixed FIFA."

Colombia conceded 23 fouls in Tuesday's tense clash, compared to England's thirteen. The Latin American squad was shown six out of the eight yellow cards. Geiger also awarded the Three Lions a spot kick after Harry Kane was pulled down in the box.

England will face Sweden in Samara on Saturday for a place in the semi-finals.