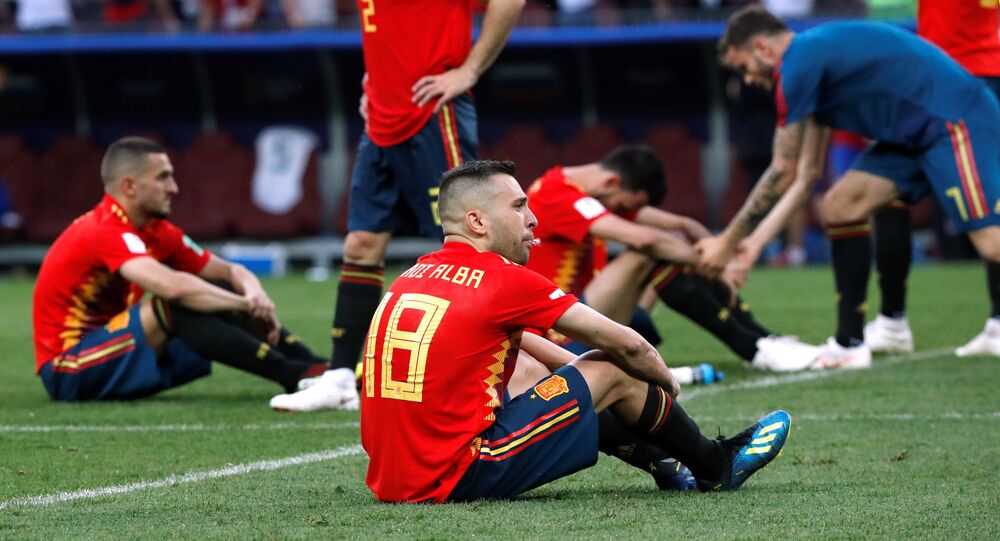 With Spain now out of the World Cup after being beaten in a climatic penalty shootout by Russia, Sputnik takes a closer look at the shortcomings of the Spanish national football team in its 2018 World Cup campaign.

Despite dominating possession in Sunday’s last 16 match against Russia, Spain only managed to create a handful of serious attacking opportunities in over 120 minutes, resulting in a spectacle which lacked the tempo of some of the previous knockout games, but was nonetheless gripping and suspenseful.

© Sputnik / Vladimir Pesnya
Fans Watch Russia-Spain Round of 16 Game (VIDEO)
Although Spain’s inability to create chances can largely be attributed to the robust, organized and well-disciplined Russia side, there was little sense of urgency from Spain as the game progressed, with the squad and the team’s coaches seemingly confident that a goal would come along at some point, or certain that they’d comfortably beat Russia on penalties.

Even their early goal – which came to fruition as a result of a wide freekick – found its way into the goal as a result of a lucky deflection off a Russian defender, not Spanish attacking spirit or intent.

Although they scored a number of exceptional goals in the group stage, they only managed to narrowly progress into the last 16, after achieving a single victory against Iran, and two draws.

Spanish defender Gerard Pique made a couple of critical mistakes and judgement calls in Spain’s brief 2018 World Cup campaign, costing his team points by needlessly conceding a late freekick to Portugal in their opening game, paving the wave for Cristiano Ronaldo to score an equalizer.

A few weeks later, the Barcelona center-back gave Russia an opportunity to get level with Spain by deliberately blocking the ball’s path to the goal with his hand in the 18-yard box, giving away a penalty, which was calmly struck by Artem Dzyuba.

Spanish goalkeeper David de Gea – who also serves as Manchester United’s first choice goalkeeper and is regarded as one of the best in the world – was unable to make a single save in the penalty shootout against Russia, while his Russian counterpart Igor Akinfeev made two key saves.

© Sputnik / Grigory Sokolov
Twitter in Awe After Subašić, Schmeichel Penalty Shooutout Play in Croatia vs Denmark World Cup Match
Both keepers in the Croatia vs Denmark penalty shootout on Sunday evening also made several saves to keep their teams in contention, though Croatia emerged victorious.

Over the course of four matches in the 2018 World Cup, de Gea failed to stop any of the six penalties taken against him.

Even outside of penalties, de Gea looked nervous and unsettled. This was most evident in Spain’s opening game, when an error by de Gea during what should have been a routine save against Ronaldo cheaply gave away a goal.

Russia will play Croatia in a quarter final showdown on July 7 at the Fishy Olympic Stadium in the Black Sea city of Sochi. The Russian national football team is just three match wins away from lifting the trophy, but this will be no easy task as the competition continues to intensify.