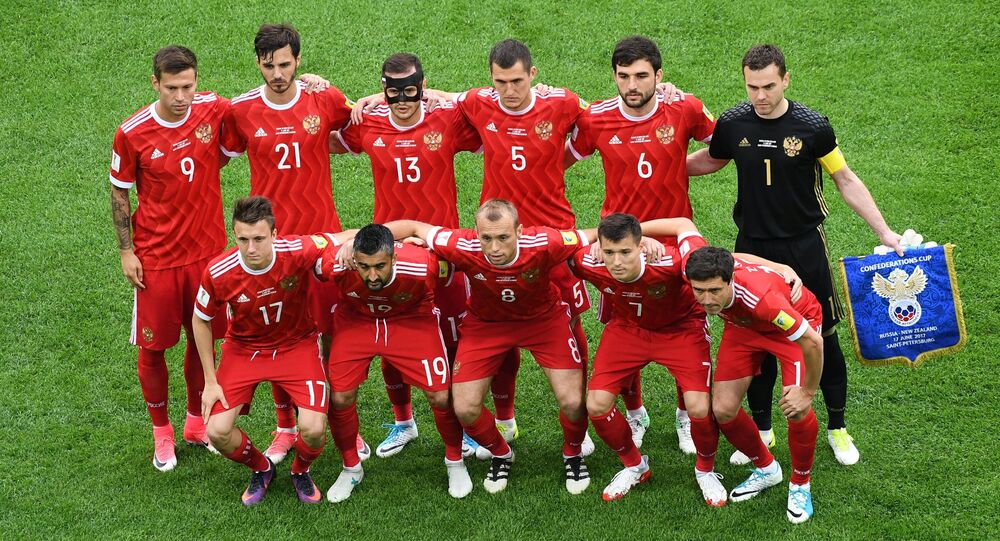 MOSCOW (Sputnik) - Former Russia head coach Anatoly Byshovets told Sputnik that France and Argentina had equal chances to win their FIFA World Cup round of 16 match, and the teams' ability to take their chances would become the decisive factor in their success.

The Russian national team has a chance to win the round 16 match of the FIFA World Cup against Spain because the players prepare for the game with the right attitude and understand that they have to do their absolute best, former Russia head coach Anatoly Byshovets told Sputnik on Saturday.

"I may be one of those who does not share the opinion that we have no chances. Football proves them wrong, and we've already seen that teams that are inferior in a number of characteristics achieve good results… It seems to me that our players do have the right attitude for the match and the understanding that it is necessary to play at the limit of their strength… That's why there is hope," Byshovets said.

© REUTERS / Kai Pfaffenbach
Russia's Team 'Not Afraid' of World Cup Round of 16 Rivals Spain - Midfielder
He added that Russia had to be ready to play in defense most of the match as Spain would have possession for around 75 percent of the time.

He added that France's main players did not play in the team's final group-stage match against Denmark, which will give France an advantage over the Argentinian side from the physical point of view.

Russia head coach Stanislav Cherchesov said on Saturday, that circumstances have made his team change and adjust accordingly during the FIFA World Cup.

"We adjusted not because we wanted to, but because circumstances forced us to. We lost three of our core players and had to adjust to that. We have played in the tournament with these changes and achieved some success. As for Spain, they changed the head coach, I don't exactly know what was the reason. We see that they changed their game as well in some sense," Cherchesov told journalists.

The last time Russia played the 2010 World Cup winners Spain, was in a friendly in November 2017 where they held their opponents to a 3-3 draw.

"Clearly we have examined our opponent. We see tactical nuances that should bring us certain success. Before the World Cup, they would concede one goal [per game], now that has clearly changed. But my colleague [Spain head coach Fernando Hierro] knows that as well, he draws his own conclusions," Cherchesov said at the pre-match press conference.

Cherchesov added that last year's friendly with Spain and the upcoming match are "two completely different things," and that his team will have "only one shot" at this game.

Former Russia striker Dmitri Kirichenko told Sputnik on Saturday that as strong as Spain were, they "are not perfect," and Russia would have goalscoring opportunities in the upcoming FIFA World Cup round of 16 match if they used swift counter-attacks.

"I did not have a chance to watch them play Morocco, but Spain looked strong playing against Portugal and Iran. Spain forces the opponent to go into defense. But even they are not perfect, they have problems in defense. That's why we'll have our chances… Quick counter attacks will be the most effective weapon," Kirichenko said.

He went on saying that Spain forward Diego Costa, who had scored three goals during the group stage, was "very dangerous" and Russia defenders would have to keep an eye on him.

Speaking about the upcoming match, former Spain midfielder Albert Riera told Sputnik on Saturday that Spain were yet to find their best form at this year's FIFA World Cup, but the team was dangerous.

"Yes, Spain are yet to show their best form at the tournament, but they are still Spain, they control the ball perfectly, up to 70 percent of the match, and that reduces Russia's chance of success," Riera said.

However, he added that Spain had already conceded five goals in their three matches during the group stage, meaning that Russia should be able to create goalscoring opportunities.

"It [the goals conceded by Spain] shows that your national team will also create chances in the attack, but only one team will advance [to the quarter-final]. But if someone is to knock out our team from the tournament, I'd rather this team was Russia," Riera said.

Spain Must Minimize Mistakes in Game With Russia – Head Coach

Spain must be careful and try to minimize their mistakes in their upcoming round of 16 match with Russia, head coach Fernando Hierro said on Saturday.

"We have a tactical plan, a very clear one. We know what Russia and Spain can do. One cannot avoid mistakes in football, but we need to minimize them. We need to act appropriately, wisely and analyze [the situation]. We have done a lot already, and our task for the game is clear," Hierro said at the pre-match press conference.

Last time Russia played 2010 World Cup winners Spain in a friendly in November 2017 drawing with the Spanish side 3-3.

© Photo : Alexei Danichev
Russia Holds Full-Squad Training Session Ahead of Spain Match (VIDEO)
The round of 16 match between Russia and Spain will take place at Moscow's Luzhniki stadium on Sunday with the kick-off scheduled for 17:00 Moscow time [14:00 GMT].