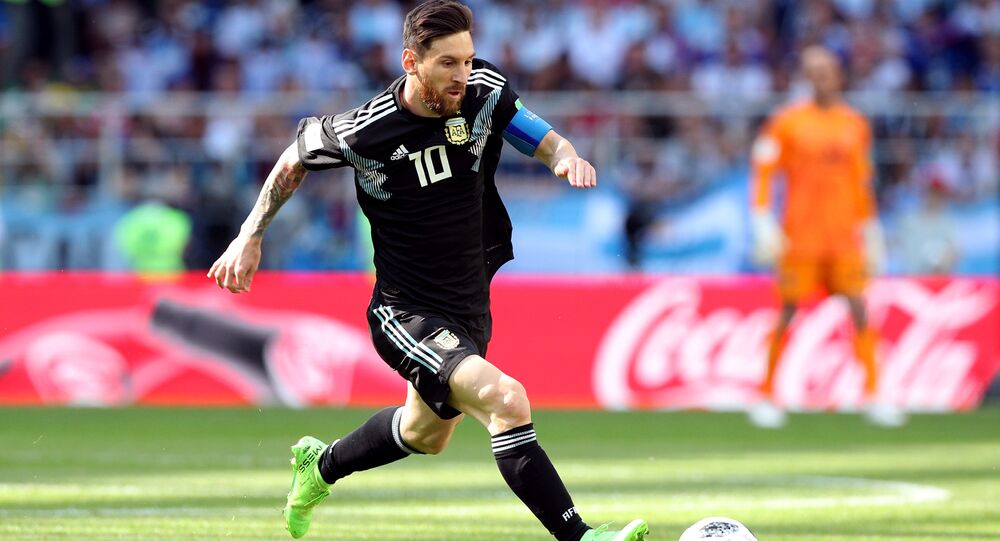 'A True Genius': Argentine Football Coach Instructs Team to Be on Messi's Level

Temperatures are rising as Argentina prepares to face France in a World Cup round of 16 game on Saturday. Coach Jorge Sampaoli has called on Argentina to raise their game to the level of "genius" Lionel Messi.

Sampaoli has told his teammates to give "the best player on earth" as much help as possible.

"Leo has such clear vision when it comes to football that he allows us to see things that, sometimes, only a true genius sees," said Sampaoli.

"It's often difficult to be at the level of such a great player. He's a shining light for us all, and we have to do our very best to all try to be at his level,” he added.

© Sputnik / Anton Denisov
Kazan Meets Messi With His Graffiti Portrait (VIDEO)
It is known that so far, Messi has not been able to shine as much as he and his fans would have liked him to, as he missed a penalty against Iceland in a shocking draw.

In the subsequent match against Nigeria, Messi managed to make a sort of a comeback when he scored a volley; however, he is still quite far behind football stars such as Cristiano Ronaldo and Harry Kane, who have scored four and five goals respectively during the World Cup.

As Argentina now prepares to face France, Sampaoli has given last minute advice to his team, stressing the danger of allowing France to dictate the game.

The coach said that the French team is known for being fast and to have solid passing.

"They will try to make us make mistakes, and try to hurt us on the wings. If Dembele and Mbappe play, they will be very fast for sure. The key, for both teams, will be the actual game of passing and football,” the coach said.

He added that Argentina will play an aggressive style of football, planning to attack from the kick-off.

"Accepting defeat would be very difficult for us,” Sampaoli said.

© AP Photo / Ricardo Mazalan
Head Coach Sampaoli Undecided on Argentina’s Starting Lineup for France Game
Earlier, during Argentina’s last match, some media interpreted Sampaoli’s talk with Messi as authoritative consulting. However, the coach said that he was actually informing the football star about a possible strategy.

The 58-year-old coach, speaking on the eve of Saturday's game with France at the Kazan Arena, said that the incident had been misinterpreted.

"I remember that point in time but everything I say to my players is personal and I will not divulge what was said," he told a news conference.

"But it's not how you characterized it, we had several options in attack and I was just communicating to him that we’d be using one of the strategies that we'd rehearsed,” the coach said.

He was full of praise for Messi, calling him “a genius” and the “best player in the world.”