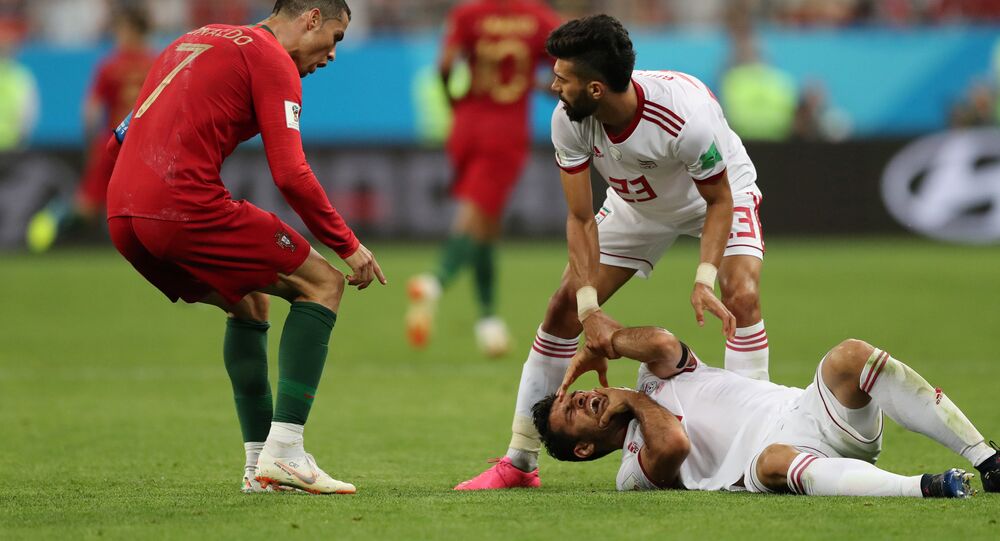 The Portugal-Iran match at the 2018 FIFA World Cup saw a controversial decision by the game's referee who gave Cristiano Ronaldo a yellow card for his off-the-ball elbow on an Iranian rival.

Iran coach Carlos Queiroz has lashed out at FIFA after his team's elimination from the 2018 World Cup, insisting that Cristiano Ronaldo should have been sent off due to his off-the-ball elbow against Morteza Pouraliganji during the Portugal-Iran match, which ended in a 1-1 draw.

Speaking to reporters after the game, Queiroz lamented the decision by referee Enrique Caceres who refrained from giving a red car to Ronaldo even after using the VAR (video assistant referee) system.

"The reality is you stop the game for VAR and there is an elbow. An elbow is a red card in the rules. The rules don't say if it is Messi or Ronaldo," Queiroz emphasized.

He added that the question is not about the referees and that it pertains to "the attitude and the bravery and the character."

Iran is the best team in group B, so much heart in their play, they were robbed of a penalty and Ronaldo should have been redcarded for that elbow. #IRNPOR #Worldcup

"The decisions must be clear for everybody, for the people. In my opinion, [President FIFA] Mr. Infantino and FIFA, VAR is not going well. That is the reality," Queiroz noted.

He called for the truth to be respected and urged FIFA to pay attention to "who is refereeing the games."

The referee in Iran-Portugal is incompetent. No penalty kick given to Iran on legit penalties, and then no red card (only a yellow) to Ronaldo for whacking an Iranian player in the face with his elbow well away from the ball.

"If you implement VAR then to make mistakes is not human. To make mistakes is when a man alone on the pitch could not see something. We accept that. But when you have high-technology, training, thousands of dollars spent on one system and five guys sitting upstairs and they don't see an elbow. "It's a yellow card? Give me a break," he said.

© REUTERS / Carl Recine
Russian Space Agency Turns Ronaldo Into Star Lord as His "Space Shot" Goes Viral
Queiroz concluded by saying that it was Iran which should have made it to the Round of 16 and that his team "deserved to win the game" with Portugal.

Ronaldo's teammates will face Uruguay in Sochi on Saturday, while Iran has been knocked out of the tournament.

'Ronaldo's Scored 4 Goals in World Cup - Opposite to Neymar' - Blogger

'Wish I was Like Him': Spain's Costa Reveals His Man-Crush on Cristiano Ronaldo