Previously, Nigeria lost 2-0 to Croatia in their opening Group D game, while Iceland held Argentina to a 1-1 draw in their first match. Iceland to play against Nigeria in Volgograd on Friday, at 6:00 p.m. Moscow time (3:00 p.m. GMT) with the temperatures exceeding 86 degrees Fahrenheit (30 degrees Celsius) in the city.

Iceland starts Bodvarsson & Gislason instead of Hallfredsson & Gudmundsson, switching to 4-4-2.

Previously, Iceland head coach Heimir Hallgrimsson said Thursday that Nigeria would be more suited to playing in the hot weather conditions in the southern Russian Volgograd than his team.

Listening to Iceland vs Nigeria. I don’t think there’s anything cooler than hearing the Viking clap take over a stadium. pic.twitter.com/zl1YzCI6Jl

After 45 minutes, neither team has managed to break the match open, the score is 0-0 as both teams head for the half-time.

After the break, the game escalates swiftly and at 49' minute Nigerian player Ahmed Musa opens the score. Nigeria leads 1-0.

What a goal! Nigeria breaks free after an Iceland long throw. Moses receives a mini through ball then squares it to Musa. His first touch sets up an heavenly volley. The rest is Iceland's nightmare! pic.twitter.com/bxdqiAGI8T

At 75' minute Ahmed Musa evades Icelander goalkeeper and bags a brace, making the score 2-0 for Nigeria.

Iceland had an opportunity to take it out after a foul at 81' minute, but Gylfi Sigurdsson fails to score a goal.

The game ended after 6 additional minutes, Nigerian team is victorious.

According to the statistics a total of 40,904 fans attended the FIFA World Cup match between Nigeria and Iceland in Volgograd. 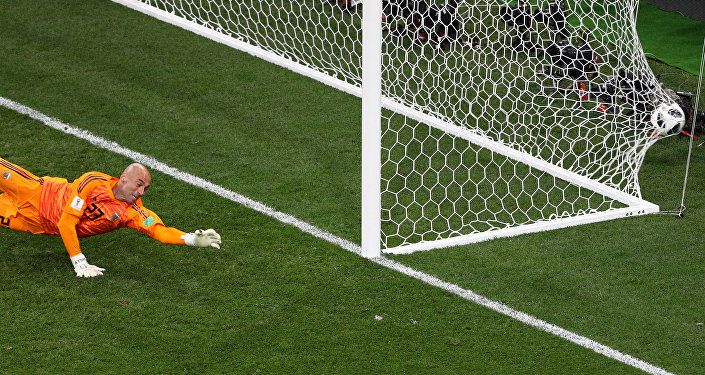 © Sputnik / Рамиль Ситдиков
Croatia Overwhelms Argentina 3-0 in a Key Group Game at FIFA World Cup
At the moment Croatia secured the first place in the group D with 6 points after the victories over Nigeria and Argentina. The Latin American team has only 1 point after two games, while Nigerian players — 3 and Iceland — 1. The situation in the group became unpredictable. Despite the fact that Croatia secured its place in play-offs, Argentina, Nigeria and Iceland all have a chance to advance as well, while the Nigerian team even has a possibility to end up at the first place in the group.

On Tuesday Nigeria will  play with Argentina, while Iceland will be taking its chances against Croatian players.