Watch World Cup With Fans of All 32 Nations? Challenge Accepted by 4 Londoners

Four Londoners who are on a mission to watch a World Cup match with a fan from every nation without leaving the British capital spoke to Sputnik about their footballing adventure.

Football lovers Adam Burns, Kevin Masters, Paco Lopez and Rasmus Otto have launched Watching with the World (WWTW) project, documenting their journey with video and photography of each fan they meet.

The first game they watched was the opening match of the tournament — Russia vs Saudi Arabia.

"We enjoyed the game, 5:0, with Russian fans and we think we can do it with every nation. We have half the teams covered so far. We have struggled to get hold of Saudi Arabia fans and we are appealing to them to reach out to us," Adam Burns told Sputnik.

Meet Oleg and Anton, two Russian fans from London. When Golovin’s free kick hit the back of the net in the 94th minute, these two went ruddy mental!! Who can blame them, strong start from the hosts. Check out the reaction in our IG story from day one.

Thirty-two nations are represented in the World Cup championship and while it might not be an easy task to join each fan group during games, the WWTW quartet have already managed to join fans from Egypt, Iran, Portugal, Australia, Iceland, Nigeria, Costa Rica, Brazil, South Korea, Panama and Tunisia.

Looks like it’s going to be No Salah today, but the Egyptians on Edgware Road will be happy with this point. Omar and his Dad are still smiling, nothing better than watching the World Cup with your Dad. #WorldCup2018 #WatchingWithTheWorld #EGYURU pic.twitter.com/IvC7JbVO74

Game 3 was brilliant, a few beers in the sun, a shisha and a late goal with our Iranian mates, Ali, Mow and Pedram. #WorldCup2018 pic.twitter.com/c5pRyhsdjN

Ronaldo’s fan club in Little Portugal, #London. This World Cup is off to a flyer!! #worldcup #WatchingWithTheWorld pic.twitter.com/hxXLMkf0t4

London was red, white and blue earlier. The Costa Rican fans in the @EditorsTap we’re in full voice right until the end! #CostaRica #CRCSRB #LondonIsOpen pic.twitter.com/FsnKwBHq2O

Bloody football, ruined by technology? The Aussies would certainly agree. Day three of the #WorldCup has been a controversial one. #WatchingWithTheWorld pic.twitter.com/0HtoenJit3

And Tunisia equalise, the crowd at Sidi Bou in Ealing are loving it! #BBCWorldCup #WorldCup #TUNENG #Tunisia #England pic.twitter.com/2d6WxWWoFQ

"We've had some amazing invitations, from the Korean Cultural Centre to an Argentinian family home in Balham, but we're appealing to Londoners of all nationalities to invite us to watch their team with them," Mr. Burns told Sputnik.

Perhaps the most difficult game to watch for England supporters Kevin Masters and Adam Burns, given they joined fans at a Tunisian restaurant in London, was the England vs Tunisia game on June 18.

Kev didn’t quite manage to stifle his celebration and neither did Hamza, he’s supporting England but his Mum, Beya, is sticking to Tunisia. Great night in Sidi Bou in Ealing. #WorldCup #England #TUNANG #Tunisia #LondonIsOpen pic.twitter.com/zSNGxQNGGq

"At a half-time the restaurant got an anonymous call saying that England supporters would "smash up the restaurant," which left a waitress shaken. Inside however, Tunisia and England fans were watching together happily," WWTW said on Twitter.

There are two types of people in this world | We had an amazing evening at Sidi Bou in Ealing, the only #Tunisian restaurant in the UK. Shame one idiot decided to make a threatening phone call to the restaurant. Mindless. #WorldCup #BBCWorldCup #ENGTUN pic.twitter.com/Cah1gq5Uv5

"London is often described as the most multicultural city in the world, but how often we actually experience it? The World Cup gives us an opportunity to get out and meet Londoners from all over the world, as for one month we will all be speaking the same language, football," Paco Lopez, originally from Girona and now living in Stoke Newington, told Sputnik.

When asked to name top three candidates to win the World Cup, the WWTW creators named the following teams:

"We want this project to take us to amazing places. We want to meet as many Londoners from different countries. We'd love to watch the World Cup final with lots of different nations together," Mr. Burns said. 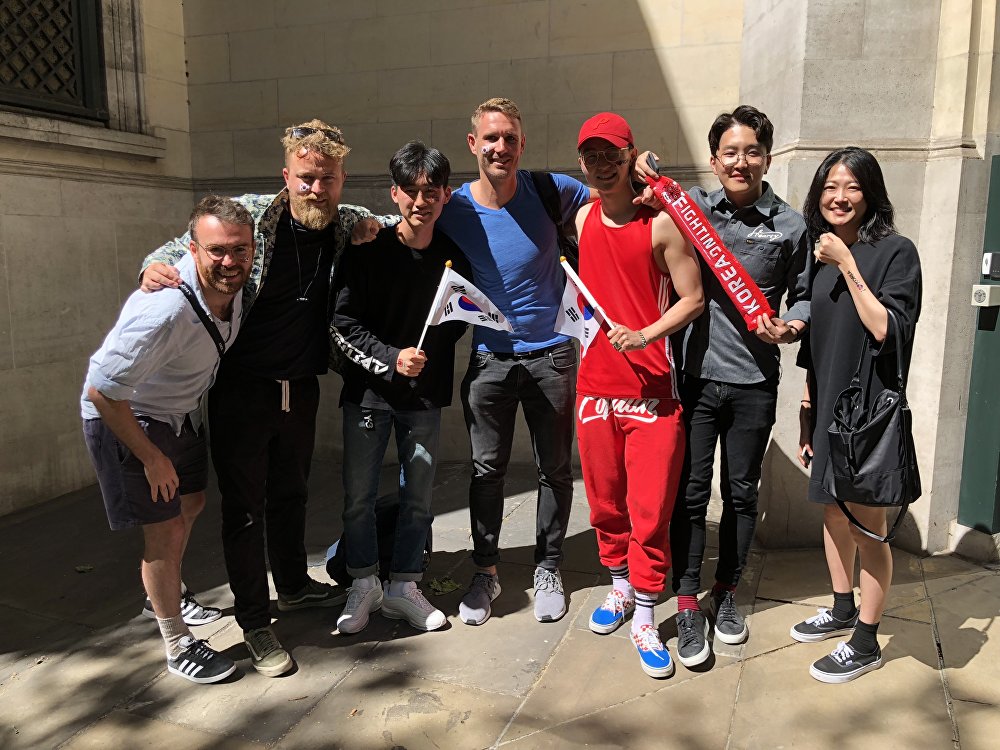