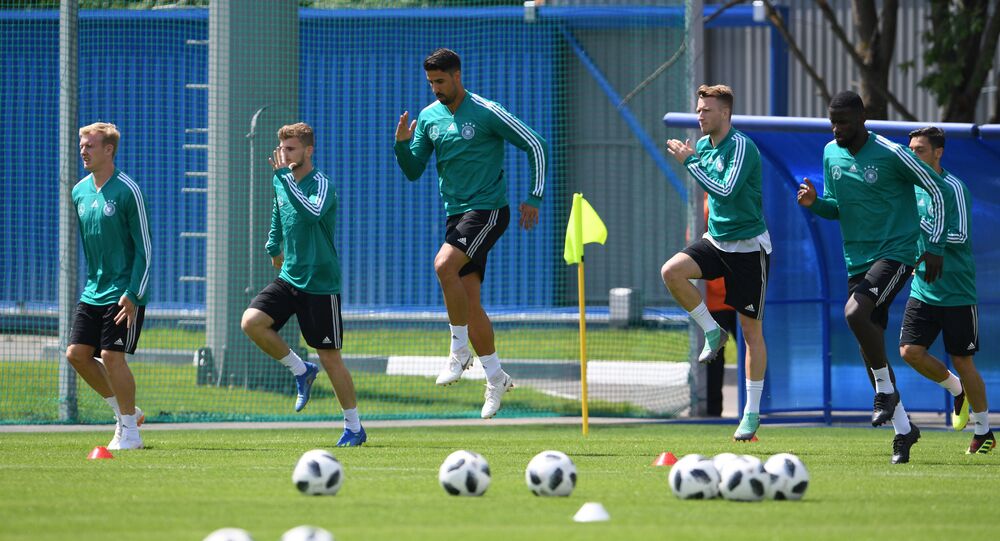 VATUTINKI (Sputnik) - Germany head coach Joachim Low said on Wednesday that the grass at the team's training ground was a little bit too long but the training center was "very good" overall.

During the World Cup, the team will be based in Vatutinki, just outside Moscow, and will be training at CSKA Moscow's base. The players held their first training session on Wednesday after their arrival in Russia.

"At the beginning of the training, we found the grass here is a few millimeters too long. I hope this will be dealt with by tomorrow. But otherwise the grass here is in a very good condition… The training center here is very good," Low said, adding that the center provided all the necessary conditions for the players to prepare for their World Cup games.

🇷🇺🇩🇪Welcome to #Russia! ⚽️Willkommen in Russland!
German national football team arrived in Moscow ahead of #WorldCup!
The German footballers will stay at Vatutinki, a health complex on the bank of the Desna River 16 km southwest of @Moscow🌊 pic.twitter.com/zQRMwBNLoB

​The German head coach also said that midfielder Julian Draxler had not suffered any injury, despite requiring medical assistance during training.

"Draxler was able to finish the session and there is no danger. [Midfielder Sami] Khedira had some back problems and he left the training early as a precaution. I think he should be fine tomorrow or the following day," Low said.

​Low added that he had not yet decided on the starting line-up for Germany's first match at the tournament against Mexico on June 17 adding that he needed another three or four training sessions to make up his mind.

"I cannot yet say who will be in the line-up for the match against Mexico. [Midfielder Mesut] Ozil is not fully ready yet, though he is eager to play. However, as of today, he has no problems. He has a good chance [of playing against Mexico]. The line-up will be chosen on Saturday," Low said.

Ozil sustained a minor knee injury during Germany's 2-1 defeat against Austria in a friendly on June 2.

​Russia's first-ever FIFA World Cup will be held from June 14 to July 15 at 12 stadiums in 11 cities across the country. Reigning champions Germany will face Mexico, Sweden and South Korea in Group F.