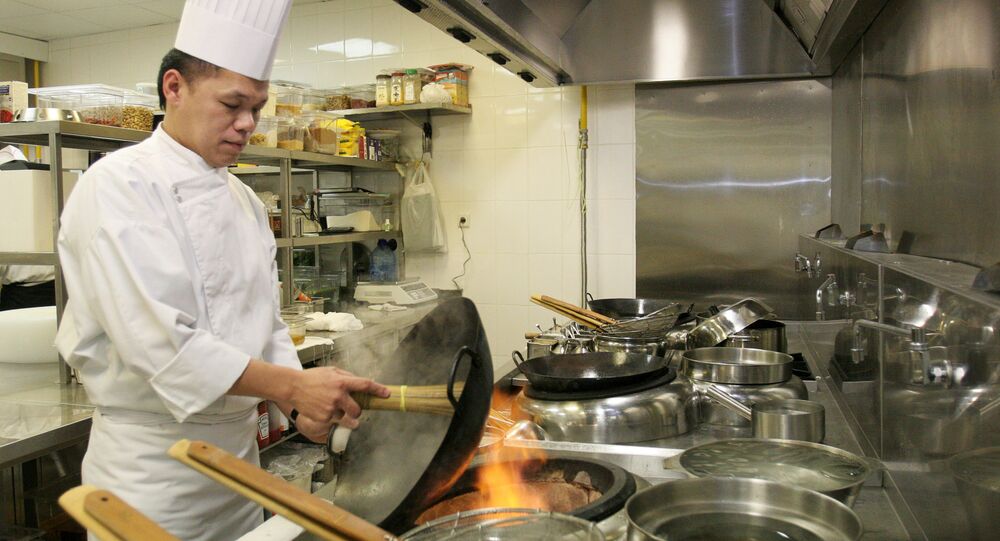 MOSCOW (Sputnik) Tommy Yang - When millions of football fans will flock to Russia for the World Cup in two weeks, one group of fans could have a unique craving that is not easily satisfied.

Coming from one of the most ancient civilizations on earth, visitors from China have always faced the same dilemma when traveling abroad — finding authentic Chinese cuisine that can keep their "Chinese stomachs" happy.

"I have read a book from a Western scholar who lived in China for a long time. In the book, he described what he saw as ‘the Chinese stomach that can never be changed.’ For Chinese people like me, this is very accurate. We are indeed very different from tourists from other countries. When they travel overseas, they would like to try local cuisine. But for Chinese tourists, when they arrive in Russia, the first meal is enough to try local Russian food. From the second meal on, they would demand ‘please take us to eat Chinese food.’ This is indeed very beneficial to restaurants like mine, which offers authentic Chinese food," Zhang said.

Restaurants offering authentic Chinese cuisine in Russia are ready to step up their game to satisfy Chinese football fans' cravings for a taste of home during the World Cup.

China’s national football team’s failure to qualify for this year’s World Cup has not deterred passionate Chinese football fans, who are used to the lackluster performance of their national team, from buying tickets to watch the tournament in person. According to the latest figures from FIFA, a total of 36,841 fans from China have purchased tickets for the World Cup; this is the most number of tickets purchased by people from countries that did not qualify for the tournament after the United States.

© Sputnik / Ivan Rudnev
Israeli Minister: No FIFA 2018 World Cup Matches for Hamas Detainees
When the tens of thousands of Chinese football fans come to Russia for the World Cup, their food cravings may also be different from those of typical Chinese tourists, who have less freedom to order individual dishes as their meals as usually included in the tour package, according to Jin Min, a manager at a Chinese restaurant called New Era, located within walking distance from the Kremlin.

"We have been trying to prepare all kinds of ingredients to meet the demand from Chinese fans. I am sure they cannot get used to eating Russian food. We will try our best to satisfy the cravings from Chinese visitors," she said.

Jin said she expected a new batch of fresh green vegetables, specially ordered for Chinese fans, to arrive next week.

Jin added that her restaurant had to import some of the ingredients such as lotus roots from China, even though the price usually comes out to be almost 20 times higher. According to Jin, imported lotus roots cost about $10 per kilogram in Russia, while the retail price in China stands at around $0.5 per kilogram.

Sometimes, her restaurant would offer dishes that are not listed on the menu to meet special demands from visitors, Jin explained.

"I grew up in Shaanxi province in West China. A group of customers on a business trip to Moscow came to our restaurant and wanted to eat the special type of noodle dish called ‘shaozi noodles.’ It was rather difficult to make this dish for them because the noodles, meat and sour sauce needed are not widely available here. But we still managed to make the noodles to try to offer them a taste from their home," she said.

On top of offering special dishes to satisfy food cravings from Chinese fans during the World Cup, some Chinese restaurants in Moscow also prepared to work with famous brands from China to attract more customers.

"We have been working with the famous Tsingtao Beer to launch a special promotion in our restaurants, which allows customers to scan a barcode to receive discounts on beer purchases. We have also installed flat screen TVs with full access to World Cup-related programs. Our customers can enjoy their beer while reviewing the highlights from the previous day’s games," Zhang Xingcheng, who owns two Chinese restaurants called Qing Dao and Green Tea in Moscow, told Sputnik.

Originally from Shandong province where Tsingtao Beer is based, Zhang took advantage of his local connection from home to secure this special promotional deal targeting Chinese football fans.

For Zhang Wenhao, who runs the restaurant called Huo Guo, he said that he was planning to appeal to young Chinese football fans with the modern style of his restaurant.

"The traditional stereotype about Chinese restaurant is that if a place offers authentic Chinese cuisine, it must look rather dirty with typical Chinese designs such as using red and yellow as the main theme color. I wanted to prove that a Chinese restaurant can be modern looking and meet all sanitary standards, while continuing to offer an authentic taste from China," he said.

Instead of hanging red lanterns and filling the walls with traditional Chinese paintings, Zhang’s restaurant featured a darker theme with silver lighting, which resembles a lot of modern restaurants in Europe.

© Sputnik / Alexey Filippov
French President Wants to Support National Team at FIFA World Cup in Russia
The language barrier has always been a key concern for Chinese travelers visiting Russia, as most of them have trouble reading the Cyrillic alphabet and their limited language skills in both Russian and English make it difficult for them to get around.

However, Zhang from the Huo Guo restaurant believed that individual visitors were much better positioned to handle this challenge during the World Cup, compared to typical Chinese tourists traveling in groups consisting mostly of retirees in their 50s or 60s.

"Individual travelers from China are mostly well-educated young people, who learned how to handle themselves through their rich experiences traveling abroad. A group of Chinese bikers came to my restaurant after they saw the listing on Google Maps. They know how to use Western services such as Google or Facebook very well, despite those services are being blocked in China," he said.

Zhang added that most individual visitors from China were capable of ordering food without assistance from Chinese speaking staff at his restaurant.

For most Chinese restaurants in Russia, one of the key challenges is how to appeal to local Russian customers, who may not be very familiar with Chinese cuisine. Zhang from the Qing Dao restaurant started to work with a local studio to produce promotional videos about Chinese cuisine.

"When I first came to Moscow in 1994, I started as a cook in a Chinese restaurant. I am very happy to share the secrets of Chinese cooking to the Russian audience and help them understand how Chinese food is made. I am working with a local studio in Moscow to shoot such videos, which will be shown on TV here. Hopefully, it’ll help more Russian people become interested in Chinese cuisine," he said.

As for Zhang from the Huo Guo restaurant, he believed that improved bilateral relations and increased visits from tourists in both countries could help bridge the gap.

"In recent years, more and more Russian people visited China or even lived there for a while. Many of them also fell in love with Chinese cuisine. I have met Russian customers who would come into my restaurant and ask me to make the food very spicy, just like how it’s made in China. Some people always say Russian people cannot handle Chinese food because it is too spicy. But I believe if the food is not authentic, that defeats the purpose of eating a foreign cuisine. I try to keep all the dishes in my restaurant the same taste as how they’re made in China, without this so-called ‘western twist,’" he said.

Both restaurant owners noted that to ensure the authentic taste of the food they offered, they had to hire cooks from China, who need to obtain a work permit in order to work legally in Russia, raising the overall cost of the restaurant’s operations.

Jin from the New Era restaurant added that they could not start offering Chinese pastry at the restaurant, because their pastry chef from China had not yet received a proper work permit.