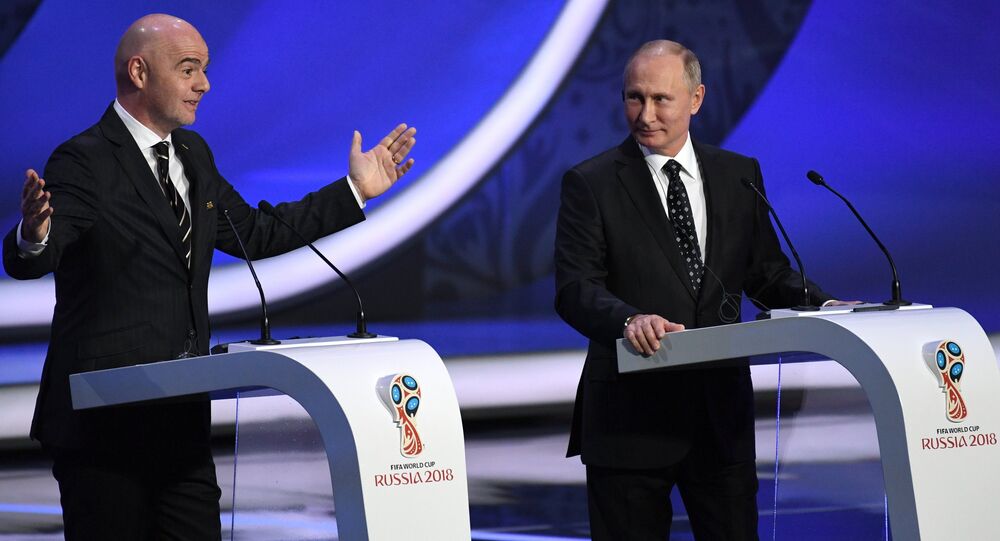 An analyst says that the enthusiasm of Indians is not surprising, as there are ample football fans in the country, but the fact that Russia is holding the event this year has added to their excitement, prompting a record number of Indians to buy tickets to watch the event live.

New Delhi (Sputnik) — Notwithstanding the fact that India is not among the teams participating in the FIFA World Cup, a huge number of Indians are visiting Russia to witness live the football extravaganza. According to an estimate, fans from the country are buying more FIFA World Cup tickets than their English peers who are known the world over as the biggest football fans.

"Indians, particularly from the states of Kerala and West Bengal, participate in large numbers to witness live World Cup matches and it has been a trend for a long time now. In case of the upcoming FIFA World Cup, there is additional enthusiasm for the fact that Indians feel emotionally connected with Russia and the people of that country," celebrated Indian footballer I M Vijayan told Sputnik.

READ MORE: For Belgium, This Generation FIFA 2018 to Be Most Important World Cup' — Witsel

Vijayan along with many of his fellow footballers is also headed to Russia to witness the football extravaganza.

Indian FIFA fans, who were successful in purchasing online tickets, expressed excitement to visit Russia for this global event.

One of the successful buyers, Rohit Saxena from New Delhi, who will be visiting Russia with his young son Vir Saxena, told Sputnik, "My son and I are very excited and looking forward to visiting Russia for the FIFA World Cup. We got a chance to purchase our tickets when the online purchasing window opened in March for a few days. Although there was an online queue the purchase process was fairly simple. A few hours later we were presented available match tickets. Out of those we quickly selected our preferred matches in Moscow. The best part of the process is the FanID — that's given to everyone who has a ticket. With this FanID we do not need a visa to enter Russia, will get free transport on the metro and between cities in Russia."

"In addition to football, I have a keen interest in the history of world wars. We are looking forward to visiting some of the popular museums and related sites in and around Moscow," Rohit added.

A report carried by the Irish Examiner news portal says that almost 400,000 World Cup tickets have been sold in the latest FIFA allocation, but England fans have remained reticent buyers. The sales window opened on March 13 and saw a total of 394,433 tickets purchased. Russia accounted for the vast majority of that number, with 216,134 going to home supporters. United States, Argentina, Colombia, Mexico, and Brazil represented the top five overseas nations and Peru, China, Australia and India figured in the top 10 countries while England did not. India accounted for 4,509 sales.

Travelling to #Russia for the 2018 FIFA World Cup™? Our blog is full of brilliant tips & fascinating facts to help you get the most from your trip https://t.co/fo8EUXvLAP #football #WednesdayWisdom pic.twitter.com/HvMuY9GRii

The Russian National Tourist Office has meanwhile posted on its Twitter handle that it is willing to extend all help to tourists in making their trip to Russia a memorable one.

Make your FIFA World Cup 2018 trip a reality. We can help you with flights, hotels, Fan ID, visa, match schedules, insurance, the best places to eat & drink, everything you need to have a wonderful & memorable trip to #Russia https://t.co/JHAJ4TOfKX #TuesdayMotivation #football pic.twitter.com/T2WizAHGJT