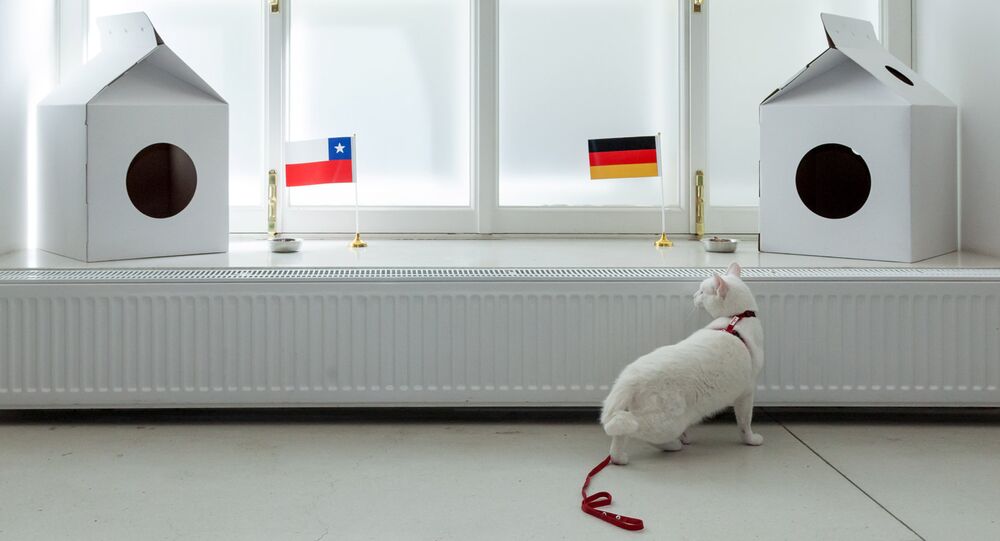 ST. PETERSBURG (Sputnik) - Achilles, one of the famous cats living at St. Petersburg's Hermitage museum, has become the animal oracle, who will forecast the outcome of matches for this summer's FIFA World Cup in Russia, Maria Haltunen, spokeswoman for Hermitage's cats said on Monday.

Achilles has already fulfilled a similar role during the 2017 FIFA Confederations Cup, also held in Russia.

"There will be a special press conference and it [Achilles] will get a fan ID. The decision has already been made, the papers have been signed," Haltunen said.

The spokeswoman said that Achilles had recently had holidays living with a family where he put on about a kilogram (over 2 pounds) and weighs now 4.72 kilograms.

The cat was chosen as an oracle for the Confederations Cup because of his good resistance to stress and well-developed people skills. Achilles, who was born with a hearing impairment, was also chosen in part due to his analytic abilities and unusual behavior.

The cat made his predictions of a potential winner by choosing one of two plates of food, each marked with the flag of one of the teams.

Cats have been living in the museum since the early 18th century, when Peter the Great brought a cat from the Netherlands to his residence. Catherine the Great officially conferred the status of painting gallery guardians on the cats living in the palace. The tradition of keeping cats to protect the galleries from rodents was suspended only during the blockade of the city in the World War II.

© Sputnik / Anton Denisov
Jason Derulo Releases 2018 FIFA World Cup Anthem
At the moment, about 50 cats live in the cellars of Hermitage and a special department was formed to handle their needs.

Russia will host its first FIFA World Cup from June 14 to July 15. The matches will take place in Moscow, St. Petersburg, Kaliningrad, Volgograd, Kazan, Nizhny Novgorod, Samara, Saransk, Rostov-on-Don, Yekaterinburg, and Sochi. The first game of the World Cup tournament — Russia vs. Saudi Arabia — will be held in Moscow on June 14.

The most famous oracle animal was Paul the Octopus, who forecast results of matches of the UEFA Euro 2008 and FIFA World Cup 2010. Paul made only two mistake in 14 matches that were subjected to his forecasts.

Big Cat Gets a CAT Scan

Cute Cat-alogue: Furry Felines to Brighten Up Your Day

This Cat Has All The Chill