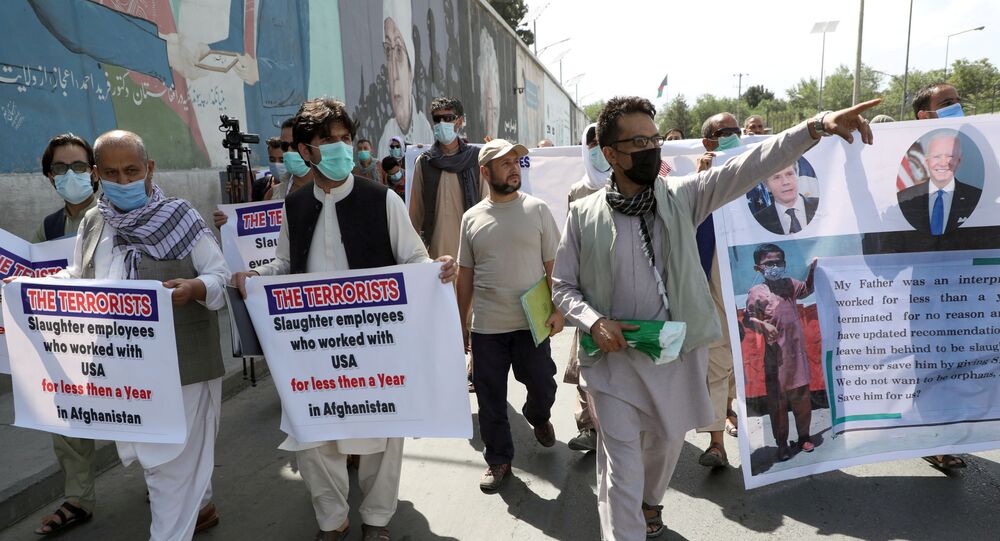 US to House Some 35,000 Afghan Interpreters, Families at Kuwait and Qatar Bases - Reports

WASHINGTON (Sputnik) - The United States is getting prepared to house up to 35,000 Afghan interpreters and their families at US bases in Kuwait and Qatar as part of an initiative to help those who risked their lives to help US forces during the war, the Wall Street Journal reported on Thursday.

The US military is preparing to house the interpreters and their family members at two bases in Kuwait and in Qatar in an effort to aid those who may face retribution from the Taliban*, the report said citing US officials.

The United States intends to construct temporary housing at Camp As Sayliyah in Qatar and Camp Buehring in Kuwait. The facilities will be designed to house the interpreters for a period of at least 18 months while they await approval of their Special Immigrant Visas to relocate to the United States.

© AP Photo / Mariam Zuhaib
Pressed for Time, Pentagon Looking for Installations to Transfer Afghan Interpreters
The facilities are also being stocked with thousands of welcome packages containing health and comfort items, as well as meals that accommodate Muslim dietary requirements, the report said.

The measure to house the interpreters and their families is expected to cost the US taxpayers several hundred million dollars.

On Monday, Pentagon agreed to use the Fort Lee military base in the state of Virginia to temporarily house Afghan interpreters and their families who have already completed the security vetting process.

Last week, US Central Command said the troop withdrawal from Afghanistan is more than 95 percent complete. Meanwhile, reports suggest that the Taliban movement now controls 85 percent of Afghanistan, and approximately 90% of Afghanistan's border with neighbouring countries.