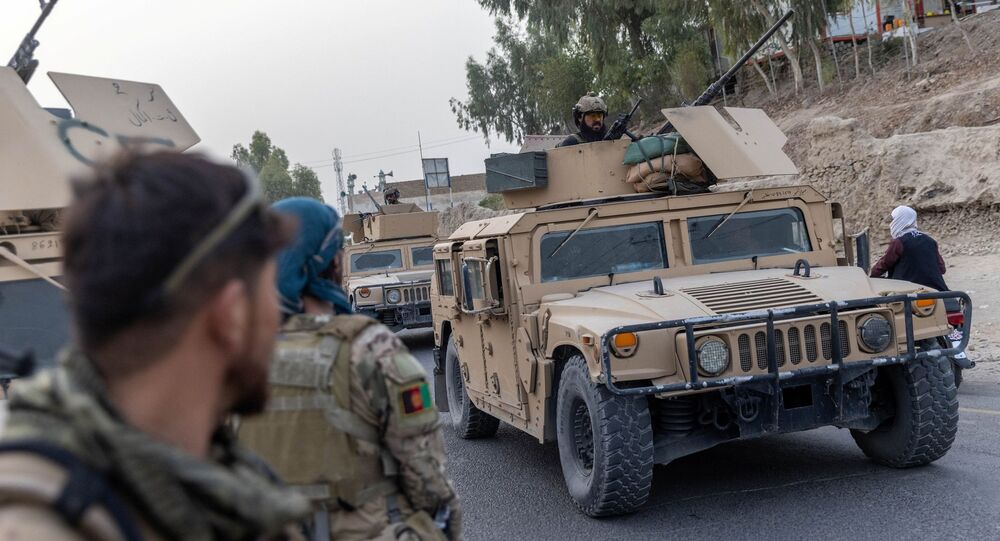 Taliban's Win Not 'Yet Written', Top US General Claims as Insurgents Seize Over 80% of Afghanistan

The terrorist movement has made significant gains, securing most of the border crossings, ever since the US confirmed its plans to withdraw troops. Washington, however, insists on Kabul's ability to defend itself.

Chairman of the US Joint Chiefs of Staff, Mark Milley, has said that the victory of the Taliban in Afghanistan is not yet a done deal. Talking to reporters during the 21 July briefing, the general supported the notion that the Afghan security forces are able to fend off insurgents' attacks.

"I don’t think the end game is yet written. A negative outcome, a Taliban automatic takeover, is not a foregone conclusion[…] We're going to find out [by the end of August], the levels of violence, do they go up, do they stay the same, there's the possibility of a negotiated outcome still out there, there's the possibility of a Taliban takeover [and] any other number of scenarios," he said.

The general stated that the Taliban controls nearly half of Afghanistan districts, but stressed that the group has not seized any of the 34 provincial capitals. Milley lauded Kabul for concentrating its forces in the highly populated provincial centres. He went on to accuse the Taliban of "propagating an inevitable victory", suggesting that such statements are unsubstantiated, though he admitted that the movement has a "strategic momentum".

© AP Photo / J. Scott Applewhite
Chairman of the Joint Chiefs Gen. Mark Milley speaks during a ceremony at the National 9/11 Pentagon Memorial to honor the 184 people killed in the 2001 terrorist attack on the Pentagon, in Washington, Friday Sept. 11, 2020

The terrorist movement itself claims to control more than 80 percent of the country and 90 percent of its borders with neighbouring states. Only a few years ago, only 20 percent of the country was considered to be under complete Taliban control. A recent media report citing anonymous sources suggested that US intelligence fears the movement might seize Kabul in between six and 18 months.

Earlier, US President Joe Biden dismissed allegations that the Taliban is poised to seize control of all Afghanistan, and gave the assurance that the Afghan National Army is able to repel the insurgents.

"The Afghan troops have 300,000 well-equipped troops - as well-equipped as any army in the world - and an air force, against something like 75,000 Taliban. [A Taliban victory] is not inevitable," Biden said.

An earlier attempt by the US to withdraw troops by 2016 was thwarted by the Taliban going on a successful offensive against the ANA and government security forces, as well as launching a series of terror attacks across the country. The latest effort to withdraw troops was started by President Donald Trump, who signed a peace agreement with the Taliban in 2020 promising to complete the pull-out by May 2021 in exchange for the movement vowing to deny a safe haven to terrorist groups. President Biden failed to meet this deadline and moved it to the 20th anniversary of the 9/11 terror attacks. The last US troops are expected to leave the country even earlier – by 31 August.

Taliban Claim Control of Some 90% of Afghanistan's Border Areas