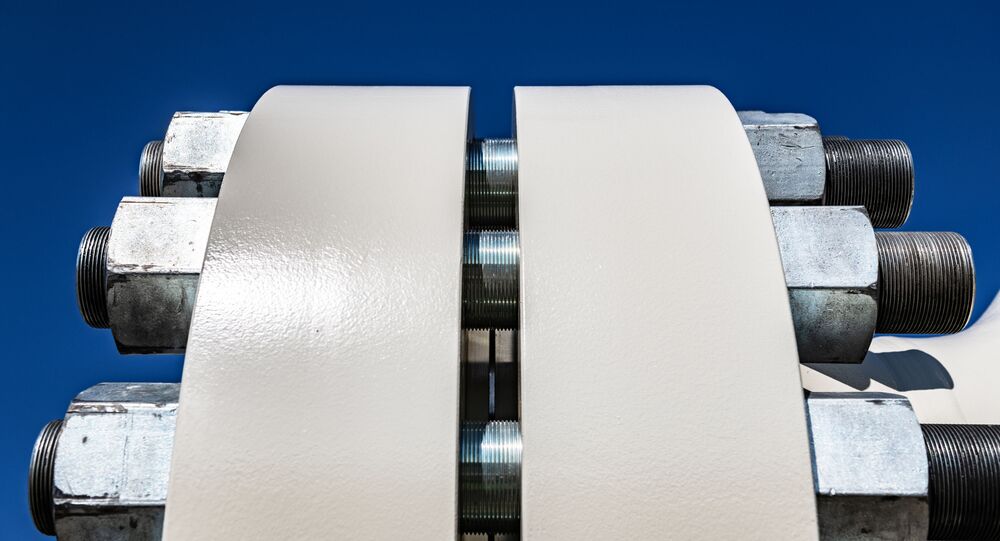 On Wednesday, the US and Germany published a joint statement on the completion of the Nord Stream 2 gas pipeline project, supporting the idea to continue the transit of Russian gas through Ukraine after 2024.

A US-German deal on Nord Stream 2 indicates that Kiev has lost status in terms of its involvement in discussing issues related to the project, former Ukrainian Foreign Minister Pavel Klimkin has suggested.

In remarks written on his Facebook page on Thursday, he described "the latest agreement" on the Nord Stream 2 gas pipeline project as "just the tip of the iceberg", adding that "many [things] remain behind the scenes".

Referring to Nord Stream 2, Klimkin argued that "the United States […] will keep its leverages, and not only open ones".

© AP Photo / Dmitry Lovetsky
In this April 9, 2010 file photo, a Russian construction worker speaks on a mobile phone in Portovaya Bay some 170 kms (106 miles) north-west from St. Petersburg, Russia, during a ceremony marking the start of Nord Stream pipeline construction.

As far as Ukraine is concerned, "the conclusions are close to catastrophic, and the matter is not only in the results", the ex-Ukrainian foreign minister noted.

"First and foremost, we are absolutely out of play. We are not listened to, and we are not looking for solutions at the table with the US, the EU, and Germany as we ought to. We are not even part of the process, not to mention the result. We make a lot of emotional statements, which have the same power as last year's snow, and which are viewed by everyone as ineffective', Klimkin argued.

According to him, a tangible "deficit of trust and respect" is accumulating with respect to Kiev.

The remarks come after the US and Germany unveiled a deal on Wednesday to allow the completion of Nord Stream 2, a long-standing point of contention between the two allies.

Under the deal, Berlin commits to "utilise all available leverage to facilitate an extension of up to 10 years to Ukraine's gas transit agreement with Russia".

"The United States and Germany are united in their determination to hold Russia to account for its aggression and malign activities by imposing costs via sanctions and other tools. Should Russia attempt to use energy as a weapon or commit further aggressive acts against Ukraine, Germany will take action at the national level and press for effective measures at the European level, including sanctions, to limit Russian export capabilities to Europe in the energy sector, including gas, and/or in other economically relevant sectors", the two's statement pointed out without elaborating.

The Russian president's spokesman Dmitry Peskov, for his part, underscored that the Kremlin fully disagrees with the remarks.

"We categorically disagree with this wording. Neither in Ukraine nor beyond its borders, there has never been any aggression by Russia. Russia has not engaged in any harmful actions. And it is not engaged in them", Peskov told reporters.

He also stressed that "Russia has always been and remains a responsible guarantor of energy security on the European continent, or I would even say on a wider, global scale".

German Chancellor Angela Merkel, for her part, asserted that the Berlin-Washington deal on Nord Stream 2 does not resolve all the differences between the two countries with regard to the project, but it marks a step forward.

Nord Stream 2, which is 98% ready, aims to deliver up to 55 billion cubic metres of Russian natural gas to Europe annually, bypassing Ukraine, which has repeatedly voiced concern over transit supplies.

© Sputnik / Sergey Guneev
Why US-Germany Deal on Nord Stream 2 is a Face-Saving Move Veiling Washington's Defeat
The project is opposed by the US, with the Biden administration earlier waving sanctions against Nord Stream 2 and saying on Wednesday that they had moved not to obstruct the pipeline's construction because they realised sanctions would not work and because they wanted to avoid alienating Germany.