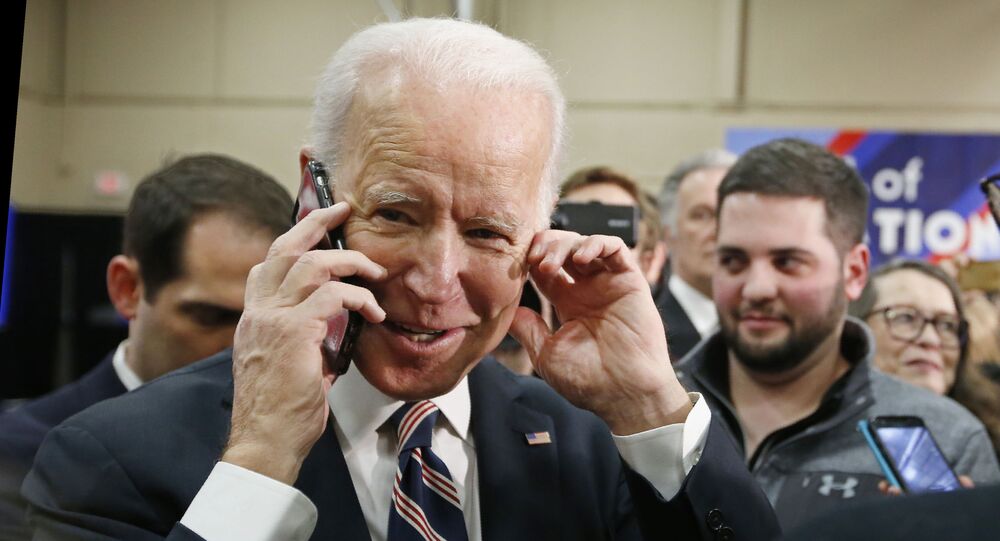 'Bald-Faced Lie': Snowden Confident That Even Biden's Phone Could be Hacked by Pegasus Spyware

The NSO Group says that it is technologically impossible to spy on phone numbers with a +1 country code as well as foreign ones operating within the United States. The “Pegasus Project” has revealed that the spyware was used by the Israeli firm’s clients to possibly target US phone numbers as well, raising national security concerns in Washington.

Whistleblower Edward Snowden has claimed that even American phone numbers could be subjected to spying using Pegasus malware, as he called out Israel’s NSO Group for claiming that its surveillance technology doesn’t work against smartphones based in the US.

“NSO's claim that it is 'technologically impossible' to spy on American phone numbers is a bald-faced lie”, Snowden, a former computer intelligence consultant with the US National Security Agency (NSA), tweeted.

NSO's claim that it is "technologically impossible” to spy on American phone numbers is a bald-faced lie: a exploit that works against Macron's iPhone will work the same on Biden's iPhone.

Any code written to prohibit targeting a country can also be unwritten. It's a fig leaf. https://t.co/1C25G2OUx8

​In a follow-up tweet, the former American intelligence contractor explained that the NSO’s “country code targeting prohibition” could be easily bypassed.

How else can NSO's country-code targeting prohibition be bypassed? Simple:

​Snowden says that the only solution to stop illegal surveillance using such spyware is to “ban the trade” altogether.

NSO has no way to know if anyone has done this in the past—or is continuing to do this right now. Exploit code can be caught and copied.

Just as with a biological virus, it takes just a single digital infection for the possibility of retransmission—and mutation. Ban the trade. https://t.co/Cv9xFUDetT

​In an interview with The Guardian, Snowden claimed that “ordinary people” could do nothing to keep their phones from being hacked.

“There are certain industries, certain sectors, from which there is no protection, and that’s why we try to limit the proliferation of these technologies. We don’t allow a commercial market in nuclear weapons”, he told the British daily.

According to a joint investigation conducted by Forbidden Stories and human rights group Amnesty International, Pegasus has targeted more than 50,000 phone numbers in more than 50 countries since 2016.

The list of possible targets also includes phone numbers with the “+1” country code, including in the Washington, DC area. These reportedly include those of US’ Iran Nuclear Deal negotiator Robert Malley and United Nations (UN) diplomats based in the country.

Forbidden Stories has shared the details of the alleged surveillance operation with 16 news organisations globally, including The Guardian, The Washington Post, and Le Monde.

© AP Photo / Philippe Wojazer
Morocco Reportedly Tried to Use Pegasus Spyware to Tap Macron's Phone
Snowden’s claims were made against the background of revelations that French President Emmanuel Macron’s phone number was reportedly on the list of potential targets of the NSO Group’s clients, which include at least 10 governments across the world.

French news publication Le Monde has reported that Macron’s phone was identified as a potential target by the Moroccan intelligence service. Besides Macron, the NSO Group’s clients are said to have identified Iraqi President Baram Salih, South Africa’s Cyril Ramaphosa, and the prime ministers of Egypt, Morocco, and Pakistan as potential targets.

France has opened an investigation into the snooping claims.

In its defence, the NSO Group has said that its software was only intended to be used against criminals and terrorists. The Israeli firm claims that Pegasus has only been made available to vetted governments, law-enforcement, and intelligence agencies with good human rights records.

Concerns Among Foreign Diplomats in India as Envoys From Iran, China Listed as Pegasus Targets