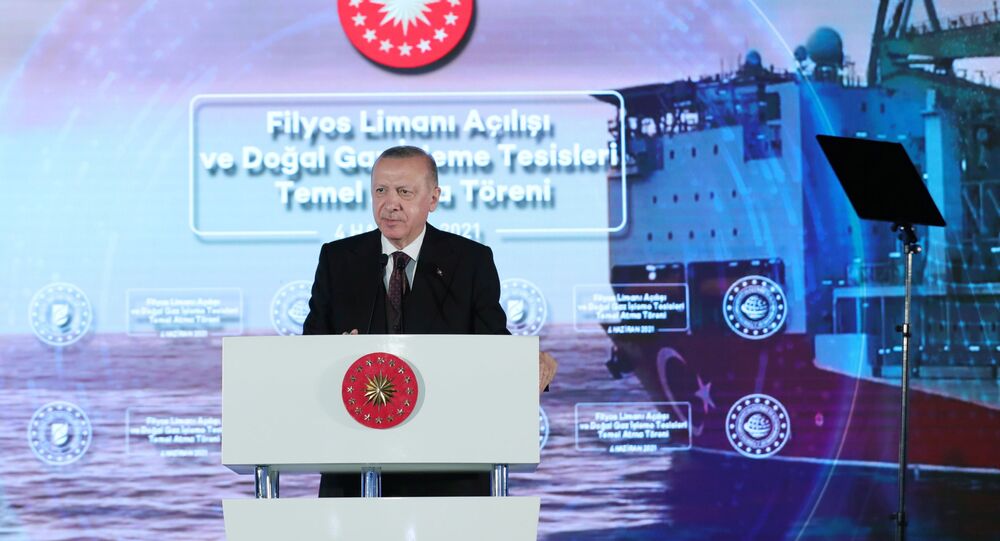 Last month, after it was revealed that Turkey may stay on in Afghanistan to ensure security at the country’s main airport once US and other NATO forces are gone, the Taliban warned Ankara that doing so would be “a big mistake".

Turkish President Recep Tayyip Erdogan has called on the Taliban to end its “occupation” of the areas of Afghanistan which are under its control, and indicated that Ankara remains ready to take control of Kabul airport if Washington provides diplomatic, logistical and financial support.

“Afghanistan is facing a new period at the moment – there are three players there: NATO, America and Turkey. The United States made the decision to leave and wanted us to manage the airport, which we have already been managing for 20 years. We view this situation positively, but we have our own conditions,” Erdogan said, speaking to reporters in Northern Cyprus on Tuesday.

“First: America will be on our side in diplomatic negotiations. Second: logistics capabilities will be mobilised for us as much as possible. The resources that are there must be transferred to Turkey. Furthermore, there are financing issues and administrative issues. The USA must support Turkey on these questions. If our conditions are met, we will think about taking over the management of Kabul airport,” the Turkish president said.

Acknowledging the Taliban’s “discomfort” with Turkey’s airport security scheme, Erdogan assured that the Turkish side would discuss the process with the Islamist militant group, noting that the militants who previously successfully negotiated with the US in Doha “should hold these talks much more comfortably with Turkey. It’s possible that we will discuss these issues with them well and reach an agreement because Turkey does not have an opposition to their beliefs,” he said.

Erdogan also suggested that Turkey has always stood with Afghanistan against “imperial powers", including in the past two decades. He did not specify to which “imperial powers” he was referring.

In separate remarks made on Monday before his departure for Northern Cyprus, which Turkey has controlled since 1974, Erdogan called on the Taliban to “end the occupation of the soil of their brothers". He added that the Islamist militant group’s vision of how the country should be governed was not the way Muslims should treat other Muslims.

Turkey, which has more than 500 troops in Afghanistan at the moment as part of the soon-to-be disbanded NATO mission, has been negotiating with the US on staying in the country to guard Kabul’s Hamid Karzai International Airport when other alliance members - including the US - leave next month. The proposal was made at the NATO summit in Brussels in mid-June by Turkish Defense Minister Hulusi Akar.

© AP Photo / Reza Shirmohammadi
'You're Making A Big Mistake': Taliban Warns Turkey as Ankara Offers Troops to Guard Kabul Airport
The Taliban warned Turkey against taking the guard duty, with a spokesman for the group suggesting that it was “not appropriate for an Islamic country to be at enmity with another Islamic country on behalf of the occupying infidels". The spokesman stressed that the Taliban has “made it clear to the occupiers that it does not accept the presence of foreign forces in any part of Afghanistan".

The Kabul government welcomed the Turkish plans, however, saying it would be an "essential" way to continue NATO support for Afghanistan.

Russia called Turkey’s plans a “violation” of the previously reached US agreement with the Taliban, and expressed doubts whether a Turkish deployment would have any impact on the security situation in the war-torn nation.

On Monday, Pentagon spokesman John Kirby said that Washington and Ankara were finalising the “modalities and details of exactly what [Turkey’s involvement is] going to look like.” Expressing the US' gratitude to Turkey over its offer, Kirby said that “security [at the airport] is going to be critical to our ability, any nation’s ability, to have a diplomatic presence in Kabul.”

© AP Photo / Burhan Ozbilici
Ankara 'Rejects' US Decision to Add Turkey to List of States Using Child Soldiers
In addition to Afghanistan, Turkey is engaged in several other military conflicts abroad, illegally deploying troops to Syria, providing military and arms support to the Tripoli government in Libya, sending military assistance to Azerbaijan in that country’s recent war against Armenian forces in Nagorno-Karabakh, launching airstrikes in northern Iraq, and engaging in a maritime dispute with Greece and Egypt over maritime boundaries in the eastern Mediterranean Sea.
...
Reddit
Google+
Blogger
Pinterest
StumbleUpon
Telegram
WhatsApp
441