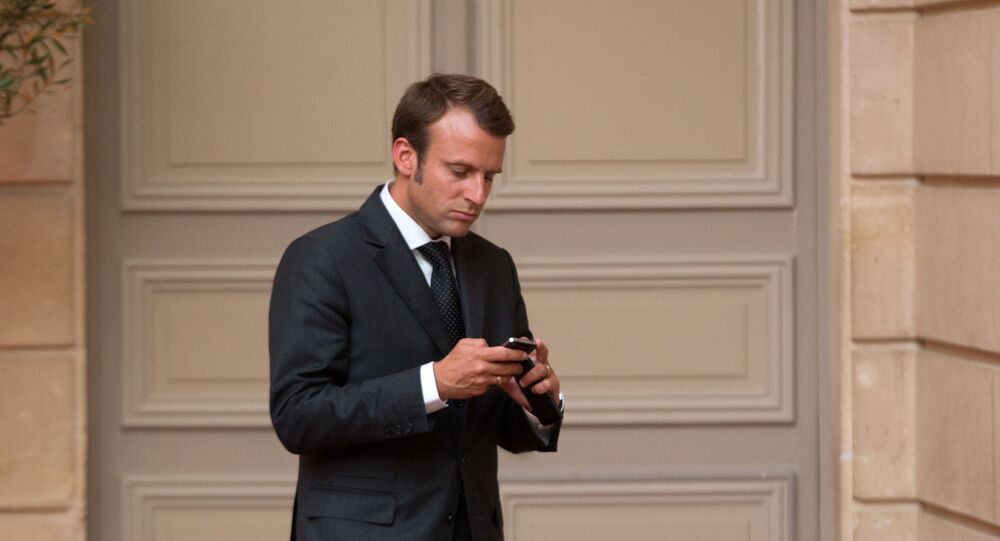 On Sunday, media discovered that the phones of at least 50,000 people around the world had been targeted using the powerful Israeli-made military-grade spyware. Paris called the revelations "shocking," with the Paris prosecutor's office opening a formal investigation after receiving complaints from French journalists who said they'd been targeted.

A smartphone belonging to French President Emmanuel Macron was targeted for surveillance by the Moroccan government using Pegasus spyware, Le Monde has reported.

According to the newspaper's information, Macron, (now former) Prime Minister Edouard Philippe, and 14 other senior members of the government were targeted to be tapped by Morocco in 2019. Macron is said to have used the targeted phone since at least 2017, the year he was elected president.

Macron is thought to use several smartphones, and has a well-known passion for the mobile devices, constantly seen talking on them, texting, video-chatting and reading information from their screens. Indeed, the French leader loves the gadgets so much that his official portrait has two smartphones in it.

Asked to comment on the report, Elysee Palace said that "if these stories are true, this is obviously very serious. These allegations will be subject to the sharpest scrutiny."

Morocco has not yet responded to the claims, but previously dismissed earlier reports of a major hacking operation targeting French journalists using Pegasus.

If Pegasus has indeed been installed on the phone of the French head of state, Moroccan intelligence could potentially have had access to virtually all Macron's private information, including his agenda, text messages, potentially sensitive emails, and phone calls. It would also theoretically be able to turn on the phone's microphone or activate its camera at will.

NSO's claim that it is "technologically impossible” to spy on American phone numbers is a bald-faced lie: a exploit that works against Macron's iPhone will work the same on Biden's iPhone.

Any code written to prohibit targeting a country can also be unwritten. It's a fig leaf. https://t.co/1C25G2OUx8

More than a dozen world leaders are among the 50,000+ people whose phones are believed to have been compromised by the Israeli-made military-grade surveillance software. Others include Iraqi President Barham Salih, South African President Cyril Ramaphosa, the prime ministers of Pakistan, Egypt and Morocco, seven former heads of government from countries including Lebanon, Uganda, and Belgium, and Moroccan King Mohammed VI. Other senior government officials, including future heads of state and government, United Nations officials and at least one staffer from the World Health Organization, have been targeted, with more than 600 officials and politicians from 34 countries struck in total. These include the US, the UK, Afghanistan, Azerbaijan, Bahrain, Burundi, Bhutan, China, Congo, Egypt, Hungary, India, Iran, Kazakhstan, Kuwait, Mali, Mexico, Nepal, Qatar, Rwanda, Saudi Arabia, Togo, Turkey and the UAE.

© REUTERS / Kacper Pempel/Illustration
Concerns Among Foreign Diplomats in India as Envoys From Iran, China Listed as Pegasus Spyware Targets
On Monday, French government spokesman Gabriel Attal called the media reports on Pegasus' extensive use "absolutely shocking stories which, if they are proved, are extremely serious." At least 1,000 French nationals, including journalists from leading French news outlets, have been targeted in the hacking.

On Tuesday, the Paris prosecutor's office said it had opened an investigation into the Pegasus hacks after journalists filed complaints. The probe is said to include charges of "invasion of privacy", "fraudulent access" to a computer system, the "interception of correspondence," and other things.

Pegasus is military-grade spyware created by Israeli security software company NSO Group. The company says it sells the spyware to governments for use against terrorists and criminals, and maintains that Pegasus has saved "tens of thousands" of lives. Sunday's reporting by a consortium of international media found that the software is being used against journalists, political leaders and opposition politicians, activists, and others. In addition to Pegasus, NSO also creates coronavirus 'track and trace' (ie spying) apps for the Israeli government. The company was founded by three former members of Unit 8200, the shadowy intelligence corps unit of the Israeli Defense Forces. Pegasus' existence was first revealed in 2016.