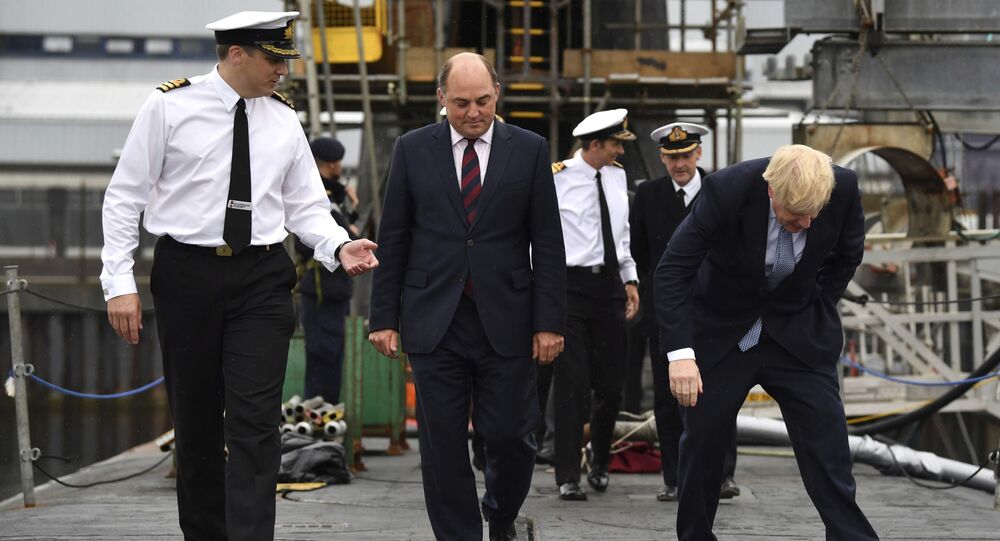 In June, a British destroyer sailed into Russian waters off Crimea in the Black Sea, prompting Russian warships and aircraft to surround the ship and fire warning shots in its vicinity, forcing it to retreat. It later emerged that Number 10 deliberately arranged the provocation in advance amid a broader British campaign to flex its military muscle.

The HMS Defender’s recent romp through Russian territorial waters off Crimea, and the Royal Navy’s deployment of its sole carrier strike group near Chinese-claimed waters in the South China Sea are signs that Britain is standing with other “civilized nations” in “deterring” Russia and China, Washington Post contributor George Will has suggested.

In a recent op-ed for the Jeff Bezos-owned newspaper, Will called the British warship’s recent sail into Russian waters a demonstration of “increasing resistance to Russian and Chinese assaults on a rules-based international order,” and repeated month-old claims by the British Ministry of Defence (debunked by a BBC journalist onboard the ship) that Russia did not fire any warning shots near the warship, but was merely conducting fire in “a previously scheduled Russian exercise nearby.”

This headline... more hilarious still is the comments section. Grown-ass adults who still think America is a force of freedom in the world... Oy Vey.

Opinion | Civilized nations’ efforts to deter Russia and China are starting to add up https://t.co/wMmrLVN3Zv

But the Royal Navy ship kept a stiff upper lip and did not alter its course, according to the WaPo columnist, signifying “how, day by day, in all of the globe’s time zones, civilized nations are, in word and deed, taking small but cumulatively consequential measures” to “deter” the Russian rule-breakers.

© REUTERS / Ministry of Internal Affairs of Georgia
UK MoD Finds ‘No Evidence’ That Leak of Dossier on Planned HMS Defender Provocation Was Espionage
This same “deterrence” was being applied against China as well, Will suggested, as signified by the deployment of the Royal Navy’s carrier strike group – led by the brand new HMS Queen Elizabeth aircraft carrier.

“Before it left Britain in May, the government said the strike group would be ‘confident but not confrontational in the South China Sea, where China illegally claims near-total sovereignty. Unfortunately, ‘nonconfrontational’ means that the group will not sail through the Taiwan Strait. Beijing will surely interpret this avoidance as a flinch,” Will lamented.

“Still,” he suggested, “with the British Army now smaller than at any time in more than three centuries, the Royal Navy, Europe’s most formidable naval power, augments the complications confronting Chinese as well as Russian military planners.”

This spring, British Prime Minister Boris Johnson unveiled his vision of a ‘Global Britain’, a military and geopolitical strategy that aims to restore the Royal Navy’s past glories and its image as Europe’s foremost naval power, and to demonstrate its ability to mount operations globally.

The concept reaped its first dangerous fruit late last month, when the HMS Defender’s sail into Russian territorial waters off Crimea (which London does not recognize as part of Russia) forced Russian forces to fire warning shots near the ship, and plunged relations between the two countries to new post-Cold War lows. The Russian military warned its British counterparts of the seriousness of the situation, calling the incident an “epic fiasco of a provocation,” warning London not to “tempt fate” and stressing that NATO should be aware that all its ships in the Black Sea are “fat targets” for Russian missiles.

© CC BY 2.0 / Dave Jenkins - InfoGibraltar / HMS Queen Elizabeth
Flagship of British Disease
Last week, Britain’s carrier strike group entered the Indian Ocean for joint exercises with the Indian Navy while on route to the South China Sea for ‘freedom of navigation” operations to provoke China. Beijing has already warned London that the People’s Liberation Army would take “necessary measures to safeguard its sovereignty, security and development interest as well as peace and stability in the South China Sea” against the carrier group.
...
Reddit
Google+
Blogger
Pinterest
StumbleUpon
Telegram
WhatsApp
386