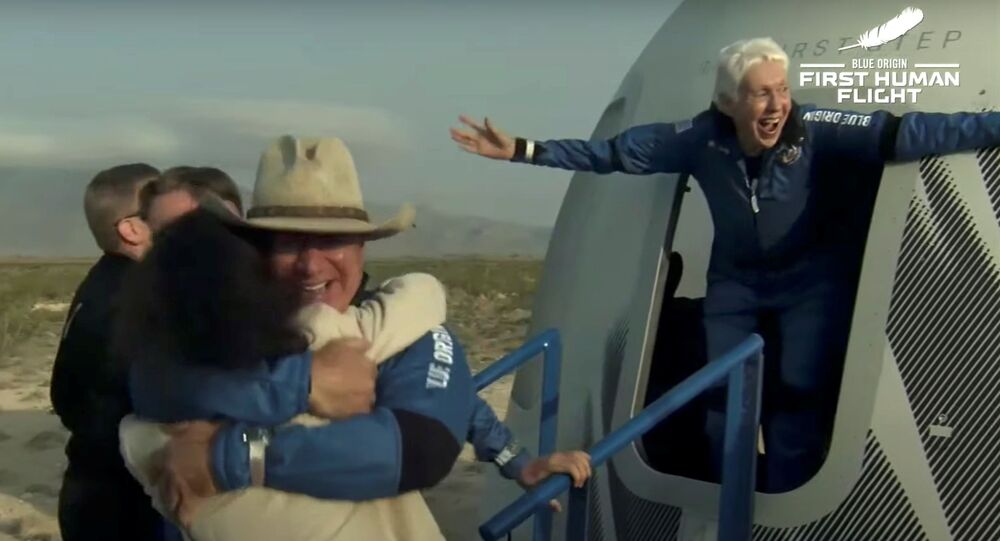 The flight lasted 10 minutes 10 seconds from takeoff to landing, with the spacecraft taking its passengers to an altitude of 107 km.

Bezos said that the Blue Origin spacecraft is going to fly two more manned missions to space in 2021 after completing successfully the first launch earlier in the day.

"We are going to fly human missions twice more this year. And what we do in the following year, I am not sure yet," Bezos said during a press conference after the flight.

He added that his high expectations about space flight were "dramatically exceeded" as he was amazed by how beautiful the Earth is.

The crew on board were Bezos himself, his brother Mike, an 82-year-old female aviator Wally Funk, who in the Sixties was denied the chance to go into space because she was a woman, and an 18-year-old Oliver Daemen from the Netherlands, who paid $28 million for his seat in a charity auction that closed last month.

Funk and Daemen have become the oldest and the youngest people to have travelled to space.

"Best day ever," the 57-year-old Bezos said after the New Shepard spacecraft touched down.

As soon as the vehicle landed, social media users started posting their reactions to a historic flight.

Some were very excited to see the flight online and congratulated the team.

CONGRATULATIONS 🚀Jeff Bezos, Mark Bezos Wally Funk and Oliver Damon🚀!!! Blue Origin New Shepard🚀1st unmanned Space Flight🥂🍾🎉!!! I watched with a lump in my throat, tears in my eyes, hands clutched my heart. Hope you enjoyed the ride! WOW! To see what you saw…

Others could not help criticising the work of Bezos' Amazon corporation.

Jeff Bezos can get to space and back in ten minutes and I can't get a package from Amazon delivered to Sweden in fewer than three weeks?? AHEM

jeff bezos should go back to space

I’m pro Bezos rocket flight. You know the only way my ass is affording space flight is if I can buy it on Amazon. Wonder if they’ll offer Prime discounts? 🤔