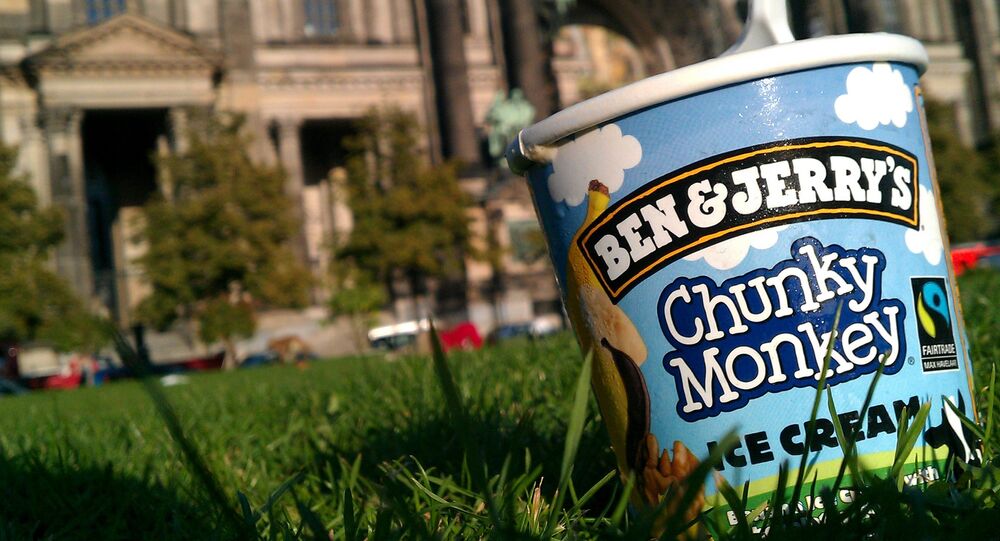 American ice cream company Ben & Jerry’s has declared that it will no longer distribute its famed products in the "Occupied Palestinian Territory," but that distribution will still continue within the Israeli state. Since the announcement, a bevy of criticism has emerged across social media.

Israeli officials have blasted US ice cream company Ben & Jerry’s after it was revealed that the firm would no longer be distributing any of its products within what it considers Israeli-occupied territories.

The popular manufacturer made the announcement early Monday, explaining in a statement that the move was prompted over concerns raised by “fans and trusted partners,” as well as beliefs that “it is inconsistent with our values for Ben & Jerry’s ice cream to be sold in the Occupied Palestinian Territory (OPT).”

“We have a longstanding partnership with our licensee, who manufactures Ben & Jerry’s ice cream in Israel and distributes it in the region. We have been working to change this, and so we have informed our licensee that we will not renew the license agreement when it expires at the end of next year,” the company detailed.

However, the decision does not mean that the ice cream will no longer be sold in the region. In fact, the company noted that it will remain operating in Israel “through a different arrangement.”

Within moments of the company’s big reveal, critics emerged, including former Israeli Prime Minister Benjamin Netanyahu, who was among the first to flock to Twitter and slam the ice creamery.

“Now we Israelis know which ice cream NOT to buy,” the former prime minister wrote, before a tweet from the official Twitter account of the Israeli state remarked that a new flavor for the company could be “FudgedThisOneUp.”

Israeli Prime Minister Naftali Bennett blasted the move as being “a morally wrong decision” that will in turn become a “business mistake” for the Vermont-based company.

“Ben & Jerry’s decided to brand itself as anti-Israel ice cream,” Bennett continued, adding that the “boycott against Israel … reflects that they have totally lost their way” and will only prompt Israel to bolster its stance against the boycott push.

Yair Lapid, the Israeli minister of foreign affairs, has also weighed in on the development, deeming Ben & Jerry’s decision a “shameful surrender to anti-Semitism, to [the boycott, divestment and sanctions], and to all that is wrong with the anti-Israel and anti-Jewish discourse.”

Ben & Jerry’s Israel distributor, whose current license expires in December 2022, has vowed to fight the move and urged Israelis to buy locally-produced ice cream instead, noting on Twitter that “ice cream is not part of politics.”

The ice cream company has been operating in Israel since 1987 and, through its franchise, has managed to establish both a manufacturing facility and two shops in Tel Aviv and contracts for sales inside grocery stores in the West Bank.

‘This Is Not About Israel’

As many have offered their own personal take on the company's decision, a newly surfaced report has detailed that the Monday announcement was issued by Unilever, which acquired Ben & Jerry’s in 2000.

Incidentally, the purchase agreement between the two parties outlined that the company would create an independent board that would have full control over Ben & Jerry’s social missions and policies. Anuradha Mittal, who chairs the board, explained to NBC News that the agreement was done “so that a progressive business could ensure its independence and protect its values when acquired by a large corporation.”

However, when it comes to the release, it was by no means cleared by the board.

© AP Photo / Richard Drew
FILE - In this Thursday, March 15, 2018 file photo, the logo for Unilever appears above a trading post on the floor of the New York Stock Exchange. Consumer products giant Unilever, said Thursday July 23, 2020, that second-quarter sales were only slightly lower than the same period a year ago despite the lockdown measures triggered by the global fight against the coronavirus.

Although Unilever has not yet addressed statements issued by the board, it previously acknowledged in its own release that the company will remain “fully committed to our presence in Israel.” It also stated it “recognized” the rights of the independent board.

Mittal shot down Unilever’s earlier comments, calling it “stunning that they can say that when the statement was put out without the approval of the board.”

The latest comes as Ben & Jerry’s drew widespread criticism for remaining silent throughout the violent clashes between Israeli and Palestinian forces in the Gaza Strip in May, as the company has been known to weigh in on a variety of issues, such as climate change, systemic racism and the violent riot that overtook the US Capitol in early January.