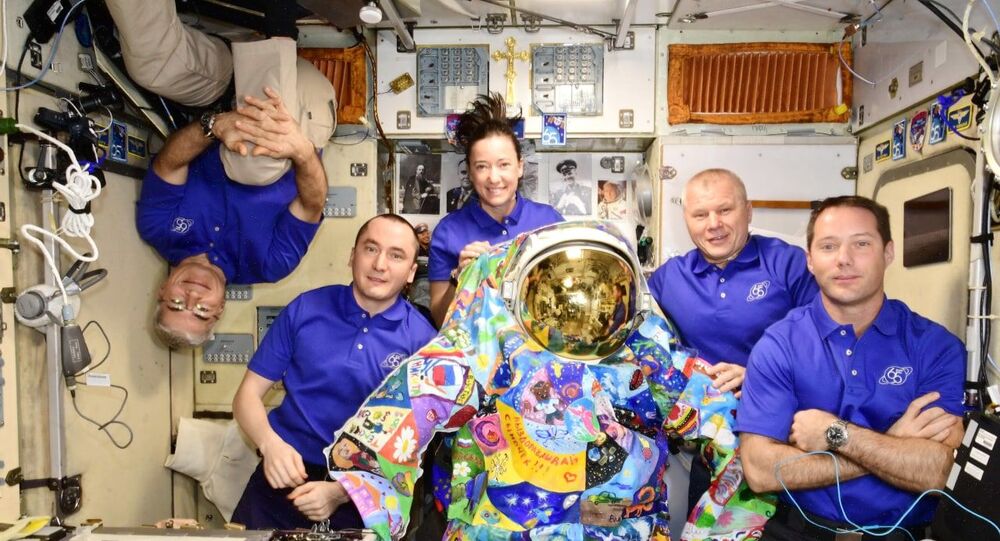 WASHINGTON (Sputnik) - The crew of 65th expedition to the International Space Station (ISS) has sent a video message to the cancer patients who took part in creating the so-called Dreamer spacesuit and will later telephone them, Russia’s Unity Foundation that co-developed the Spacesuit Art Project said.

Sputnik is the first news organization to have obtained the video message.

"Cancer is a difficult test for patients and their families. To support and inspire them to recover, the members of the 65th ISS expedition sent a video message to the creators of the Dreamer art spacesuit," Unity Foundation President Alena Kuzmenko said. "And now the team of the Unity charitable foundation will send it out to the children and their parents. And cosmonauts and astronauts in their free time will call young artists to personally greet them from orbit."

"Dear earthlings and dreamers, greetings from the International Space Station. We have an unusual crew member with us today whose name is Dreamer and this means that your dreams have reached the stars," Hei said.

McArthur pointed out in the message that the young dreamers gathered all their strength and courage to take up paint and brushes and put their innermost dreams about life and happiness on a spacesuit.

"We, cosmonauts and astronauts as well as our earthly space colleagues, try very hard and did everything possible to make your cherished dreams reach space," she said.

Pesquet said in the message that the difficult path to health and happiness begins with a dream about life.

"Dream, paint, create and we will do everything for the stars to hear your dreams and help make them come true. Be healthy and happy," he said.

The Dreamer art spacesuit has been onboard the ISS for three months since it was delivered by the manned spacecraft Soyuz MS-18 and was treated as an actual crew member.

Cancer patients from 20 cities in ten countries decorated the spacesuit as a part of the Space Suit Art Project, an endeavor supported by Russia's state space corporation Roscosmos, the US National Aeronautics and Space Administration (NASA) and other space agencies.

The Unity team has been collecting cancer patients’ drawings for more than two years in Russia, Switzerland, Germany, France, United Kingdom, Armenia, Zambia, Belgium, Serbia and the United States. Cosmonauts and artists have so far visited ten cities from Kaliningrad to Blagoveshchensk.

Kuzmenko explained that the drawings include such themes as family gatherings, delicious food, pets and others.

"If for ordinary people these are easily achievable desires, their embodiment for a child who is undergoing long-term treatment in a hospital is akin to a miracle," she said.

Kuzmenko shared that Ksenia from Krasnoyarsk drew her wish - to celebrate the New Year at home - two years ago, when she was undergoing chemotherapy.

"The prognosis was not good, but still her dream came true. So the art-spacesuit began to ‘work’ even before flying in space," she said.

Similarly, a boy from Lipetsk wanted to move into their own house with his family, when the Dreamer spacesuit reached space, and his wish also came true despite seeming impossible at first.

"We hope that the dreams of other guys will come true," Kuzmenko said. "We also hope that the boy, who was forced to give up hockey due to his illness, will again stand up and take the hockey stick in his hands, and the girl on crutches will be able to comprehend the art of dance and become a ballerina as depicted by her on the spacesuit."

The Space Suit Art Project was launched in the United States by artist Ian Cion and astronaut who is also an artist, Nicole Stott. The project is developed globally by US Space for Art Foundation and the Unity Foundation with support from NASA and Russia’s space agency Roscosmos.