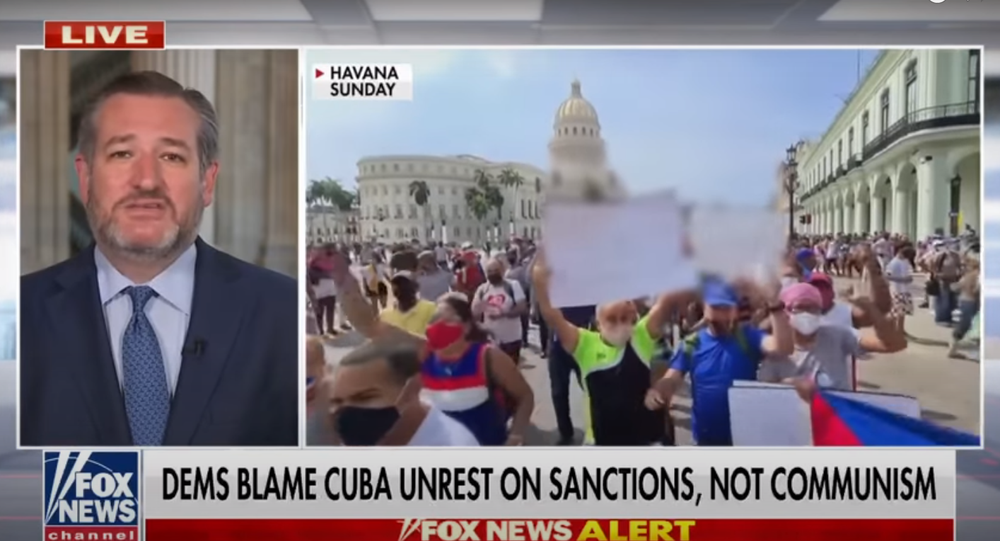 Thousands of Cubans took to the streets from last Sunday, with the marches, riots, and looting reportedly brought on by shortages of food and medicine, and problems associated with the coronavirus pandemic. Havana has accused US-financed mercenaries of responsibility for the unrest.

Fox News resorted to an odd bit of censorship this week when, during a segment featuring Texas Senator Ted Cruz singing praises to anti-government protestors in Cuba, it showed footage of pro-government demonstrators instead.

“My family, like so many millions of other Cuban families, have seen the brutal oppression of communism firsthand and I gotta say, watching these images, watching Cuban people in the streets, risking their lives, when you stand and protest, it’s one thing to wave a flag here in the US where you’re not risking your life. There they are literally risking imprisonment and death, and the American people stand with the people of Cuba,” Cruz, whose father was born in Cuba and fled to America after being persecuted by the Batista regime, said in a segment that aired Tuesday.

At the exact moment when the senator said “watching these images…” the onscreen footage showed Cubans marching through Havana carrying flags and posters, with the slogans on them curiously blurred out.

The footage in question was also used by DW in its coverage of the events in Cuba, although the German outlet did not censor the posters, revealing that the men were actually taking part a pro-government rally, with one of their signs reading “The streets belong to the revolutionaries.”

Although it went largely unnoticed among Fox’s YouTube audience, other social media users did pick up on the bit of faux news, which was clearly done deliberately if censors worked to blur the posters before the footage was allowed to air.

“Fox News is absolutely manufacturing consent,” one Twitter user wrote. “Seeing Fox News covering the Cuban protests and their footage being of a pro-government demonstration I think shows just about how much they actually care about this stuff and how much is just to further their own talking points,” another suggested. “Fox News adulterating Cuba protest footage to invert its significance,” a third wrote. “The Spanish language is offensive to them,” one more quipped.

The Cruz segment was not the only time Fox has flipped the meaning of a particular piece of footage. During the now infamous interview with Miami Mayor Francis Suarez, who said the US should consider airstrikes against Cuba to assist protesters, the news network included a photo of pro-government protestors rallying in front of the Maximo Gomez Monument in Havana. Several of the people in the photo were even armed with banners of the 26th of July Movement, a Cuban revolutionary organisation-turned political party led by Fidel Castro and his band of anti-Batista rebels.

This is outrageous. Mayor of Miami calls for airstrikes against Cuba while Fox news continues to show the picture of a pro Cuban Government rally as an anti cuban Government protest. https://t.co/XQocEFCKaX pic.twitter.com/Ma4waPrRRw

Fox News aren’t the only mainstream outlet to misrepresent footage coming out of Cuba. Earlier this week, CNN tagged an image on social media “Cubans take to streets in rare anti-government protest over lack of freedoms, worsening economy,” only to be debunked after readers pointed out the photo was actually taken in Miami.

CNN using a photo of a protest in Miami to represent Cuba is peak CNN pic.twitter.com/Eg3gdd5eOv