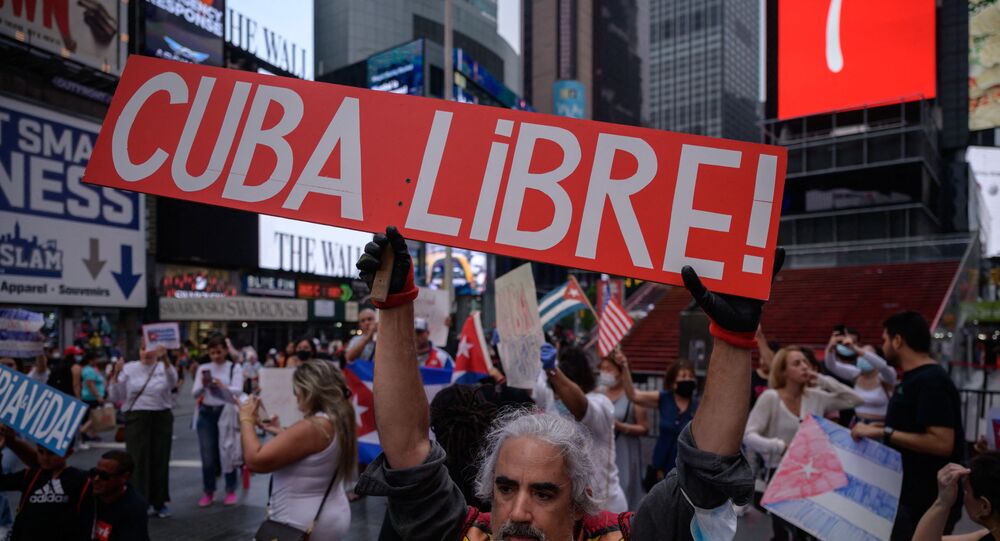 WASHINGTON (Sputnik) - The Biden administration is using starvation as a weapon against Havana by refusing to lift the very sanctions that helped fuel Cuba’s economic crisis in the first place, including those targeting payments from relatives in America, activists told Sputnik.

Cuba has seen the largest protests in the island nation since 1994, sparked by anger over shortages of food, medicine and other basic necessities. More than 100 demonstrators have been arrested and one individual has died, according to local media.

Meanwhile, President Joe Biden, despite Cuba’s dire economic situation, has so far refused to remove any sanctions that were imposed by his predecessor.

On Thursday, Biden told reporters he would not ease restrictions on remittances sent from US residents to relatives in Cuba because he fears Havana will likely confiscate the money. Biden during the same press briefing also denounced socialism as a useless substitute for communism. Moreover, ever since the protests started, the US has warned Havana that it would not lift other Trump-era measures unless the government halted its crackdown.

President Donald Trump’s administration reversed many of the steps the Obama administration took to normalize US-Cuban relations - a slight thaw that came after decades of tensions that began during the Cold War including a trade embargo Washington imposed in 1962.

"The US is using starvation as a weapon and cautioning the Cuban government not to use violence," National Network on Cuba Co-Chair Cheryl LaBash told Sputnik.

LaBash said she and her fellow activists expected Biden to follow through on his campaign promise to further normalize relations with Cuba and they were preparing to push him towards ending the embargo imposed during the Cold War.

"Biden is no Obama," LaBash said. "We’re going into July without even a modicum of change in the policy."

For example, she said, visas used to be processed in Havana instead of sending them to a third country where 90% are denied. LaBash also blasted the restrictions on trade and corporations who have to take actions such as verify the end user.

© AFP 2021 / PEDRO PARDO
Mexican President Says Protests in Cuba Manipulated From Outside
However, LaBash also said Trump worsened the economic circumstances for Cubans throughout the course of his four years in office.

"We saw Trump six months after he came into office - he went to Miami and made a speech against Cuba then proceeded to institute 243 new sanctions and put Cuba on the terror list," LaBash said. "I know that what Trump did exceeds anything placed on Cuba and he and the US have no compunction about the effect of the sanctions on the health and medical needs of the Cuban people."

LaBash said the US "surgically determined" and targeted where Cuba gets its income, which includes remittances.

"Any avenue that Cuba might have to provide relief for its people was closed," said LaBash, herself a regular visitor to the Caribbean island.

Network in Defense of Humanity-USA member James Counts Early also blasted the Biden-Harris administration for breaking its promise to normalize relations with Cuba.

"They have continued Trump’s strictures and pushed the people towards rebellion," Early told Sputnik.

Early said Obama wanted regime change too, but realized the blockade alone would not topple the Cuban government, so he pursued normalization and resumption and widening of commercial ties. Democrats and Republicans have the same goal and differ only in strategic and tactical approaches, he added.

"The US position is not to have a socialist country in this hemisphere," Early said.

Biden has discarded bilateral accords and increased the number of boat people - most of which the US has sent back to Cuba, Early said.

Early also warned that Biden is interfering with a "tricky" situation and better realize the Cuban government will do what it needs to survive.

"It’s a dangerous moment but we’ve seen the historical precedent," Early said. "Cuba will protect its sovereignty, its territory and its integrity."

Meanwhile, the rollout of Cuba’s vaccine was delayed because US sanctions prevented raw materials from being imported, according to the Cuban government. Even now, as COVID cases in Cuba rise to their highest levels since the pandemic began, Biden has made no attempt to lift the economic restrictions.

A Cuban woman who left her country in the early 2000s in search of a better life, told Sputnik that the family she left behind has weathered extreme difficulties.

"It’s a humanitarian crisis," said the woman, who spoke on condition of anonymity. "There are not enough coffins and not enough vaccines for 11 million people. Pfizer offered the Cuban government vaccine but they refused."

She said hospitals overflowing with sick people are collapsing – they have run out of medicines and beds.

Cubans routinely line up for hours at government-run grocery stores as early as 5:00 a.m., she said, while food is often rationed or unavailable which is why she buys food from an agency and they deliver it to her family.

Filmmaker Catherine Murphy believes the current situation is the intended result of what US policy has been trying to achieve for the past 60 years and the pandemic made the situation worse.

"Cuba is in this crisis because of the increased danger and mounting harm of coronavirus," Murphy told Sputnik. "The embargo and increased sanctions are so cruel."

Trump’s sanctions, Murphy explained, are affecting Cubans at the macro and family level. When Trump closed down Western Union, for example, she said "it really affected people’s ability to live."

Murphy said the country has been a tinderbox for months just as Cubans are unable to send money amid a pandemic.

Murphy said, at a minimum, the US should allow family remittances which, if reinstated, could dramatically improve the situation.

"If the US was really concerned with the needs of the human beings in Cuba, in the context of a global pandemic, why not open one avenue to allow revenue to come in?" Murphy asked rhetorically.