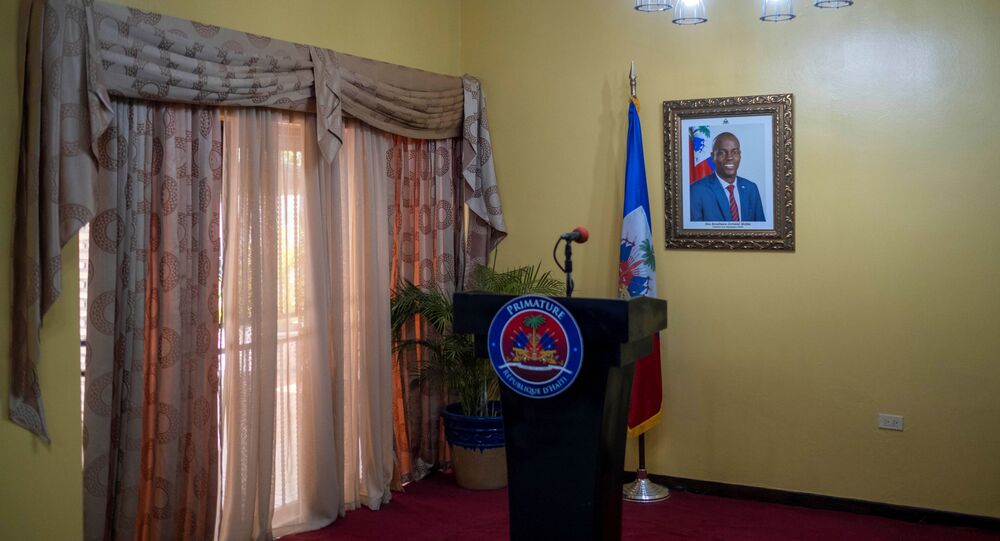 Ex-Sniper Claims Colombian Commandos Were Contracted to Protect Haiti’s President, Not Kill Him

On Tuesday, Colombian Foreign Minister Marta Lucia Ramirez said her country was cooperating with Interpol on an investigation into the assassination of Haiti’s President Jovenel Moise. Haitian officials said 26 Colombians and two US citizens were suspects in Moise's assassination last week.

A retired special forces sniper from Colombia has claimed that a group of Colombian soldiers, accused of assassinating Haiti's president, was contracted to provide security for Jovenel Moise rather than kill him.

Speaking to Reuters on Monday, Matias Gutierrez said that he was supposed to travel to Haiti with the group in June, but he instead tested positive for COVID-19.

© REUTERS / LUISA GONZALEZ
Matias Gutierrez, a former professional soldier summoned to be part of the special command of Colombians who were later involved in the assassination of the president of Haiti Jovenel Moise and who could not travel to that country due to being infected with the coronavirus disease (COVID-19), speaks during an interview with Reuters in Bogota, Colombia July 12, 2021

Gutierrez, who currently works as a security guard, asserted that his friends and colleagues had been “set up” in a “conspiracy” plot, adding, “if I had travelled, I would possibly be involved in the same thing that the commandos there are, unfortunately”.

The ex-sniper claimed that the servicemen were not involved in Moise's assassination, as they are all honourable and well-trained when it comes to assaulting a target.

“It wasn't our commandos. There has to have been a conspiracy. Their extraction was total chaos. Why? Because they weren't going on an assault, they went in support of a request by the security forces of the president”, Gutierrez insisted.

He also referred to his WhatsApp conversation with the commandos, arguing that they were expected to earn $2,700 a month for their protection of Moise and collaboration with Haitian authorities.

© REUTERS / JENNY CAROLINA CAPADOR GIRALDO
Colombian ex-soldiers, accused of involvement in the assassination of Haitian President Jovenel Moise, stand in a courtyard in Port-au-Prince, Haiti, in this undated handout photo taken by Duberney Capador Giraldo, and obtained by Reuters July 13, 2021

The remarks follow Colombian Foreign Minister Marta Lucia Ramirez telling reporters on Tuesday that her ministry is currently helping Interpol investigate the killing of Moise by trying to obtain more information about 26 Colombian and two US suspects, “in order to clarify this horrible crime”.

“Everybody who is involved, everybody who has a physical or intellectual actor of this crime must be punished […] with an extreme and very high capacity of the justice […]”, Ramirez added.

Last week, Haiti’s President Jovenel Moise was shot and killed at his Port-au-Prince home by what the authorities say was a unit of assassins made up of 26 Colombians and two Haitian Americans.

First Lady Martine Moise, who suffered three bullet wounds during last Wednesday's attack, was airlifted to a hospital in Florida in critical condition for treatment.

The US and the UN are, meanwhile, considering sending troops to Haiti to help the interim government protect key infrastructure objects following Moise's assassination.