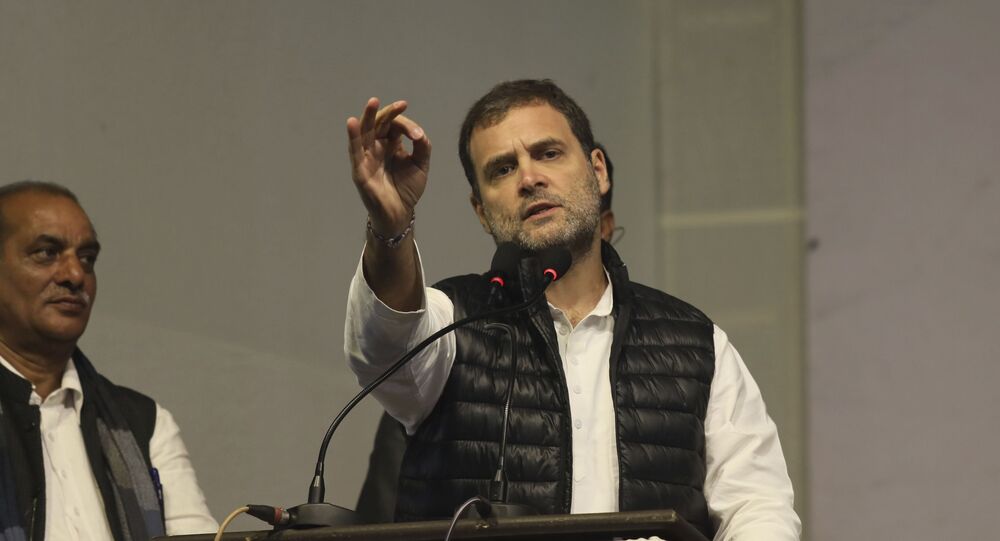 Former Congress chief Rahul Gandhi has attacked Prime Minister Narendra Modi over the India-China border tensions and even alleged that Modi's government has ceded Indian territory to China. Thousands of additional troops have been deployed by both countries in Ladakh after the disengagement process reached a stalemate in February.

Congress leader Rahul Gandhi and other members of his party walked out of a meeting of the Parliamentary Committee on Defence on Wednesday, alleging that the chairman would not allow them to raise crucial issues of national security including the situation at the Line of Actual Control- a loosely demarcated boundary between India and China.

Sources told Sputnik that the panel chairman Jual Oram of the Bharatiya Janata Party urged Rahul Gandhi to discuss other defence-related issues instead of “matters of Chinese aggression” during the meeting. In a stormy session, Gandhi decided to leave the the high-level panel discussion before it had ended because the chairman ignored his demands for a statement from the political leadership about the current situation in Ladakh.

Earlier in the day, Gandhi had accused the government of weakening the country, saying India has never been so vulnerable. Citing a media report, the Waynad MP said that the Chinese People’s Liberation Army had once more crossed the Line of Actual Control in eastern Ladakh at several points, a claim rejected by the Indian army.

The monsoon session of Parliament is scheduled to start from 19 a July. It will be the first session since the second wave of COVID-19 struck.

Meanwhile, highly placed sources told Sputnik that Prime Minister Narendra Modi on Wednesday advised his Council of Ministers to come to the upcoming monsoon session well prepared and to be sure that they are well-versed with Parliamentary procedure - as, for many, it’s their first time as ministers. The government has called an all-party meeting on 18 July as it wants to receive parliamentary approval for 17 bills during the session.