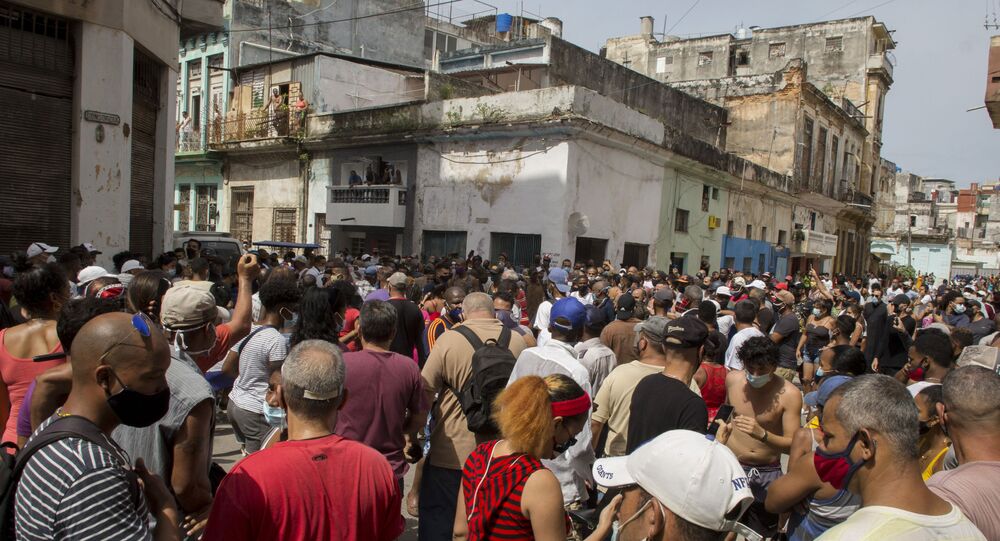 Biden Says US Stands With Cubans, Calls on Gov't to 'Serve Their Needs'

Thousands of protesters took to Cuba's streets on Sunday to vent their anger over the deteriorating economic conditions in the country that been worsened by the COVID-19 pandemic. Cuban President Miguel Diaz-Canel said the protests were a result of America's attempt "to create instability.”

US President Joe Biden signalled his support for the Cuban protesters on Monday, saying that Havana should respond to the demands of the people.

“We stand with the Cuban people and their clarion call for freedom and relief from the tragic grip of the pandemic and from the decades of repression and economic suffering to which they have been subjected by Cuba's authoritarian regime,” Biden said in a statement shared by the White House.

According to the US president "the Cuban regime" should "hear their people and serve their needs at this vital moment rather than enriching themselves.”

Biden also said that the people of Cuba were bravely defending their basic and universal rights, including to peacefully protest.

Large demonstrations were held in at least eight Cuban cities on Sunday, including Havana, with protesters decrying food and medical shortages, as well as rising prices. The COVID-19 pandemic has exasperated the country's poor economic conditions, with some demonstrators complaining of suffering from hunger.

According to reports from Reuters, chants for freedom were heard during the protests, with people calling for President Miguel Díaz-Canel to step down.

President Díaz-Canel on Monday blamed the worsening economy on US trade sanctions that have been in place for nearly 60 years. He earlier accused "the American empire" of instigating the large-scale protests with "anti-revolutionary mercenaries.”

"There is a group of people... hired by the US government, paid indirectly through US government agencies to organise these kinds of demonstrations," Díaz-Canel reiterated on Monday.

He has been calling on his supporters to take to the streets in response.