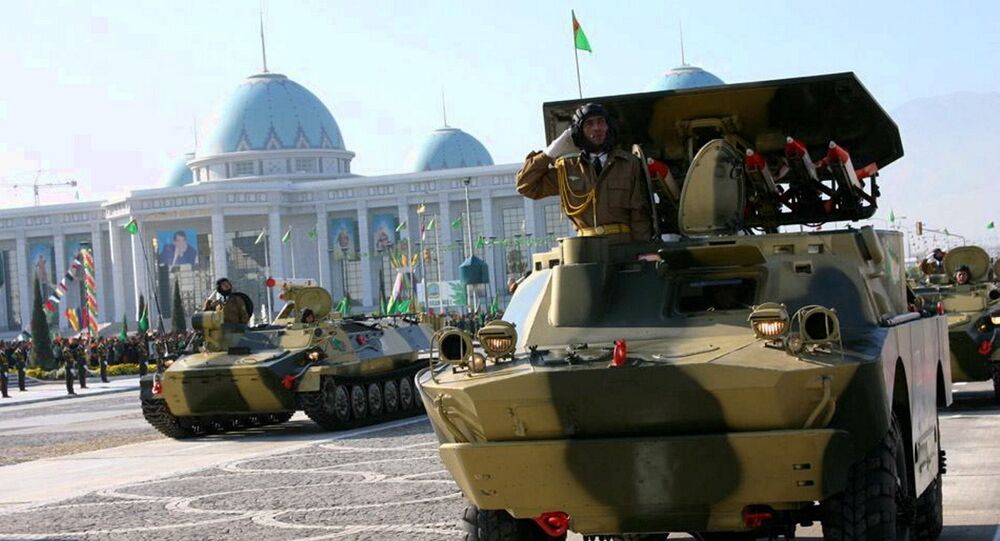 Nearly all of Afghanistan’s neighbours have been forced to beef up their border forces amid rapid Taliban advances in all directions and the Islamist group’s seizure of major border checkpoints. This week, the militants claimed that they were now in control of 85 percent of the country’s territory. The Kabul government has dismissed these claims.

Ashgabat has deployed an entire trainload of heavy military equipment to the town of Serhetabat, southeastern Turkmenistan near the border with Afghanistan, local media report, citing sources on the ground.

The equipment, said to include tanks, cannons, heavy trucks, and armoured personnel carriers, was reportedly brought to the area on Friday.

A source told Turkmen.news that combat alerts have been issued repeatedly in recent days among troops serving in detachments along the southern border amid sounds of explosions and gunfire across the frontier. Two explosions on the night of 8 July were said to be powerful enough to shake the ground on the Turkmeni side. Amid the chaos, residents of Serhetabat reported spotting a convoy of eight trucks carrying troops in full combat gear driving through the town.

On Thursday, another source told the same outlet that military officers serving in the region of Mary were evacuating their families from border areas, with the situation said to have become too “dangerous” to them. On Wednesday, Turkmenistani media also reported that a Ukrainian armed forces plane flying out of Ankara, Turkey had landed in the city of Mary. The plane’s contents remain a mystery and the aircraft disappeared from the FlightRadar tracking service following the flight.

Ashgabat closed the Akina border crossing between Turkmenistan and Afghanistan on Wednesday after the Taliban took control of the Afghan side and blocked the road at the checkpoint. The Akina crossing is expected to remain closed for at least one week. The Afghani government has vowed to restore control. The closure of the border has reportedly put Afghani communities in the border area at risk of starvation, with one resident in the border region saying food prices had doubled and the situation was “critical.”

Along with Turkmenistan, Afghanistan shares a border with the Central Asian nations of Uzbekistan and Tajikistan to its north, China to its east (a narrow, 76 km-long sliver of a boundary), Pakistan to its south, and Iran to its west.

Amid the deteriorating security situation in Afghanistan which has accompanied the US and NATO withdrawal, nearly all of these countries have beefed up security to prevent the spillover of unrest. In recent weeks, Central Asian media has reported on a series of incidents of Afghan Army soldiers fleeing en masse into Uzbekistan and Tajikistan in the north, and Iran in the west. On 22 June, for example, Tajik security officials reported that 134 servicemen retreated into Tajikistan, with border guards “guided by the principles of humanism and good neighbourliness” allowing them to enter. On 23 June, Uzbekistan’s Foreign Ministry reported on a similar incident, announcing that 53 Afghan border troops servicemen and local militiamen had crossed into Uzbekistan. However, these forces were turned back, with Uzbekistan warning that any further attempts to illegally enter Uzbek territory would be “strictly suppressed.”

© AP Photo / Vahid Salemi
Iran Assures Its Frontier With Afghanistan ‘Fully Secure’ as Taliban Seizes Main Border Crossing
Iran has similarly indicated this week that its border troops, the Army, and the Revolutionary Guard would “closely monitor the slightest movements near the borders” with Afghanistan and stop “the slightest illegal motion through these borders.” Iran halted all cross-border shipments through two major border checkpoints on Thursday amid the deterioration of the security situation on the Afghan side.

A Little Help From Their Friends

While Turkmenistan and Uzbekistan pursue a policy of military non-alignment, Tajikistan is allied to Russia, Belarus, Kazakhstan, Kyrgyzstan, and Armenia through the Collective Security Treaty Organisation, and Moscow have promised Dushanbe security assistance to help it maintain stability on its border with Afghanistan.

Tajikistan put its border guard forces on high alert last month, pointing to the “precarious situation in Afghanistan.” The Taliban seized the Sher Khan Bandar border crossing north of Kunduz this week, and provided assurances to the Tajik and Uzbek authorities that the routine work of border and customs would continue as before, with customs staff reportedly unharmed and instructed to continue working as normal.

On Wednesday, Tajikistan’s permanent representative to the CSTO revealed that some 1,500 Afghan troops fled into Tajikistan during the past two weeks. Meanwhile, on Friday, Moscow estimated that the Taliban now controls two-thirds of the 1,357 km-long Tajik-Afghan border. The Russian Foreign Ministry also warned that Russia and its CSTO allies would "act decisively" to prevent aggression and provocations in the border area, and indicated that the Russian military base in Dushanbe has the capacity to assist Tajik forces.

Meanwhile, the Taliban has been sending diplomatic delegations to neighbouring countries to assure them that the Islamist group does not seek to expand its control beyond the borders of Afghanistan. On Thursday, one such delegation arrived in Moscow for a two-day visit.

During this trip, the Taliban’s envoys conveyed that they do not seek to “dominate” the whole of Afghanistan, but to free the country from foreign occupation and set up a “free Islamic state system,” the contours of which would be established through negotiations. The group has also promised to work to tackle the heroin trade which boomed under the US occupation, guarantee the safety of commercial cargoes through its territories, and vowed not to allow provocations with their Central Asian neighbours. In addition, the envoys called on foreign humanitarian organisations to continue their work in Afghanistan, and reiterated that Daesh (ISIS)* would not be allowed to operate in areas they control.

© Sputnik / Екатерина Чеснокова
Taliban envoys in Moscow before the start of a press conference. 9 July, 2021.

It remains to be seen whether the highly decentralised group will be able to live up to its promises. In the meantime, many of its neighbours continue to prepare for the worst.