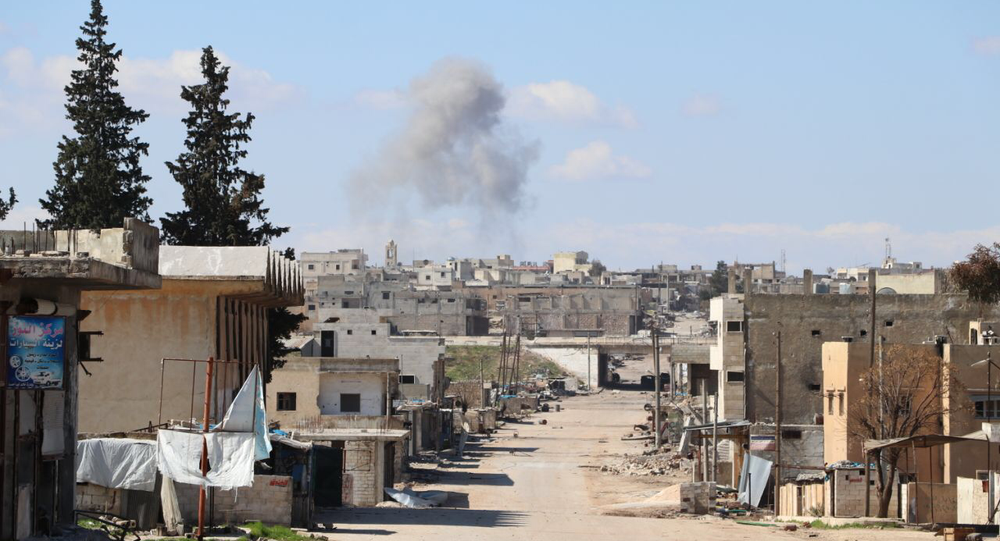 Syria destroyed its stocks of chemical weapons between 2013 and 2014 in an agreement facilitated by Russia and the United States and overseen by the Organisation for the Prohibition of Chemical Weapons. The US and its allies have since gone on to accuse Damascus of using its no-longer-existing chemwar stockpiles to target rebels and civilians.

Russia's permanent representative to the OPCW has dismissed as "absurd" claims made at the last OPCW meeting charging Syria with using chemical weapons in Saraqib "in retaliation for" the downing of a Russian airplane.

"During the last session of the executive council [of the OPCW], the Investigation and Identification Team presented its latest portion of its 'work', this time on the incident in Syrian Saraqib in 2018. The accusations against Damascus did not come as a surprise to anyone," ambassador Alexander Shulgin told Sputnik.

According to the official, the session of the OPCW held in The Hague 6-9 July included claims that the Syrian Air Force dropped cholrine on Saraqeb in 2018 response to the downing of a Russian aircraft. "The absurdity of these claims, like the absurdity of the entire so-called evidence package on which this pseudo-investigation is being built, does not stand up to scrutiny," Shulgin said.

In February 2018, a Russian Aerospace Forces Su-25SM jet was shot down by Nusra militants operating an anti-aircraft missile system in Idlib, northwest Syria. The jet's pilot, Roman Filipov, ejected from the plane before it crashed, but landed in terrorist-controlled territory. Surrounded by militants, Filipov blew himself up with a grenade. The incident was caught on camera and went viral. Russia and Syria responded with intense air and Kailbr missile strikes on jihadist positions in the area.

In a report published in April 2021, the OPCW said it had "good reason" to suspect that the Syrian Air Force dropped a chlorine bomb on Sarakib a day after Filipov was shot down, with 12 people reportedly injured in the incident. Moscow blasted the report, saying no factual evidence had been provided, and that similar claims of Syrian government chemical attacks had been refuted repeatedly in the past.

Russia and Syria have regularly accused the OPCW of bias in its investigations of incident in the Syrian Arab Republic, and questioned the conclusions made by its technical secretariat, which have on multiple occasions differed drastically from those of its own investigators.

On Thursday, Rania al-Rifai, Syria's representative to the OPCW, accused the US and its allies of turning the watchdog into a political tool to put pressure on Damascus. Certain countries, she suggested, have used the OPCW to advance their agendas, and to implement plots hatched by terror groups.

© Sputnik / Russian Defence Ministry
Russian Military: Militants, 'White Helmets' Plotting Staged Chemical Attack in Idlib
Damascus has spent the past decade insisting that it has never used chemical weapons against civilians or terrorists, and stressing that the country's entire chemical weapons arsenal was destroyed in the mid-2010s under the OPCW's watchful eye. In 2017, after the US used alleged chemical attacks as a pretext to launch strikes against Syria, President Bashar Assad asked what kind of logic he would have to operate under to attack his own people with chemical weapons, particularly after beating back rebels and jihadists into a few small terrorist-controlled enclaves using conventional forces. "Let's suppose we have this arsenal, and let's suppose we have the will to use it. Why didn't we use it when we were retreating and the terrorists were advancing?" Assad asked in one interview.

Earlier this year, Canadian journalist Aaron Mate debunked the OPCW's Syria investigations at the United Nations, blasting the chemical weapons watchdog over its refusal to address the concerns of whistleblowers from within the organisation who challenged its Syria claims. At least four whistleblowers have now come forward from within the OPCW to challenge the agency's official conclusions on the alleged chemical attack in Douma, Syria in 2018, which served as justification for the US, British and French air and cruise missile strikes on the Middle Eastern nation in April of that year.

In a related development, Russia and the United States introduced Friday for the first time ever a joint resolution on Syria's cross-border humanitarian assistance.

Commenting on this development, Russian Ambassador to the United Nations Vasily Nebenzya said it was satisfying "that in spite of all the difficulties and problems, we managed to find an important point of convergence no such a complex issue as a cross border mechanism to deliver humanitarian assistance in Syria."

© Sputnik / Vladimir Astapkovich
UNHCR Asks Russia to Continue Creating Conditions for Syrians to Return Home
"Today, we are witnessing a historic moment: for the first time, Russia and the United States not only managed to find an agreement but to present a joint text, which all our colleagues in the Council supported. We expect that a similar kind of day would become a turning point not only for Syria but for the Middle East as a whole," the envoy added.

The adapted resolution authorises aid deliveries through the Bab al-Hawa crossing between Syria and Turkey for six months, with an additional six-month extension possible depending on the UN secretary-general's recommendations.