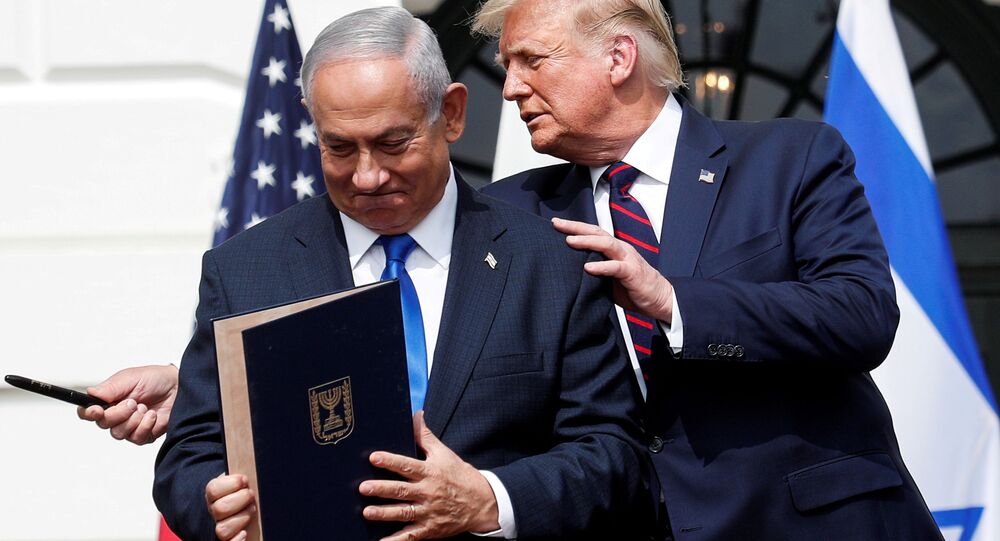 Benjamin Netanyahu was one of the last world leaders to congratulate Joe Biden after the US media called the 3 November 2020 presidential election for the Democratic hopeful.

A copy of the book titled "Landslide: The Final Days of the Trump Presidency" was obtained by the news outlet Forward, which quoted author Michael Wolff as saying that Netanyahu's congratulations were "startling to [the 45th president's] aides, however much they were anticipating an eruption, that Trump's wrath fell on Bibi Netanyahu".

Wolff claimed the then-POTUS told his aides that Netanyahu's tweet came before "the ink was dry" and was the "ultimate betrayal".

"As in all Trump reactions, a variety of grievances welled up here. There was his belief that he had singularly done more for Israel than any American president — and that therefore he was owed. And now sold out", the journalist wrote in the book, due to be published on 13 July.

Separately, Wolff mentioned Trump's alleged frustration over the lack of Jewish support in the 3 November 2020 presidential election. According to the author, the 45th president conflated his dismay with Netanyahu "with his own increasing anger at his failure to much improve his standing among Jewish voters, even with what he regarded as the quid pro quo nature of his support of Israel".

Congratulations @JoeBiden and @KamalaHarris. Joe, we’ve had a long & warm personal relationship for nearly 40 years, and I know you as a great friend of Israel. I look forward to working with both of you to further strengthen the special alliance between the U.S. and Israel.

Trump's purported anger came after the now former Israeli prime minister tweeted his congratulations to Biden and Kamala Harris, stressing that he was looking forward to working with them "to further strengthen the special alliance between the US and Israel".

Notably, the tweet was posted more than 12 hours after major US news networks projected election victory for Biden, meaning that Netanyahu was actually one of the last world leaders to extend his congratulations to the 46th president.

In a subsequent tweet, Netanyahu thanked Trump for his "friendship" with the Jewish state and for "recognising Jerusalem and the Golan [Heights], for standing up to Iran, for the historic peace accords [on the Israel-UAE normalisation] and for bringing the American-Israeli alliance to unprecedented heights".

© AFP 2021 / DEBBIE HILL
Biden Reportedly Delivers Firmer Message to Netanyahu in Private Call Than in Public Statement
Trump refused to concede defeat, making claims of election fraud and pledging to take his case to the courts. The developments were followed by scores of Trump supporters storming the US Capitol building in early January 2021 in a bid to stop the certification of Biden's election victory by Congress.

In a separate development in June, Yair Lapid, the leader of Israel's largest opposition party, Yesh Atid, succeeded in forming a government that has installed Naftali Bennett, the leader of the conservative party Yamina, as the new Israeli prime minister, ending Netanyahu's 12-year tenure.