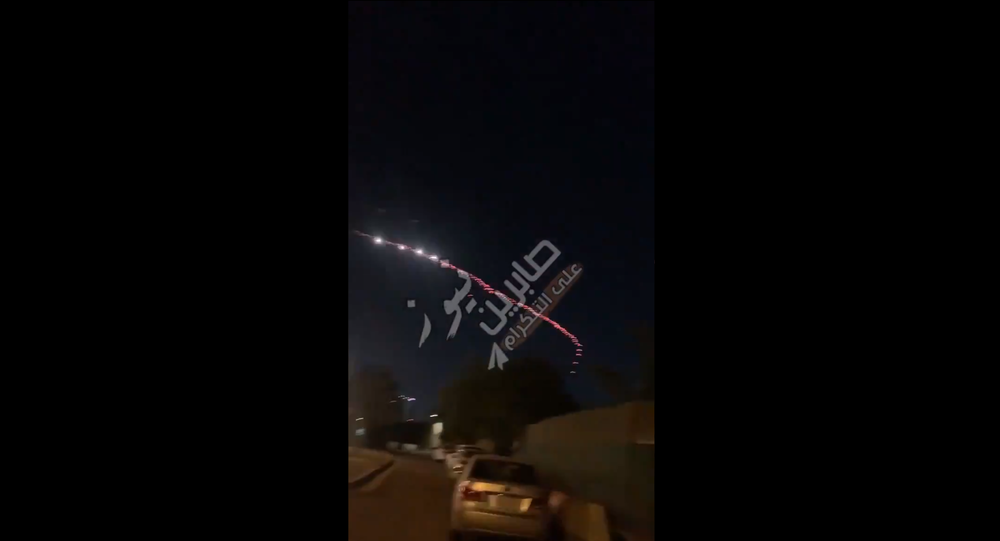 Earlier this week, US forces stationed in the Iraqi capital downed what was described as an explosive-laden drone above the embassy of the United States of America in Baghdad.

Early eyewitness reports from the Baghdad area detailed that a thunderous sound, akin to a building collapse, shook the inside of the Green Zone early Thursday morning.

"We are aware of these reports. As this is an ongoing situation, we have no further details at this time", a spokesperson for the US-led coalition told Sputnik, referring to the emerging reports.

Government agencies, as well as foreign diplomatic missions, are located in the impacted area of the Green Zone.

Footage purportedly depicting the scene has since been uploaded to Twitter, showing the missile defence system engaging the perceived threat.

At least two rockets were downed by nearby missile defence systems, according to Iraqi security sources who spoke with Reuters. One rocket was diverted by the embassy's defence system, while the other rocket landed outside of the Green Zone.

Earlier, unconfirmed reports claimed the attack was carried out by an unmanned aerial vehicle.

Sirens can be overheard in additional footage recorded near the US mission.

Sirens sounded from inside the headquarters of the US embassy in the Green Zone in central Baghdad.-AzadNews pic.twitter.com/MBfnseQadM

The Thursday morning activation of the air defence systems comes alongside a series of sophisticated drone and aerial attacks that US forces have linked to Iran-backed groups within Iraq.

On Monday, an armed drone was shot down within the vicinity of the US Embassy in Baghdad's Green Zone. The downing came hours after a same-day attack targeted the Ain al-Asad base, a western Iraq military installation that presently houses US troops.

Offensive attacks against US forces and the embassy have seemingly increased since US President Joe Biden ordered so-called "defensive precision airstrikes" against Iran-backed militants near the Syrian-Iraqi border late last month.

Abu Alaa al-Walae, commander of the Iran-backed group Kataib Sayyid al-Shuhada, teased to the Associated Press on Monday that his forces may utilise drones to carry out retaliatory operations for the Biden-ordered strike.

"We want an operation that befits those martyrs", al-Walae told the outlet, speaking of the four militiamen killed in the American "defensive" strike.

"We want it to be an operation in which everyone says they have taken revenge on the Americans", the commander contended. "It will be a qualitative operation (that could come) from the air, the sea, along Iraq's border, in the region or anywhere. It's an open war".