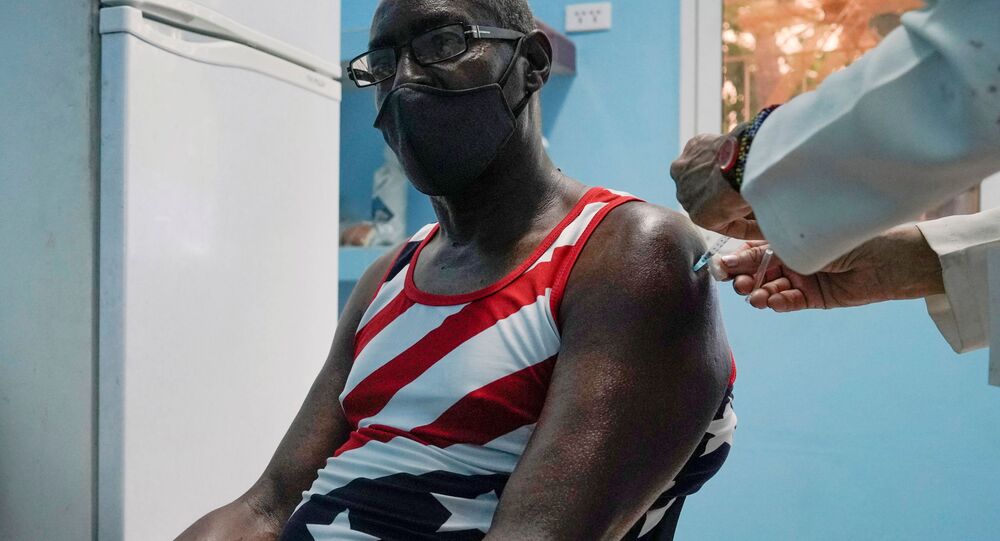 Pedroso said Cuba’s health sector lost more than $198.3 million between April and December of 2020 due to the United States economic blockade against his nation.

"During the period under review, the country was unable to obtain a total of 32 pieces of equipment and supplies, related to the production of vaccines candidates against COVID-19 or the conduct of stages necessary for the completion of the clinical trials, including equipment for the purification of the vaccines candidate, accessories for production equipment, filtration tanks, and capsules, potassium chloride solution, thimerosal, bags and reagents", Pedroso said.

The ambassador explained that Cuba’s health industry has been significantly challenged by shortages of essential products as the country faces difficulties in procuring supplies needed for drug manufacturing.

Under the so-called Cuban Democracy Act of 1992, foreign-based subsidiaries of US companies are prohibited from selling their products to Cuba.

Due to the US restrictions, Cuba had to resort to other intermediaries during the pandemic, leading to increase in prices of 60 percent as it was impossible to sign direct contract with the manufacturer, Pedroso said.

"This had an impact on the work of several institutions in the biopharmaceutical sector in Cuba, including the Centre for Genetic Engineering and Biotechnology [and] the Finlay Vaccine Institute,… directly involved in the country’s efforts to tackle the pandemic", he said.

Despite the economic blockade, Cuba has supported some 40 countries in their COIVD-19 response and currently has five vaccine candidates for development, Pedroso added.

Pedroso argued that the lifting of the US economic blockade could allow Havana to modernise its infrastructure and switch to renewable energy in less than five years.

Pedroso noted the losses Cuba has sustained during nearly six decades of the United States imposing the economic embargo amount to more than $147,8 million.

“If Cuba had the payment capacity it lost to the embargo, in less than five years, the country could go a long way towards bringing much of its infrastructure up to date and could, in particular, change the national energy mix in favour of renewable energy sources”, Pedroso said.

If the amount Cuba lost were available, it would also strengthen the confidence of foreign investors and creditors as well as increase the country’s access to financial markets, Pedroso pointed out.

"Under the present conditions, the embargo represents a huge burden for the Cuban population and economy", he said.

In June, the Central Bank of Cuba moved to temporarily suspend cash deposits made in US dollars as a necessary step as the country’s ability to deposit US dollar bills in banks abroad has been restricted due to the long-running US trade embargo.

The former administration of US President Donald Trump intensified the trade embargo in place since 1962 by adding 243 new coercive measures against the Cuban government over four years that remain in effect to this day.

The new report by the US State Department alleging that Havana has profited from exploiting its citizens through forced labour abroad is dishonest ans represents offence to Cuba's health workers, Pedroso stressed.

Last week, US Secretary of State Antony Blinken presented a report claiming that Cuba, among other nations, does not do enough to combat trafficking in persons. In particular, the report accused Cuba of running forced labour export programs, specifically its foreign medical missions programme.

"State Secretary Blinken's trafficking in persons allegations [versus] Cuba are a new repeated chapter of aggression against our people. It is also a dishonest and an offence to Cuba's health staff", Pedroso said. "They are a brazen repetition of the lies fabricated under the Trump administration to justify the aggression. They are evidence of political corruption."

The former administration of US President Donald Trump has previously raised the labour export programmes issue. The allegations were repeatedly refuted by Cuba, which has sent 57 medical teams to support 40 countries during the coronavirus pandemic.

The inclusion of Cuba in the annual "Trafficking in Persons Report" and placing it in Tier 3 - the worst category - could lead to the introduction of new sanctions and restrictions on access to international assistance.

The restrictive measures against Cuba imposed by the former Trump administration have obstructed the arrival of humanitarian aid in the island nation during the coronavirus pandemic, Pedroso told Sputnik.

Over the last four years, the US government added 243 new economic sanctions to toughen the embargo on Cuba that has been in place for almost 60 years.

"The measures have repeatedly hampered the arrival of humanitarian aid in the country which, in the context of addressing the pandemic, is immoral and unjustifiable and highlights the blockade's criminal nature", Pedroso said.

The ambassador emphasised that the new restrictive measures have magnified the many challenges Cuba faces brought about by the coronavirus pandemic and its socio-economic, health and financial impacts.

"Think about how much [Cuba] could be advanced, if just some of these measures are removed, or if Cuba is removed from the US State Department's unilateral list of countries that allegedly sponsor terrorism", Pedroso said.

US restrictions on trade with Cuba date back to the island nation's communist revolution in the late 1950s and involve least a half dozen different US laws. President Barack Obama took steps to normalise bilateral relations, but many of those steps were reversed by the former administration of President Donald Trump.

Current President Joe Biden has promised that he would return Obama's policy on Cuba but has yet to reverse the previous administration's steps after nearly six months in office.

On 23 June, the United States voted against a UN General Assembly resolution condemning the embargo on Cuba that was adopted by the overwhelming majority of 184 other nations.