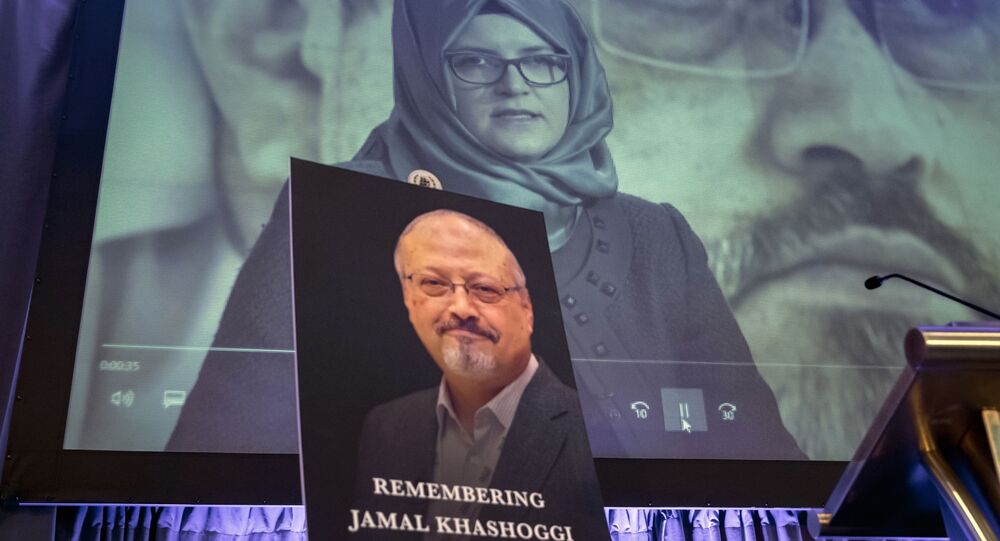 'A Tale of Two Women': Jamal Khashoggi Reportedly Led Secret Life Before He Was Murdered

Jamal Khashoggi went missing in October 2018 after entering the Saudi Consulate General in Istanbul. Initially, Riyadh denied any knowledge of The Washington Post columnist's fate, but later admitted that he was killed and dismembered in a rogue operation while inside the premises.

Murdered Saudi journalist Jamal Khashoggi had a fiancée in Istanbul and a "secret wife" in the US shortly before he was killed in 2018, a new investigative podcast has revealed.

In an interview with the Yahoo News podcast "Conspiracyland", The Washington Post columnist's fiancée Hatice Cengiz claimed that she had no idea about the journalist's connection with Egyptian flight attendant Hanan El-Atr.

According to Cengiz, she was not in the know about Khashoggi having secretly married El-Atr in Virginia either, something that took place four months before he went missing after entering the Saudi Consulate General in Istanbul in early October to get divorce records proving he was no longer married to his wife in Saudi Arabia.

"He told me when he proposed to me, there is no one in his life", Cengiz told the podcast, before recalling that Khashoggi lied not only to her but even her father when he started questioning the journalist about his intentions and his background.

"My father knows very well the Arabs get married more than [once] at the same time. And then he asked him, 'Are you sure you're not married?' It's a little bit of a sensitive point for my father", Cengiz said, adding that her fiancé responded, "I'm not married. I'm divorced".

As far as El-Atr is concerned, she told the podcast that they had met while Khashoggi was in Dubai for a conference in 2009. The two swapped phone numbers and they kept in touch, exchanging "funny videos and messages about their favourite lines of Arabic poetry". They became "something of an item" in early 2018, when she began to visit the journalist at his home in Washington, DC, while making twice-monthly trips there for work.

Shortly after, Khashoggi proposed to her, texting El-Atr to assure her that she "will be the happiest bride".

"I throw myself at you, kiss you, and delight you. I take out a watch or a necklace or perfume I bought for you to delight you", the message read, according to the podcast episode titled, "A Tale of Two Women".

On 2 June 2018, the two married in line with an Islamic ceremony performed by an imam at a northern Virginia mosque.  They, however, never got a civil marriage license, which meant that the alliance was not legally binding, the podcast argued.

According to El-Atr, that spring and summer Khashoggi started making frequent flights to Istanbul, texting her that his "sister is here in Istanbul" to explain the trips he made to secretly meet Cengiz.

"And he proposed marriage again — this time to Cengiz", the podcast claims, adding that the columnist told her "nothing" about El-Atr.

The podcast also argued that Khashoggi had never mentioned his marriage to Atr to many of his closest friends at the time, which signalled his drive to be secretive about much of his life.

Mohammed Soltan, the Egyptian American human rights activist who collaborated with Khashoggi, described the journalist as a person who "compartmentalised", telling "different people certain things about his life".

"He gave nobody a full view of his life. He kept all of it with himself, and he gave different people the things that they needed to know. So, I had no idea about Hanan", Soltan told the podcast.

Khashoggi entered the Consulate General of Saudi Arabia in Turkey on 2 October 2018 to obtain a divorce certificate for his oncoming marriage, but never exited the building.

© AP Photo / Virginia Mayo
Five People Sentenced to Death for Khashoggi's Murder - Saudi Arabia's Public Prosecutor
According to the prosecution, he was murdered and his corpse was dismembered. The Saudi government denied any connection of the royal family to the murder and launched its own internal investigation which located several suspects who were detained to be put on trial.

The trial kicked off in January 2019 in Saudi Arabia, after 18 people were arrested in connection with Khashoggi's death. Five suspects were sentenced to death and three others to long prison terms, but a Saudi court later commuted the death sentences to several years in prison.