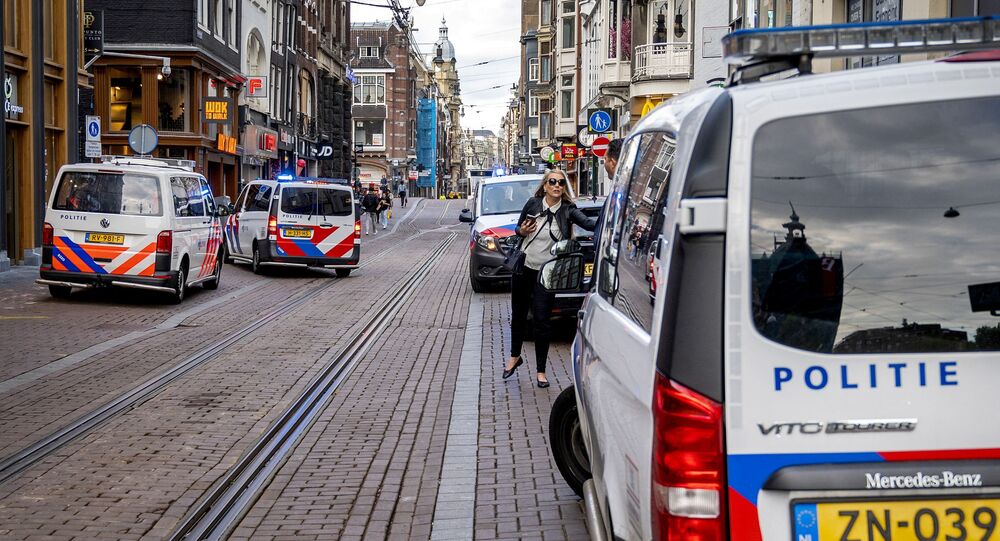 According to Dutch media, citing sources, the journalist was shot five times when he left the RTL studio, where he was invited to participate in a TV show.

Three suspects are now in custody after famed crime journalist Peter R de Vries was shot in the head at close range on a street in Amsterdam on Tuesday, police have confirmed.

"Peter R de Vries was shot on the Lange Leidsedwarsstraat tonight. He was taken to hospital with serious injuries. The police have launched a large-scale investigation," local authorities said via Twitter.

The 64-year-old crime journalist was attacked by the unknown gunman at Leidseplein Square around 7:30 p.m. local time.

Video evidence, as well as eyewitness statements, were taken at the scene by law enforcement officials.

Eva Plevier
Police officers talk to a person as they stand guard in the area where Dutch celebrity crime reporter Peter R. de Vries, known for his reporting on some of the most renowned criminals in the Netherlands, was reportedly shot and seriously injured, in Amsterdam, Netherlands, July 6, 2021

"At this point, all we know is that he is seriously injured and is fighting for his life," said Amsterdam Mayor Femke Halsema. "Our hearts and condolences go out to his family, relatives and friends."

"It was an attack on a courageous journalist and also an attack on the free press that is so critical to our democracy," Rutte declared. "We are praying that he will survive."

De Vries, famous for his independent crime journalism, asserted in 2019 that he was still on the hit list of suspected organized crime boss Ridouan Taghi, who was arrested in Dubai later that year and remains in a maximum-security prison in the southern Netherlands town of Vught.

"The only thing I can do now is to publicize this," De Vries told the Telegraaf.

At the time, the crime journalist theorized that then-fugitive Taghi - who has been linked to a number of assassinations - wanted to murder him over statements.

De Vries' allegations prompted the suspected crime boss to issue a rebuttal, claiming that authorities and the judiciary system were "lying."

"As a boy I have always been very interested in watching your TV program," Taghi asserted in May 2019, referring to "Peter R. de Vries: Crime Reporter" ("Peter R. de Vries, misdaadverslaggever"), De Vries' investigative television program that focused on high-profile criminals. The show ran from 1995 until 2012.

"I am relieved and I tend to believe this," the journalist said in his response, months before Taghi was arrested.

Three People, Including Suspected Gunman, Shot in US' Winthrop After Truck Incident