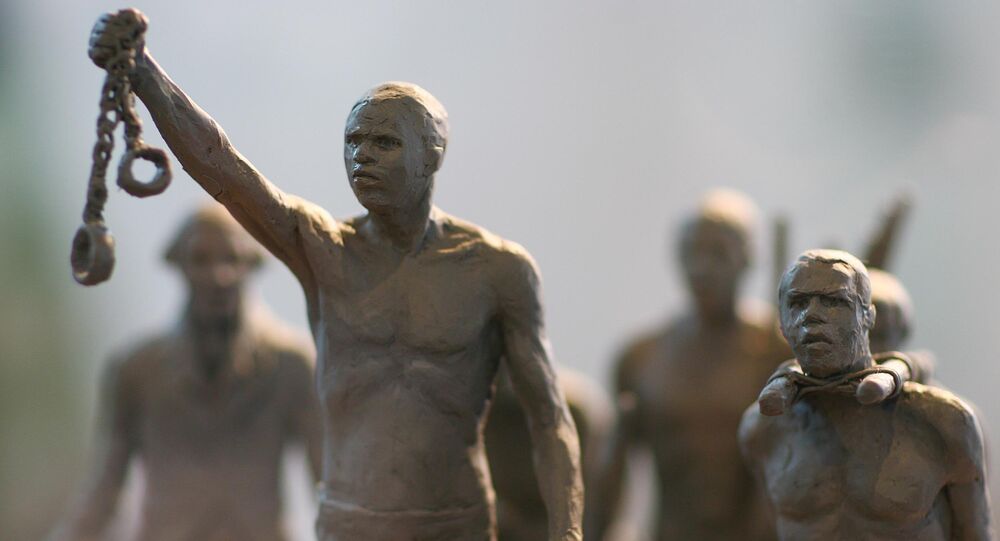 Sorry is the Hardest Word: Why Dutch are Not Alone in Refusing to Apologise for the Slave Trade

An independent panel in the Netherlands has told the government it should apologise for the Dutch role in the transatlantic slave trade. But what would be the implications if it did, and what about all the other nations involved in the slave trade?

Dutch Prime Minister Mark Rutte set up an independent panel last year - in the wake of the death of George Floyd and under pressure from the Black Lives Matter campaign - to look into the role played in the slave trade by the Netherlands.

After publishing the report on 1 July, the chair of the panel, Dagmar Oudshoorn said: "History cannot be turned back. However it is possible to state the intention that this historical injustice...whose ill consequences are still being felt today, be corrected as far as is possible, to make that the starting point of policy".

The mayor of Amsterdam on Thursday issued an apology for the city's role in the slave trade which enriched the Dutch capital during colonial times. https://t.co/7n2MIiNVzq

​On the same day, Amsterdam Mayor Femke Halsema, said: "On behalf of the city, I issue an apology for the Amsterdam city council's active involvement in the commercial system of colonial slavery and global trade of people reduced to slavery".

Amsterdam's bankers and merchants were key to the slave trade in Dutch colonies such as Suriname, Curacao, and Aruba.

The panel laid out a set of recommendations, including officially recognizing the slave trade under Dutch authorities as a crime against humanity & issuing a formal apology. It noted that the public lacked knowledge of the colonial past and recommended it be taught in schools. https://t.co/VLqx05c14o

​But Mr Rutte has said his government will not apologise for slavery because he did not want to divide public opinion by passing judgement on Dutch history.

The Dutch West India Company operated a chain of fortresses in what is now Ghana and shipped around 500,000 African slaves to the Caribbean and Brazil.

The Netherlands banned slavery in all its overseas colonies, including Suriname, in 1863.

But what about the other nations involved in slavery?

The British Empire - or England as it was until 1707 - did not invent slavery but it was responsible for turning it into a huge wealth-creating industry.

From the middle of the 17th century until the abolition of the slave trade in 1807, English ships were exporting iron goods, guns, cloth, and other manufactured products like glass beads to Africa where they would be used to buy slaves from local African chiefs.

The slaves would then be put in chains and transported across the Atlantic to the Caribbean or to the southern states of what would become the United States, where those that survived would be put to work on sugar, tobacco, or cotton plantations.

The crops would then be sent back to Britain on the same ships and the triangular trade would go on.

Merchants and bankers in Bristol, Liverpool, and London played a leading role in the slave trade but the monarchy, the government, and the church all benefited from it financially and saw little unethical about it until independent MP William Wilberforce embarked on a campaign to end it.

In recent years, the Bank of England and the Church of England have both apologised for the role they played in the slave trade and there has been much debate in cities like Bristol about renaming venues and removing statues of slave merchants like Edward Colston who also happened to be philanthropists.

This memorial to Olaudah Equiano, a slave who bought his freedom and became a campaigner for the abolition of the slave trade, is in St Margaret's Church. He was baptised here when he was twelve.#ShakespeareSunday #Liberty pic.twitter.com/G6EaSuemjN

​In June of last year, the Lloyd's of London insurance market apologised for its "shameful" role in financing the slave trade and promised to fund job opportunities for black people.

In 2007, then-Prime Minister Tony Blair said during a visit to Ghana: "I have said we are sorry and I say it again …It is important to remember what happened in the past, to condemn it and say why it was entirely unacceptable".

But Hilary Beckles, chairman of a Reparations Commission set up by Jamaica and several other Caribbean countries, told Reuters: "It is not enough to say sorry. We are not asking for anything as mendicant as handing out cheques to people on street corners. The issue of money is secondary, but in this instance the moral discharge of one's duty does require in a market economy that you contribute towards development".

Spain bears a heavy responsibility for the slave trade as it was the Spanish monarchy which funded Christopher Columbus' expedition in 1492 and then followed up shortly afterwards by sending a fleet of conquistadors to crush the Aztec and Inca empires and subjugate indigenous people from Mexico to Peru and Cuba to Argentina.

The Spanish were the first to bring slaves to Jamaica - which England conquered in 1655 and turned into a thriving slave-owning economy - and they also exploited the agricultural wealth of Venezuela and Colombia by using African slaves.

When Simon Bolivar - who himself owned slaves - liberated Venezuela and Colombia in the 1820s he failed to persuade local plantation owners to free their slaves and slavery was only abolished in 1852.

Slavery continued in the Spanish colony of Cuba until 1886, only 10 years before the US ousted the Spaniards and began their own period of neo-colonial rule.

The Spanish government has never formally apologised for enslaving millions of people in Latin America, or for the atrocities committed by the conquistadors, who often enslaved indigenous people who refused to convert to Christianity.

The closest it came was in 2001 when then-Labour and Social Affairs Minister Juan Carlos Aparicio, said: "We profoundly regret the injustices of the past".

During the 18th century, France competed with Britain, Portugal, and Spain when it came to building empires and dominating trade and it was not shy in getting involved in the slave trade.

France took almost 1.4 million African slaves to the Caribbean to work on plantations in Guiana, Martinique, Guadeloupe, and the western half of the island of Saint Domingue - now known as Haiti - which would become a major sugar exporter and the jewel in the French empire.

When Toussaint L'Ouverture led a successful slave revolt in Haiti, Napoleon Bonaparte was so affronted that he ordered the island be recaptured and slavery reimposed.

But the campaign was a bloody failure and Haiti became the first black republic and abolished slavery in 1805.

France finally abolished slavery in its colonies in 1848.

In 2006, then-President Jacques Chirac oversaw a ceremony which commemorated the "indelible stain" of slavery in French history, but France has never formally apologised.

Portugal was one of the first countries to see the potential for profits in slavery.

Only 12 months after Columbus discovered the Americas, the King of Portugal had claimed what is now Brazil and this was accepted by a papal bull and then the Treaty of Tordesillas.

By the 16th century, Portugal, having pioneered slave plantations on Madeira and São Tomé, introduced the slave trade to Brazil and began bringing in hundreds of thousands of slaves from what is now Angola, Mozambique, and the Democratic Republic of Congo to cut sugar cane on "engenhos" in Brazil.

Brazil became independent from Portugal in 1822, but the economy was built on slavery and it was not abolished until 1888.

It is estimated that around five million enslaved people were brought from Africa to Brazil between 1501 and 1866.

Portugual has never formally apologised for its role in the slave trade, but in 2017 President Marcelo Rebelo de Sousa visited Senegal and said he recognised the "injustice of slavery".

The southern states - Georgia, Alabama, Mississippi, Louisiana, Virginia, and North and South Carolina - inherited slavery when the US threw off the shackles of British control in the late 18th century.

There is even a theory that the war of independence was begun because American slave owners feared the British Empire was about to end the slave trade.

Slavery remained integral to the US economy, especially in the south, until the 1860s when the Civil War tore the country apart.

© REUTERS / KEN CEDENO
Alison Lane gestures as she celebrates Juneteenth, which commemorates the end of slavery in Texas, two years after the 1863 Emancipation Proclamation freed slaves elsewhere in the United States, in Washington, D.C. U.S., June 19, 2021.

Abraham Lincoln finally freed the slaves and defeated the Confederacy in 1865.

In July 2008, the US House of Representatives passed a resolution apologising for slavery and for the Jim Crow laws which discriminated against blacks for decades after the abolition of slavery.

Nine US states have also made official apologies for enslaving Africans and their descendants.

Possibly the most politically awkward subject is the culpability of various African nations - or their ancestors - for enslaving other Africans in the first place.

Toyin Falola, a Nigerian professor of African studies at the University of Texas, told The Wall Street Journal in 2019: "The organisation of the slave trade was structured to have the Europeans stay along the coast lines, relying on African middlemen and merchants to bring the slaves to them. The Europeans couldn't have gone into the interior to get the slaves themselves".

The author of the article, Adaobi Tricia Nwaubani, wrote about her great-grandfather, a chief in the Igbo tribe of eastern Nigeria, who had sold slaves in the 19th century.