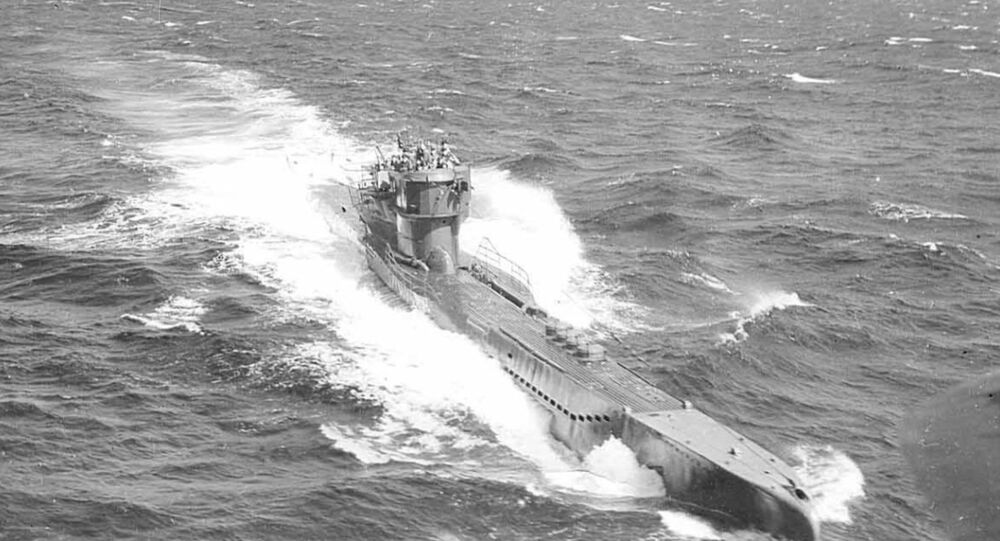 US Arctic Convoy War Veteran: 'We Felt God Will Save Us When Nazi Torpedoes Hit'

WASHINGTON (Sputnik) - The German military unleashed horrific attacks on the Arctic convoy known as PQ17, tasked by the Allies with delivering vital supplies to the Soviet Union during World War II, but the convoy succeeded in completing the mission, US war veteran and convoy sailor James Baker North said.

"I was never afraid. I was always feeling that God will save me," Baker said in an interview ahead of the 79th anniversary of the PQ17 mission.

In late June of 1942, the Allies directed 35 ships to supply more than 60,000 tons of much needed war supplies to the Soviet Union. However, the Nazi German military located the convoy on 1 July and started relentless attacks by utilizing its air force and submarines that resulted in the sinking of 24 ships.

"All of the experiences of the 11 [surviving] ships were providential," North said, relaying the belief of many sailors that providence itself allowed them to successfully complete the mission.

The losses sustained during the PQ17 convoy operation are considered by many historians to be the result of one of the most tragic blunders during World War II. Namely, British Royal Navy commanding officer Dudley Pound acted on information that the super-battleship Tirpitz was moving in to intercept the PQ17 and ordered the warships guarding the convoy to leave. Pound also directed the merchant vessels to scatter.

While the super-battleship Tirpiz never appeared, the German military began sustained attacks on July 4 to terrorize and destroy the unprotected convoy.

Enlisted to join the PQ17 fleet

North said he was 19-years-old when he enlisted as a sailor to serve in the merchant ship Troubadour that was assigned shortly thereafter to join the PQ17 convoy.

"I had absolutely no experience, but they had nobody to send and I was offered an extra $500. I was a farm boy and it sounded like a lot of money to me," he said.

North said he later used the money to buy a farm in the US state of Arkansas where he met his future wife to whom he has been married to for more than 75 years.

The war veteran explained that the Troubadour was carrying tanks and ammunition and there was so much cargo that it took months to unload it once the vessel reached the Soviet port of Molotovsk (now Severodvinsk).

North emphasized that on their way to Soviet ports such as Arkhangelsk, the convoy was subjected to a "real Hell" from Nazi attacks.

"It was Hell up there to watch what was going on and my ship not get it. I kept on saying ‘Oh my God,’" he said.

North noted that the British naval ships left the convoy without providing any explanation why they did so, contributing to a sense of abandonment among the convoy’s sailors.

"All we knew was that the British were being told to disperse and everybody was supposed to spread out. We did not know why. We felt abandoned," he said.

North said it was symbolic that the German military began attacking the PQ17 convoy on 4 July - the US Independence Day - and important date to all Americans. However, he said that day in 1942 was a bad day for the convoy’s sailors given how many ships were sunk and people were lost.

"Of the 11 ships that made it to Russia, one was so badly damaged that they did not try sail at all after the mission," he said. "Probably it was a miracle, but the Troubadour was not damaged in this hell. One torpedo hit the vessel but did not destroy it."

North acknowledged that watching the torpedo hit the Troubadour was perhaps the most remarkable moment for him during the war.

"We all saw the torpedo coming. It glanced off of the ship and continued on. It went around the ship when it glanced off and started coming back. A naval officer on our ship sank it with the machine gun," he said.

Hiding In The Arctic Ice

North explained that Troubadour’s captain was a Norwegian who knew to deceive the pursuing German forces and hide the ship in the Arctic. The captain decided to "go to the ice" and that way reach the Soviet islands of Novaya Zemlya.

"We spent three or four days there. We just kept on painting our ship white," he said, adding that following orders and performing all the given tasks contributed to lessen the pressure of being in a dangerous situation.

The Troubadour then continued on its way to the Soviet mainland and after arriving at the port of Molotovsk was greeted by two Soviet officials who provided the US sailors a sum of rubles to spend during their stay in the Soviet Union, North said.

"These men told us a place where we could buy food and drinks. Everybody left the ship and got something to drink," he said.

North said he received 60 rubles in total and used some to try vodka for the first time in his life as well as purchase brown bread and refreshments.

"We were there two months, so I learned quite a lot of the Russian language," he said recalling several words in Russian.

However, North acknowledged that the US sailors had not much chance to establish contacts with the local Russians given that they lived in a separate campus and due to concerns for their safety.

North recalled how he came to a dance hall one day to mingle with the locals but spent the whole evening talking with a Jewish boy whose parents had been evacuated to Molotovsk from the another city.

Enduring More Attacks on The Way Back

After their stay in Russia following the delivery of the cargo, eight out of the 11 ships left Molotovsk, North said.

The Troubadour, the oldest ship in the flotilla that had to use all of its coal to manoeuvre and reach its destinations, headed to Novaya Zemlya as per its captain’s orders, he noted. However, North added that the danger of German attacks was still very much present on the way to Novaya Zemlya and beyond.

"That is where another torpedo missed us very closely," North said. "We could see it go by. We went to Novaya Zemlya, got a good coal and them were able to make it back."

An alleviating circumstance in the otherwise dangerous situation was the weather, which was so bad that it actually prevented German submarines from locating the convoy on its way to Iceland and thus resulted in no casualties, he said.

The veteran pointed out that after returning back, he made several trips with merchant convoys to different countries, but then got married and settled down.

North emphasized that the PQ17 convoy became a very significant part of his life despite not discussing his experiences with others, even with his wife.

"I did not talk too much with my wife about that as well," he said, adding that in the emotionally charged war years he did not condemn the British officers who left the merchant ships undefended nor the Germans who sought to disrupt and destroy the PQ17 convoy.

"I read quite a bit about it and I understand the anger that others may have felt. But personally, I have no problem to shake the hands of those British officers and no problem shaking the hands of the Germans, or the Japanese. I do not hold hatred from the war," North concluded.