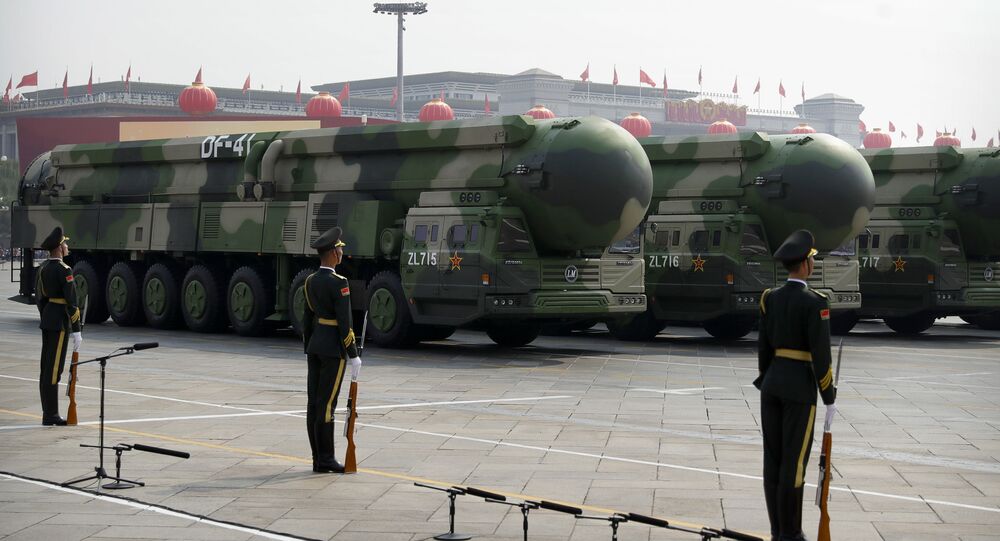 Chinese President Xi Jinping cautioned potential adversaries in an unusually confrontational manner on Thursday, warning that “foreign forces” that anyone attempting to “bully” the country would “have their heads bashed bloody against the Great Wall of steel forged by over 1.4 billion Chinese people,” according to one translation of his remarks.

Former Trump-era secretary of state and ex-CIA chief Mike Pompeo has cautioned US leaders that China’s Xi was “serious” in his recent warning to Beijing’s adversaries, and took it as a sign of the People’s Republic’s “aggressive” intentions.

“The Chinese can see weakness, they can see an administration that’s not prepared to respond in the way the Trump administration did with clarity and force and resolve. This is what it’s going to take to deter Xi Jinping. You saw his words today…He is serious, he is competent, he is aggressive, he thinks America is declining. He’s wrong about that but it’s going to take American leadership to prove him wrong,” Pompeo said, speaking to Fox News on Thursday night.

The former secretary of state went on to attack the Biden administration’s policies, suggesting that China was watching as the US military carries out its virtue signaling reforms, and the alleged failures of Washington’s border policy.

“They can see if a president is going to allow folks to run across the southern border. Surely they’re not going to stop the Chinese from running across a Taiwanese border. These are the kinds of things the world perceives, they’re watching so closely everything this administration does,” Pompeo said.

“The Chinese Communist Party wants a singular thing – they want global hegemony. We should believe what Xi Jinping says, he’s been at this for a while. And while they used to hide their strength and bide their time, they’re now getting aggressive. It’s going to require an American response that matches that,” Pompeo concluded.

The former top US diplomat and CIA chief, who once admitted that his job at the intelligence agency included "lying, cheating and stealing," did not specify which actions by China demonstrated its alleged drive for “global hegemony” or its “aggressive” behaviour.

© AFP 2021 / ANDY WONG
US Secretary of State Mike Pompeo (L) shakes hands with Chinese President Xi Jinping as they pose for photograph at the Great Hall of the People in Beijing on June 14, 2018

China maintains just one military base overseas – in Djibouti, Africa, compared with nearly 800 US military facilities worldwide, including a 400,000 troop-strong force in the Asia-Pacific region near China’s borders. At the same time, unlike the United States, China does not carry out so-called "freedom of navigation" operations in territories claimed by Washington, and has not sanctioned or otherwise threatened US officials and entities over the country’s internal matters, as the US has in relation to Hong Kong, Xinjiang and Taiwan.

Xi’s remarks in Beijing on Thursday about foreign powers getting their “heads bashed and bloodied” if they “bully” China have been translated several ways. While Western media and news agencies including Reuters, the New York Times and the Washington Post have used the “heads bashed” translation, the official translation of Xi’s remarks provided by the Xinhua News Agency is somewhat different, and reads:

“As a nation, we have a strong sense of pride and confidence. We have never bullied, oppressed or subjugated the people of any other country, and we never will. By the same token, we will never allow any foreign force to bully, oppress, or subjugate us. Anyone who would attempt to do so will find themselves on a collision course with a great wall of steel forged by over 1.4 billion Chinese people.”

China Won't Be Bullied, 'Anyone Who Dares Try Will Have Their Heads Bashed Bloody', Xi Jinping Warns