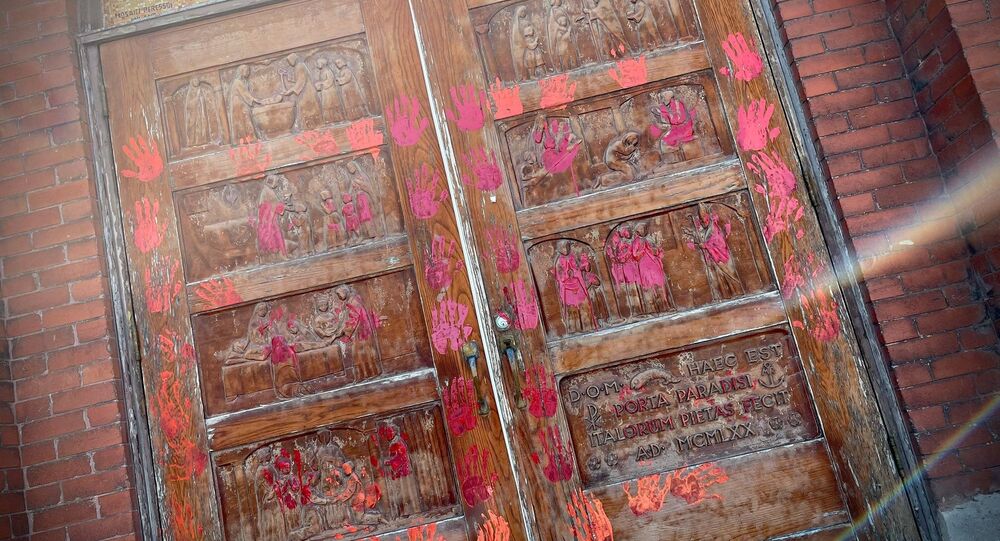 Gruesome discoveries of hundreds of unmarked graves near former residential schools across Canada, where indigenous children were once forced to assimilate, have sparked harsh feelings among locals in the wake of Canada Day. The celebrations have been marred by protests among indigenous people that have launched vandal attacks.

Ten churches were vandalized with orange and red paint in Alberta on Canada Day (1 July), with authorities linking the acts to recent discoveries of unmarked graves at the sites of former residential schools.

Most vandalised churches were Catholic, as coloured handprints and the number 215 were left imprinted on their premises between Wednesday night and Thursday morning, according to Calgary Police. In one case, paint was thrown inside the church through a broken window.

Calgary Police say that "the locations vandalised are all part of the Christian faith".

“Vandalism like this is not just illegal; it serves to create further division, fear and destruction in our city. We need to find the people responsible, both to hold them accountable and to prevent further divisive incidents,” the police said in a statement on Thursday.

In May, the remains of 215 indigenous children were found in unmarked graves at a former residential school in Kamloops, British Columbia, leaving the nation shaken in a memory of compulsory boarding school system that forced thousands of Indigenous children to undergo cultural assimilation. The system, which was largely overseen by religious organisations (mostly Catholic), was only finally shut down in the 1970s. But authorities have long seen calls from indigenous communities seeking the truth about what was going on in the facilities, as many children who were removed from their families later died in the schools as a result of illnesses. The bodies of the children were often not returned to their parents.

Apart from the Kamploops mass grave, more suspected graves were later discovered in Saskatchewan and the Lower Kootenay Band in BC, sparking a further outcry from communities.

Despite condemning the incidents, Calgary Police described the residential school system in a statement as “a very dark part” of Canada’s history that “destroyed the lives of countless Indigenous families”.

"The recent discovery of these graves further supports the tragic and heartbreaking stories that Indigenous people have been sharing for many decades,” they added in the statement.

Alberta's Premier Jason Kenney called the vandalism of churches across the province “appalling”.

"This happened today at an African Evangelical Church in Calgary. The congregation is made up entirely of new Canadians, many of whom came here as refugees fleeing countries where churches are often vandalised and burned down,” the premier said.

These folks came to Canada with the hope that they could practice their faith peacefully. Some of them are traumatized by such attacks.

This is where hatred based on collective guilt for historic injustices leads us. Let’s seek unity, respect & reconciliation instead.

Apart from vandalism incidents, a Catholic church was burned down to the ground in Morinville, Alberta on Wednesday, with authorities suggesting that fire resulted from an arson.

Monuments of Queen Victoria and Queen Elizabeth II have also fallen victim of enraged crowds in Winnipeg on Canada Day. They were both toppled on Thursday, Queen Victoria’s statue has also been defaced and vandalised with handprints in a similar fashion to churches in Alberta.