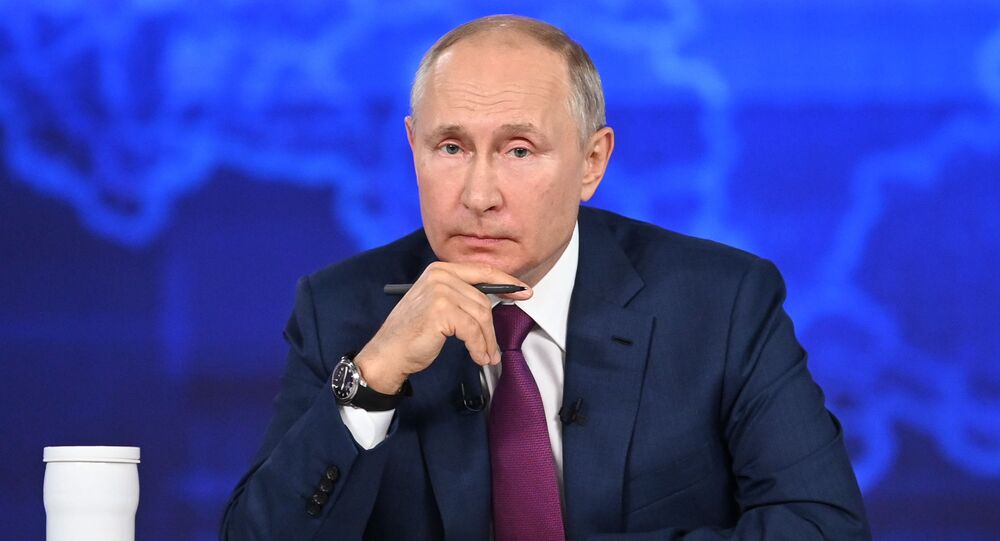 Vladimir Putin: US Understands That World is Changing But Still Wants to Preserve Dominant Position

The Russian head of state made the statement during his annual Q&A session during which he answers questions from the public. The coronavirus pandemic, environmental issues, and economic crisis are on the agenda of this year's event.

Vladimir Putin has said the United States understands that the world is changing, but still wants to preserve a dominant position.

"I hope in this changing world, [the US] will rethink its own priorities and interests, and it will lead to the world order that will eventually take [on] a more attractive character", the Russian president said.

Putin emphasised that renowned US pundits have discussed the issue with American authorities and explained to them that the days of a unipolar world order are gone and one has to act bearing in mind that the world is changing.

"Provocations, sanctions, military exercises – this all comes from Washington's desire to preserve its hegemony", Putin said.

According to Putin, in this situation much will depend on current President Joe Biden, although he admitted that there are certain checks and balances in the US political system.

US Attitude Towards its Partners

"Russia is developing regardless, its economic sovereignty is strengthening, defence capability has reached a very high level, and has surpassed many countries in the world in a number of crucial parameters, including the US", he said.

At the same time, Putin stressed that when the United States crosses the line, Moscow finds asymmetric methods of response that its partners are quite sensitive to.

"By the way, their traditional partners, even allies, do you think they are happy about the way they are being treated? No one likes it", he said.

Ties between Moscow and Washington have been strained for the past decade, with the US accusing Russia of election meddling, cyberattacks, and hostile acts against American interests, allegations vehemently dismissed by the Kremlin.

A recent summit between Joe Biden and Vladimir Putin was hailed as positive and productive, with both sides agreeing to hold additional rounds of talks on cybersecurity and arms control. Both presidents also agreed to return each country’s ambassador back to their capitals.